The mechanical energy harvester, which is flexible enough to conform to the surface of an organ such as the heart, converts the organ's motion into electricity. (Photo: Univ. of Illinois/UA)

Tiny power generators developed by the University of Arizona and the University of Illinois could eliminate the need for batteries in medical devices.
Daniel Stolte
,
University Communications
Feb. 3, 2014
Resources for the Media
Extra Info: 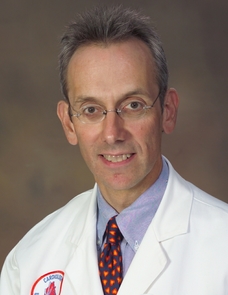 Dr. Marvin Slepian is a professor in the UA College of Medicine.
Researchers at the University of Arizona and the University of Illinois have developed tiny power generators that can convert the motion of a beating heart into electrical energy.
The technology means that tomorrow's pacemakers may not need to be removed to have their batteries replaced, sparing patients from invasive medical procedures.
The research team successfully implanted polymer-based “nanogenerators” that convert mechanical energy from a beating heart into an electric current that can be used to power medical devices. The researchers reported their results in the journal Proceedings of the National Academy of Sciences, or PNAS.
"This is the first time we were able to successfully and safely harness energy from mechanical biological motion and convert it into electricity with a realistic system that may in the future be used clinically," said Dr. Marvin J. Slepian, director of interventional cardiology and professor of medicine at the UA Sarver Heart Center with a joint appointment in the UA Department of Biomedical Engineering. "The generated electricity could be used to power, recharge or augment the battery capabilities of present battery-powered devices."
The miniature devices consist of piezoelectric nanoribbons sandwiched between two thin layers that serve as electrodes, one made of titanium and platinum and the other made of chromium and gold. Piezoelectric elements are crystals that generate an electrical current when deformed under mechanical pressure and are used in many applications, such as disposable lighters and mini speakers.
Led by University of Illinois engineering professor John Rogers, director of the Seitz Materials Research Laboratory, the team created bendable piezoelectric strips capable of attaching and conforming to soft and slippery surfaces of internal organs and flex with their movement. Canan Dagdeviren, a member of the Rogers lab, patiently led the fabrication efforts for these piezoelectric constructs. These prototype devices were then brought to Arizona for further research and testing.
Under the rhythmic contraction of the heart muscle, the strips bend and relax, enabling the piezo-electric crystals to convert the movement into tiny electrical signals. According to the researchers, the devices used in this study were able to supply enough trickle charge – a steady stream of charging current at low rate – to satisfy the needs of a pacemaker.
"Our advancement is to make the tiny power generators conformal so they move with living tissue, particularly when attached to internal organs," said Slepian, who has had a long-standing collaboration with Rogers.
"Many of the therapeutics we use today go beyond drugs and instead are device-based," Slepian explained. "Think of pacemakers and defibrillators, ventricular assist devices and the Total Artificial Heart. All these and future devices require power."
"Current devices rely on batteries and therefore have to be taken out when the batteries need replacement," Slepian said. "Wouldn't it be nice to have a recharge and trickle system that can charge the batteries all the time? That is where we are coming from."
While this study involved using the piezoelectric generators to harvest power from the heart, they also could be used to harness the motion of the lungs and other organs too. Ultimately, the goal is to make medical devices that no longer rely on batteries at all.
Extending battery life of implanted medical devices or eliminating the need for replacement altogether would spare patients repeated operations and the risk of resulting complications. Another possible application is in health monitors worn outside the body on the skin, which could be powered by this technology.
The research collaboration included Dr. Zain Khalpey, who joined the UA Department of Surgery last year as an associate professor and director of clinical and translational research.
Because of the needs for this technology in applications related to cardiovascular devices, the UA and the University of Illinois filed a joint patent.
"This is a great example of inter-university collaboration," Slepian said. "We hope in the future to be able to commercialize this advance in a startup spin-out company in collaboration with Tech Launch Arizona."
Topics:
Health
Science and Technology
Share This
Related