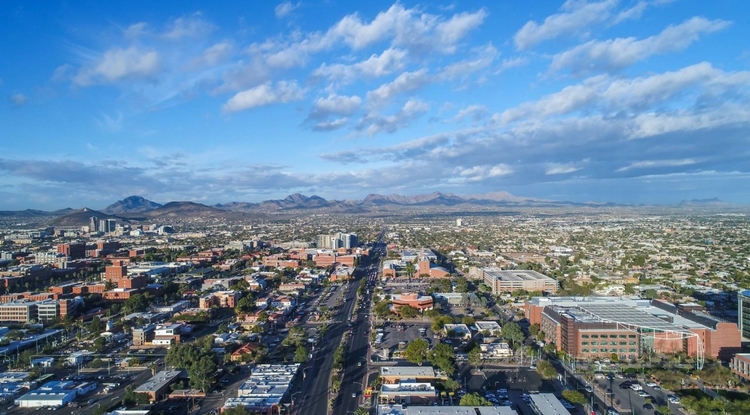 Researchers hope to improve traffic efficiency and safety on Speedway Boulevard, which runs from east to west through Tucson and the University of Arizona campus. (Photo: Jim Robison/City of Tucson)

One civil and architectural engineering and mechanics professor aims to optimize traffic signal timing and improve the commute on Speedway Boulevard.
Emily Dieckman
,
College of Engineering
Nov. 18, 2019
Resources for the Media 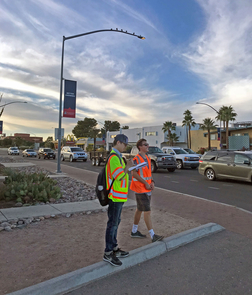 Xiaofeng Li, a graduate research assistant in Wu's lab, and Alex Weber, who earned his Masters of Engineering from UArizona in 2018, conduct research on Speedway Boulevard. 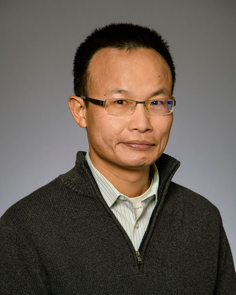 Every day, an average of 41,000 vehicles travel along Speedway Boulevard, which runs from east to west through Tucson and the University of Arizona campus. The drivers of many of those vehicles have experienced the frustration of being stopped at a traffic light for longer than they’d like, a problem one University of Arizona researcher is trying to fix.

Civil and architectural engineering and mechanics professor Yao-Jan Wu, who specializes in data-driven solutions to traffic operations issues, is working with the City of Tucson to ease traffic congestion by optimizing the timing of traffic lights.

“It would be nice to help all drivers get green lights all the time, but of course, that’s impossible,” Wu said. “Our goal is not only to improve traffic efficiency, but also traffic safety.”

Wu and his Smart Transportation Laboratory team are heading into the third year of a partnership with the City of Tucson, which has provided $375,000 for the work so far. On a road as busy as Speedway, this research is critical: A 2017 study by Wu’s group showed that at the intersection of Speedway Boulevard and Campbell Avenue, each vehicle was delayed an average of 42.7 seconds during weekday peak hours. That’s about 264,343 hours of delay annually from one intersection alone.

Wu needs a lot of data to identify the most efficient traffic signal patterns, so he gathers it from a variety of sources. Traffic light controllers and optical sensors at intersections along a 6.38-mile section of Speedway plus third-party provider supply data about the number of cars passing by and how much time drivers spend stopped at lights. Researchers also collect information themselves. They navigate Speedway in vehicles equipped with phone-based GPS systems, recording their time spent waiting at signals and traveling from point to point.

There are myriad options for traffic signal timing patterns, even within a seemingly simple action, such as a left turn. Wu’s job is to recommend to the city traffic light patterns that balance efficiency and safety.

All intersections along Speedway use a lagging left turn sequence, in which the through green light comes before the left turn green arrow. In leading left turns, the left green arrow comes before the through green light. However, since traffic flows in both directions, there’s also an option to combine the two approaches. In a lead-lag left turn, one direction turns left before going straight, and the other goes straight before turning left.

A wide body of research indicates that lead-lag turn phasing is one of the most effective ways to improve traffic flow, and Wu and his team conducted simulations to show that this holds true for Speedway’s traffic conditions as well. In the morning peak hours, for example, 20% more cars were able to make it from one intersection to the next without stopping.

“Lead-lag has been done before in many places, and I’m helping the city understand the mechanics of it,” Wu said. “My job is to use data to tell the city what will work and why it works. And if it doesn’t work, I can use data to show what went wrong and how it can be better.”

City and county officials are currently considering Wu’s recommendations. The process of changing traffic signal timing patterns takes time and involves an awareness campaign for drivers, who are used to the current lagging left turn sequence.

When the approach is in place, Wu and his team will work with the city to continually evaluate and improve the flow of traffic.

In intersections that use permissive-protected left turns, the team recommends that the option to turn left after checking for oncoming traffic be indicated by a flashing yellow arrow. The flashing motion makes turns safer by reminding drivers to check carefully for pedestrians and other vehicles from the opposite direction before turning.

Studies show drivers are more likely to respond correctly to flashing arrows than green lights. In fact, one study Wu and his team cited found that left turn-related crashes were reduced by 21% after implementing a flashing yellow arrow.

“Due to the success of our collaborations so far, we are working together with multiple jurisdictions to develop data-driven approaches to traffic issues such as pedestrian safety and mixed cyclist and vehicle traffic,” Wu said. “We are also helping the city to be proactive in anticipating the impact of future developments, such as the e-scooter program and advanced traffic operations technologies.”