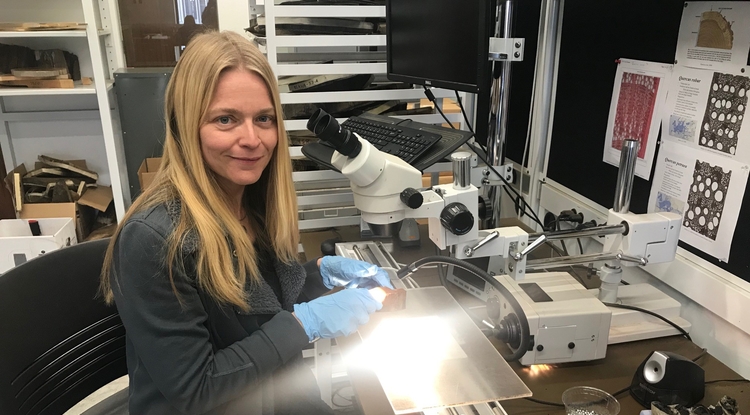 Charlotte Pearson holds the tree sample containing the light ring that might mark the date of the Thera eruption. (Photo: Mikayla Mace)

Research led by the University of Arizona Laboratory of Tree-Ring Research has anchored a long sequence of tree rings, providing context for the civilizations that existed throughout the Bronze and Iron Ages.
Mikayla Mace
,
University Communications
March 30, 2020
Resources for the Media

The tree rings that make up the Gordian chronology were sourced from timbers that made up the tomb casing in the Midas Mound Tumulus at Gordion in Turkey. (Photo: Richard Liebhart) 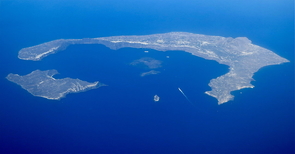 The Santorini Caldera is what's left behind from the Thera eruption. (Photo: Steve Jurvetson) 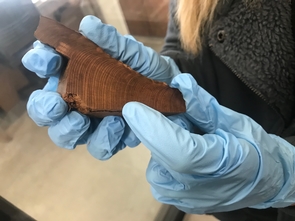 Charlotte Pearson points to the light tree ring that could mark the year of the Thera eruption. (Photo: Mikayla Mace)

Charlotte Pearson's eyes scanned a palm-sized chunk of ancient tree. They settled on a ring that looked "unusually light," and she made a note without giving it a second thought. Three years later, and armed with new methodology and technology, she discovered that the light ring might mark the year that the Thera volcano on the Greek island of Santorini erupted over the ancient Minoan civilization. The date of the eruption, which is one of the largest humanity has ever witnessed, has been debated for decades.

Pearson, a University of Arizona assistant professor of dendrochronology and anthropology, is lead author of a new paper, published in Proceedings of the National Academy of Sciences, in which she and her colleagues used a hybrid approach to assign calendar dates to a sequence of tree rings that span the period during which Thera erupted, to within one year of a calendar date. This allows them to present new evidence that could support an eruption date around 1560 B.C.

"In every tree ring, you have this time capsule that you can unpack," Pearson said.

Trees grow in accordance with the conditions of their local environment. Each year, trees produce a new layer of concentric growth, called a tree ring, which can record information about rainfall, temperature, wildfires, soil conditions and more. Trees can even record solar activity as it waxes and wanes.

When a sequence of rings from trees of various ages are overlapped and added together, they can span hundreds or thousands of years, providing insight about past climate conditions and context for concurrent civilizations.

"The longest chronology in the world stretches back 12,000 years. But in the Mediterranean, the problem is that we don't have a full, continuous record going back to the time of Thera," Pearson said. "We have recorded the last 2,000 years very well, but then there's a gap. We have tree rings from earlier periods, but we don't know exactly which dates the rings correspond to. This is what's called a 'floating chronology.'"

Filling this gap could help pin down the Thera eruption date and paint a climatic backdrop for the various civilizations that rose and fell during the Bronze and Iron ages, which together spanned between 5,000 and 2,500 years ago.

"Until you can put an exact year on events on a scale that makes sense to people – one year – it's not quite as powerful," Pearson said. "This study is really about taking (my co-author and tree ring lab research professor) Peter Kuniholm's chronology that he's put together over 45 years of work and dating it in a way not possible before. Most importantly, it is fixed in time, just as if we had filled our tree ring gap."

Since the inception of the UArizona Laboratory of Tree-Ring Research in 1937, an assortment of tree ring samples from all over the world accumulated in less-than-ideal conditions beneath Arizona Stadium. But since the completion of the university's upgraded Bryant Bannister Tree Ring Building in 2013, the curation team, led by Peter Brewer, has been relocating, organizing and preserving samples for future research.

"This is the collection that founded the field of tree ring research, and it's by far the world's largest," Brewer said. "Researchers come from all over to use our collection."

"It's just crammed full of the remains of ancient forests and archaeological sites, which no longer exist, and it contains wood samples that were fundamental in the growth of the discipline of dendrochronology," Pearson said.

The collection includes timbers from the Midas Mound Tumulus at Gordion in Turkey – a giant tomb of a man that was likely Midas' father or grandfather. From timbers like these, Kuniholm has been building a tree ring chronology from the Mediterranean for nearly a half century.  Together, Kuniholm's record from the B.C. period spans over 2,000 years, including trees growing downwind of the Thera eruption, making it key to the team’s research.

Despite the length of this chronology, it remained undated. To pin it down, the team decided to try something new.

When cosmic rays from space enter the Earth's atmosphere, neutrons collide with nitrogen atoms to create a radioactive version of carbon, called carbon-14, which spreads around the planet. All other life on Earth, including tree rings, pick up the carbon-14, and because tree-rings lock away a measurement of carbon-14 for each year that they grow, they hold patterns showing how carbon-14 levels change over time. These patterns of carbon-14 in tree rings around the world should match.

Pearson and her team used the patterns of carbon-14 captured in the Gordion tree rings to anchor the floating chronology to similar patterns from other calendar-dated tree ring sequences.

"It's a new way to anchor floating tree ring chronologies that makes use of the annual precision of tree rings," Pearson said.

To validate their findings, the team turned to the calendar-dated rings of high-elevation bristlecone pines from western North America that lived at the same time as the Gordion.

"When there are large volcanic eruptions, it often scars bristlecone by freezing during the growing season, creating a frost ring," said second author Matthew Salzer, research scientist at the tree ring laboratory. "Then we compared the dates of the frost rings with what was going on in the Mediterranean trees, which respond to volcanoes by growing wider rings. And it worked. It showed that the wide rings in the Mediterranean chronology occurred in the same years as the frost rings in the bristlecone. We took that to be confirmation that the dating was probably correct."

The team then thought to use a new piece of technology in the lab, called the X-ray fluorescence machine, to scan the wood for chemical changes.

"We scanned the entire period across when Thera is known to have happened," Pearson said, "and we detected a very slight depletion in calcium, right where I saw this lighter ring years ago."

While it's a slight fluctuation, it is significant and only occurs at one point in the years around 1560 B.C.

"We put that in the paper and tentatively suggest it's a possible date for Thera," Pearson said.

Something changed the chemistry of the environment in which the tree grew; acid deposition from a volcano is one possibility, wildfire is another, but because the date happens to coincide with other tree ring markers for a major eruption, Pearson she says it's worth further exploration.

"I think to do good science you have to investigate everything and keep an open mind until sufficient data comes together," Pearson said. "This is another little piece of the puzzle."