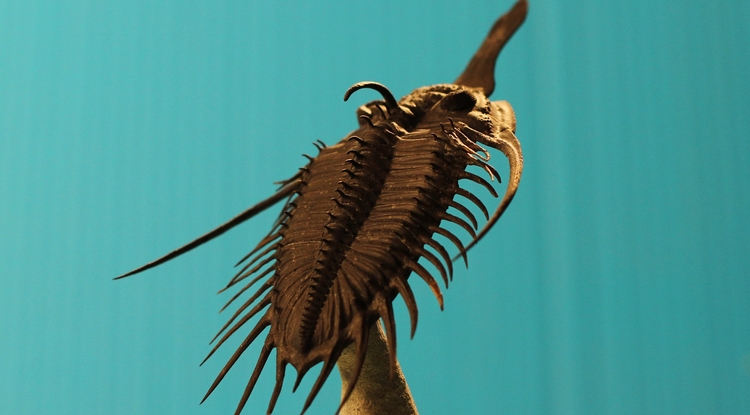 Psychopyge, a spectacular trilobite that lived in the Upper Devonian – about 370 million years ago. Specimens have been found in Germany and Morocco. (Photo: Flandrau Science Center)

Trilobites Were the First Arizonans

Trilobites are among the oldest known species in the fossil record, and their fossils are found in abundance in the state. A new Flandrau Science Center exhibit at the UA showcases the amazing creatures and what they have taught us about life on Earth.
Raymond Sanchez, NASA Space Grant Science Writing Intern
,
University Relations – Communications
Feb. 9, 2015
Resources for the Media
Extra Info: 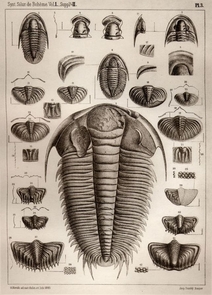 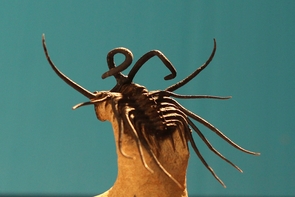 Dicranurus, a trilobite roaming the bottom of a shallow sea separating Euramerica and Gondwana roughly 380 million years ago. Its fossils have been found in Oklahoma and Morocco. (Photo: Flandrau Science Center)

Go back in your imagination millions of years, to a time when much of the American Southwest was a vast ocean teeming with ancient life. Few Arizonans would suspect that their arid desert home once belonged to one of the oldest and most unique aquatic species in the fossil record: the trilobite.

More than 20,000 species of trilobite have been documented to date. Although they all share a hard exoskeleton and jointed limbs, the creatures exhibit a stunning array of morphological diversity and ranged from less than an inch to more than two feet in length.

The creatures also are considered the first to have developed compound eyes like those found in flies and other modern arthropods. Some species had up to 15,000 lenses in a single eye. Since their eyes were composed largely of the mineral calcite, they are well preserved in trilobite fossils, allowing scientists insight into the humble beginnings of one of evolution’s most masterful innovations.

The mystique and intrigue of trilobites go way beyond their unparalleled diversity and alien appearance. Trilobite fossils have provided crucial evidence needed to advance the development of a number of scientific fields, including basic geology, plate tectonics and evolutionary biology.

Remarkably, the evolution of trilobites is extremely well represented in Arizona’s fossil record. Some of the earliest known trilobite species have been found in sedimentary rock layers at the bottom of the Grand Canyon, while the most recent examples of trilobite life have been discovered in its topmost layers. In fact, early trilobite finds in the Grand Canyon were critical in shaping Arizona’s public lands policies, and the state is now considered a hub for hunting trilobite fossils.

To celebrate one of Arizona’s most ancient residents, the Flandrau Science Center and Planetarium on the University of Arizona campus has opened a new exhibit, "Meet the Trilobites: Arizona’s First Inhabitants," which features more than a hundred high-quality fossils collected from all across the globe.

Robert and Margaret Hazen recently donated many of the specimens on display to the UA Mineral Museum. Robert Hazen, a renowned trilobite collector, is a mineralogist and astrobiologist with the Carnegie Institution for Science in Washington, D.C.

"There’s immense morphological diversity represented in this exhibit," said Jake Skabelund, a trilobite expert who also donated fossils and helped put together the exhibit. "We have specimens on display from nearly every continent."

"The trilobites on display here are truly incredible," said Bill Plant, exhibits director at Flandrau. "They have a lot to teach us about the history of life on Earth."