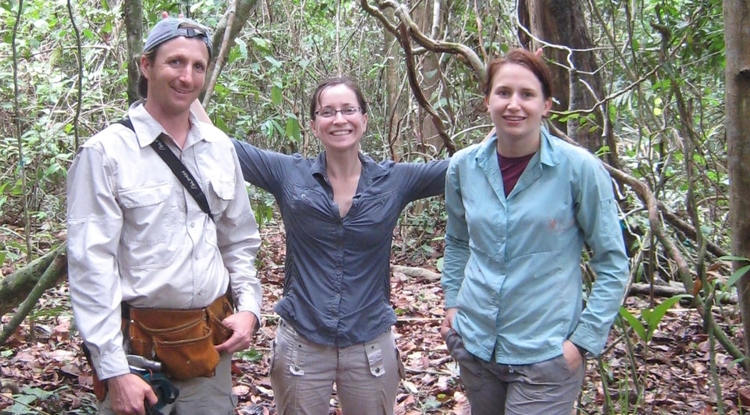 Brian Enquist, Vanessa Buzzard and Amanda Henderson taking a break from setting up a plot at the Smithsonian Tropical Research Institute Barro Colorado Island in the Panama canal in 2012. (Courtesy: Brian Enquist)

From the Tropics to the Boreal, Temperature Drives Ecosystem Functioning

University of Arizona researchers found a tight link between temperature and plant and microbe communities within forests, which will allow them to predict how ecosystems might respond to climate changes.
Mikayla Mace
,
University Communications
Sept. 4, 2019
Resources for the Media 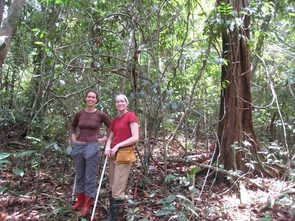 Julie Messier and Vanessa Buzzard wait to start a new transect in a Panama forest, holding a 2 meter stick as a guide. (Courtesy: Brian Enquist) 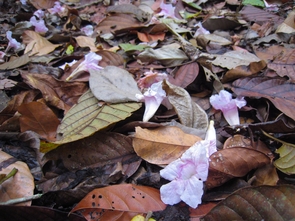 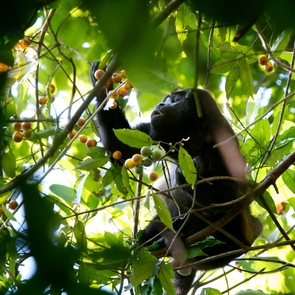 A monkey having a snack in a Panama forest in 2012. (Courtesy: Brian Enquist) 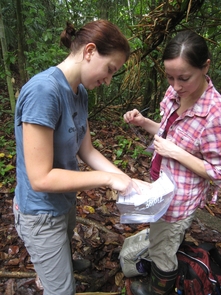 Amanda Henderson and Vanessa Buzzard planning their next plot and referring to the map to make sure they are in the right place. (Courtesy: Brian Enquist)

University of Arizona ecology and evolutionary biology processor Brian Enquist and former doctoral student Vanessa Buzzard trekked across the Americas: from moist, tropical jungles in Panama to the frigid boreal forests in Colorado to the wet temperate forests of the Pacific Northwest. Along the way, they collected soil samples, enveloped trees in belts to measure growth on a fine scale, and planted sensors that continue to collect data on soil moisture and temperature, which varies widely between forests.

But by measuring and comparing the traits of diverse species to understand how they function in their environment across a range of temperatures, the team uncovered how temperature influences an ecosystem. They found that temperature drives coordinated shifts in the functional traits between plants and microbes that influence ecosystems, according to Buzzard, who is the lead author on the paper published in Nature Ecology and Evolution on Aug. 19.

“The work represents an unprecedented monitoring of soils and forests from hot tropical forests to the cold boreal forests and fills important gaps in our ecological understanding of how organisms within different levels of an ecosystem’s food chain are linked via temperature,” Enquist said of the project that began in 2011. “The work involved much field work in remote locations, lab work associated with analyzing soil microbial DNA and computer analyses using large datasets.”

As an example, bacteria within certain communities have genes tailored by evolution for cycling the nutrients that are naturally available within their ecosystem. The team saw a shift in the genes tied to nutrient cycling for bacteria as temperatures differed across sites.

“As you increase the latitude – so, cooler temperatures – we have a nitrogen limitation. We expect that to influence the structuring of these communities, both plants and microbes,” Enquist said.

In tropical forests, on the other hand, trees quickly grow and shed very broad leaves. That means these “throw-away leaves,” as Buzzard put it, constantly fall to the floor for microbes to consume. The research team saw a lower abundance of genes in the local microbes for processing carbon. In forests with pine trees that sprout and drop dense, narrow leaves, the local bacteria had different functional traits: They have a greater abundance of carbon-cycling genes to handle the complex-difficult to access large pools of carbon that is available in temperate regions. It’s like eating lettuce (tropics) verse eating bark (temperate regions), according to Buzzard.

“We can use this understanding to make predictions about how we expect soil microbial communities to function as climate changes,” Buzzard said. “If temperature drives the observed shift in plant and bacterial functioning, ecosystems subjected to climate warming should also experience directional shifts in functional diversity and biogeochemistry.”

That shift might happen too quickly for ecosystems to adapt. She also added that diversity is not solely driven by temperature. There could be other constraining factors that could be teased out in another study.

Next, Buzzard said the team will install more sites to collect more data. They also want to monitor how growth rates in plants vary across ecosystems with differing temperatures. This means much more time in the field, but that’s no problem for Buzzard. She spent at least six months a year for the first three years of the study in the field: “I really enjoyed being in the field. There are long days. They’re hard, but you get to go see these amazing places and have unique interactions with the wildlife.”

Funding for this study was provided by the National Science Foundation MacroSystems Biology program (NSF EF-1065844).