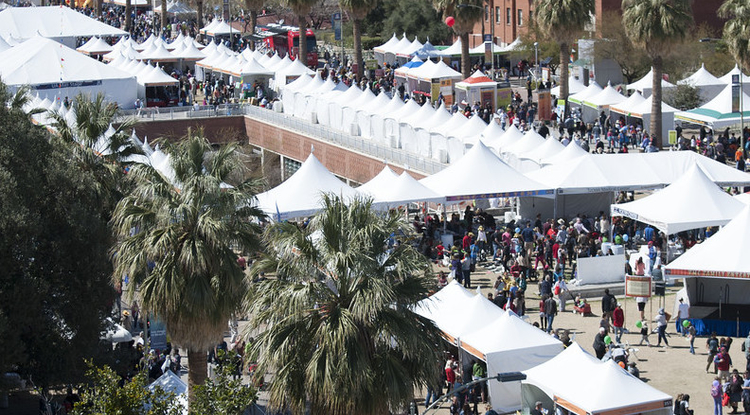 Science City at the Tucson Festival of Books.

For complete information and schedules for the Tucson Festival of Books, visit the event's website.

The Tucson Festival of Books, a community-wide celebration of literature believed to be the third-largest in the U.S., returns to the University of Arizona campus for its 11th year. More than 130,000 literature and science lovers are expected to take part in the two-day festival, which features more than 300 presenting authors in three dozen venues.

The festival, founded by the university and the Arizona Daily Star, features a variety of presentations and panel discussions from nationally renowned authors, poets, columnists, political scientists, essayists, scientists and storytellers.

Luis Alberto Urrea, a finalist for the Pulitzer Prize in non-fiction for his acclaimed book "The Devil's Highway," will receive the event's Founders Award on Friday night. Urrea, who has presented at the Tucson Festival of Books since its debut in 2009, is the author of 17 best-selling books, including his latest novel, "The House of Broken Angels."

Urrea will take part in "Fuerza," a conversation with fellow author Ron Querry about the role strong women of color play in their most prominent work. The talk will take place at the Nuestras Raíces/Presentation Stage at 10 a.m. on Saturday. Urrea will also speak at 1 p.m. in the Koffler Room (204) on Saturday.

A variety of UA-affiliated authors, researchers and thought leaders will take part in the festivities, including:

The festival also features the popular Science City, sponsored by the UA BIO5 Institute and UA College of Science in association with the UA College of Agriculture and Life Sciences and in partnership with the Arizona SciTech Festival.

Science City's themed "neighborhoods" include the Science of Everyday Life, Science of the Natural World, Science of Tomorrow, Science of Food, Science of You, and Science in Art. In those areas, nearly 100 unique participant groups will represent various campus units, local businesses, and industry and nonprofit organizations. Faculty, students, staff and volunteers from a host of UA programs will be on hand in Science City to share their passion for science, technology and innovation.