Rising senior Benjamin Cromey and rising junior Travis Sawyer, both University of Arizona undergraduates in the optical sciences and engineering program, are winners of the 2014 Astronaut Scholarship.
Kristin Waller
,
College of Optical Sciences
July 9, 2014
Resources for the Media 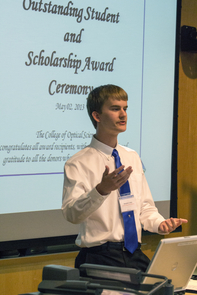 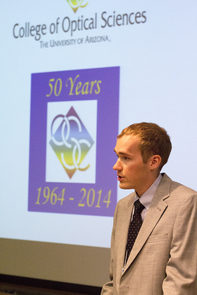 Two University of Arizona undergraduates have been named winners of the 2014 Astronaut Scholarship, which was founded by six members of the original Mercury 7 mission.

Rising senior Benjamin Cromey and rising junior Travis Sawyer will each receive $10,000 toward their next year of study, to be officially presented in the fall by a member of the Astronaut Scholarship Foundation. Both are in the optical sciences and engineering program, which is jointly administered by the College of Optical Sciences and the College of Engineering.

The ASF funds an average of 28 awards each year to students at 27 participating universities. It has provided over $3.7 million to talented students in the STEM fields – science, technology, engineering and math – since 1986. Today, more than 100 astronauts contribute to the program.

Candidates for the scholarship are nominated by faculty members, with each participating university selecting two nominees showing initiative, creativity and excellence in their chosen field. This is the first year that two UA students have been recognized.

"The Astronaut Scholarship represents the acknowledgement of the tight relationship between space exploration and strong engineering," said Jeff Goldberg, dean of the College of Engineering. "It is these same engineering processes that improve our quality of life with systems and devices that are ubiquitous to our everyday functions, including health care delivery, water treatment, energy production and storage, communications and more."

Both Cromey and Sawyer are active in the college, now celebrating its 50th year. They serve as Optics Ambassadors, and Cromey is the outreach coordinator for the UA Student Optics Chapter. In addition to these latest honors, they have been awarded scholarships from the college and the professional society SPIE.

He attributes his interest in science and technology to his father, who works as a biological microscopist at the UA College of Medicine. "He'd often take me to see his work," Benjamin said, "and seeing cells through a microscope was really cool."

What drew him to optical sciences specifically, however, was a presentation given by a group of Optics Ambassadors at a career fair during his junior year of high school. He later attended a one-week optics camp at the College of Optical Sciences, at which time he toured Blanche's 3-D display lab – where he now performs his own research.

Cromey is spending the summer in Bothell, Washington, working for Lockheed Martin on very high-powered lasers for defense applications. After completing his bachelor's degree, he plans to pursue a doctorate in optics and then work in a national laboratory or aerospace and defense company before returning to academia.

Travis Sawyer, a member of the Honors College, was nominated by associate professor of materials science and engineering Robert Erdmann, who also holds an appointment in the applied mathematics program. Sawyer joined the Erdmann research group, where he works on image processing and software development, a year and a half ago.

Sawyer had a particularly unique introduction to the world of optics. His freshman year at UA, he was mistakenly diagnosed with leukemia. He underwent a battery of tests and scans as physicians sought more information about his condition. "During this time, I was exposed to a multitude of optical instruments and devices," Travis said. "I quickly became fascinated with the technology and the unique information it provides on what is otherwise invisible or inaccessible."

This summer, Sawyer is in Stuttgart, Germany, performing research in illumination and radiometry at the Institute of Applied Optics. He also works as a software consultant for a Dutch research group, providing data visualization, analysis and digital infrastructure. He, too, plans to pursue a doctorate and spend time in an industry setting before returning to academia.

"Hopefully," he said, "I can make a contribution or invent a technology that helps someone else in the same way optics helped me."