Scientists from three departments were given the Partners in Conservation award by Interior Secretary Ken Salazar.
Jeff Harrison
May 7, 2009
Resources for the Media
Extra Info:

Department of Agricultural and Resource Economics 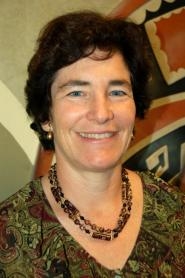 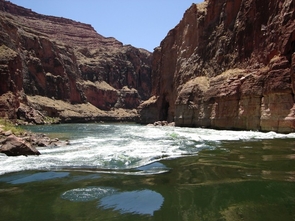 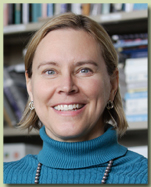 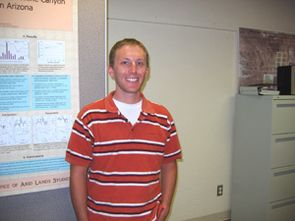 Three units at The University of Arizona were honored by Secretary of the Interior Ken Salazar at a ceremony in Washington, D.C.

The U.S. Department of the Interior's "Partners in Conservation Award" was presented to the Laboratory of Tree Ring Research, Department of Agriculture and Resource Economics and the Arizona Water Institute on May 7.

Kathy Jacobs, director of the Arizona Water Institute at the UA, accepted the award on behalf of the units and research team at the University.

Jacobs, Connie Woodhouse, David Meko, Bonnie Colby and Dustin Garrick, along with other members of a UA team, contributed to an Environmental Impact Statement, or EIS, associated with new guidelines for shortage sharing and cooperative management of Lake Mead and Lake Powell on the Colorado River.

The resulting "Interim Guidelines" are a major amendment to the "Law of the River," which is a collection of dozens of laws, court findings and operating agreements dating back to 1922.

Multiple other water management entities, non-governmental organizations and research groups were also recognized by the U.S. Secretary of the Interior, including the Arizona Department of Water Resources.

The new agreement, which was adopted at the end of 2007, was based on thousands of pages of documents, including the results of several innovative new modeling techniques.

The EIS was particularly noteworthy in that it addressed the implications of climate change on the Colorado River. Terry Fulp, now the deputy regional director for Reclamation, led the process.

The UA team has been working together for four years in partnership with the U.S. Bureau of Reclamation, evaluating the use of both short-term and long-term climate information in managing the Colorado River.

The project includes investigators from five UA departments: Peter Troch, a professor of hydrology and water resources; Kathy Jacobs from soil, water and environmental science; Bonnie Colby, a professor of agricultural and resource economics; Connie Woodhouse, an associate professor of geography and regional development; and David Meko, an associate research professor in the Laboratory of Tree Ring Research.

The project is unique in many respects, including the fact that the research group responds in "real time" to the research needs of the Bureau of Reclamation as it makes management decisions on the Lower Colorado River. A parallel research group at the University of Colorado provides support to the Upper Basin management program.

"This was a major ground breaking effort, a very difficult thing to do, to get so many scientists and stakeholders in the Colorado River Basin to agree to a new process for sharing water in time of shortage," said Jonathan Overpeck, a professor of geosciences and director of the UA Institute for Environment and Society. "It's significant that UA scientists covering a broad range of sciences were at the forefront in being able to convince all of the decision makers that they really did have to plan for lower flows in the Colorado."

The contributions of the team include:

Woodhouse and Meko, in collaboration with other colleagues, developed tree ring chronologies that were used to reproduce river flows at Lee's Ferry more than a thousand years prior to the gaged record. New tree-ring collections making use of logs, stumps and standing snags were exploited to push the record back into the medieval period.

The extended record corroborated earlier findings that suggest the early 20th century – the allocation period for the Colorado River – was one of the wettest in the last millennium. The extended record also identified droughts more severe than any seen in the modern record.This information was used to test the robustness of Colorado River resources to a series of different inflows under several proposed management scenarios.

Woodhouse also was part of the Climate Technical Work Group that provided a historic examination, the first-ever in the context of an EIS, of how climate change could affect flows of the Colorado and how climate change information could be integrated into reservoir operations.

Bonnie Colby, working with Rosalind Bark, a doctoral student at the time, and Lana Jones, a master's student, helped Reclamation staff consider and design the parameters for the socioeconomics portion of the EIS, reviewed the socioeconomics work Reclamation received from their consultants, provided specific recommendations to improve this portion of the EIS and collaborated with non governmental organization's in providing suggestions for improvements in the economic assessments of the alternatives that were considered.

Jacobs also worked with doctoral student Dustin Garrick and Arizona water management stakeholders on assessing the implications of the alternative shortage sharing arrangements. She also participated in reviewing and editing the EIS document.

Garrick participated in the EIS by evaluating the role of modeling assumptions in the river operations model used for long-range planning in the Basin. His analysis responded to Arizona stakeholder interest in comparing alternative management options for coordinating the reservoirs under a full range of water supply conditions.

In addition, Garrick served as the lead in managing the UA team of research associates from multiple disciplines to integrate the paleohydrology, modeling, economic, and management dimensions of the interdisciplinary research effort.

The Enhancing Water Supply Reliability on the Colorado project has contributed to the education of six master's students and four doctoral students during the life of the project, providing an interdisciplinary and applied educational experience that is relatively rare.

In addition, project participants have been very productive, producing more than a dozen peer reviewed publications and multiple presentations.

The team received support from the Technology Research Initiative Fund at the UA and from the Water Resources Research Center, and particularly for personal support from Sharon Megdal, the director of the center, and from Eugene Sander, dean of the UA College of Agriculture and Life Sciences.