Ryan Gabrielson and Paul Giblin, both alumni of the UA's journalism program, received the Pulitzer Prize for local reporting for their expansive investigation into immigration enforcement in the Phoenix area.
La Monica Everett-Haynes and Jeff Harrison
,
University Communications
April 20, 2009
Resources for the Media
Extra Info: 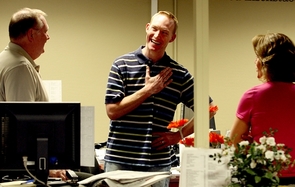 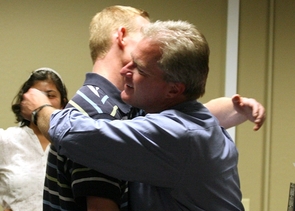 Ryan Gabrielson and Paul Giblin, University of Arizona alums, were given six months while working at the East Valley Tribune to critically analyze from the immigration enforcement in Maricopa County under the direction of Sheriff Joe Arpaio.

Gabrielson and Giblin sought out all angles. They interviewed 100 people, sifted through thousands of pages of police reports and other documents, built databases to cross-reference their work and reported on violations of federal law and slow response times.

Ultimately the project, "Reasonable Doubt," unearthed ways in which the sheriff's intense focus on immigration resulted in the faltering enforcement of other crimes.

The five-part series on Arpaio's policy against undocumented immigrants was published in July 2008 and has earned the pair a Pulitzer Prize for local reporting along with the Detroit Free Press.

"Joe Arpaio is an interesting character, and there was no shortage of news coverage on him," said Giblin, a 1988 graduate of the UA School of Journalism who began his career as a journalist while working for his high school newspaper.

"But we in the newsroom came to the conclusion that while he was getting a lot of coverage, he wasn't getting any in-depth reporting, and that we needed to do some on him," he said.

Giblin said "we lived and breathed this project." After hearing the news, he said: "I haven't gotten my arms around this yet."

The Pulitzer committee said the East Valley Tribune deserved the award because of "adroit use of limited resources to reveal, in print and online, how a popular sheriff's focus on immigration enforcement endangered investigation of violent crime and other aspects of public safety," according to the Pulitzer Prize Web site.

The work was strenuous, but Gabrielson and Giblin remained unyielding.

"It was the drive to find out the truth of what was going on," Gabrielson said. "I kind of get lost in my work, and there was never a point that I was going to quit. We wanted to tell the public what we found."

Giblin, who was laid off from the East Valley Tribune in January, is currently the senior political editor and co-founder of The Arizona Guardian, a Web-based publication devoted to reporting on government and politics.

In fact, he was sitting in on a Senate hearing on immigration issues in Phoenix Monday morning when he learned the news.

In speaking about the value of journalism, particularly during a period of marked declines at newsrooms across the nation, Giblin said: "To me, there is a value in journalism that the world at large ought to know. We don't know what the future is, but we're working awfully hard to make it happen."

Gabrielson also noted, "It's important to remember that in all the hubbub over the collapse of print journalism – financially at least – that there is still a lot being done that plays an important role in the way our society functions. Journalism is one of those critical checks."

David Cuillier, an assistant professor of journalism at the UA, called Gabrielson "an outstanding reporter, one of the best in Arizona and the nation."

Cuillier, a public records expert, is the national chairman of the Freedom of Information Committee for the Society of Professional Journalists and travels to newsrooms around the country training journalists.

"What Ryan does well is use public records so effectively. He (and Giblin) search through everything to make their stories substantive," Cuillier said. "That's why they win these awards."

Mark Woodhams, the director of student media at the UA, said both Giblin and Gabrielson were reporters at the Arizona Daily Wildcat. Gabrielson covered the story of three faculty members in the College of Nursing who were shot and killed by a student in 2002.

"Ryan's award should serve as great inspiration to the current crop of students at the Wildcat," Woodhams said.

Jacqueline Sharkey, director of the UA School of Journalism, said the work of Gabrielson and Giblin "shows clearly why the journalists' most important role is to inform people about the actions of their government."

Sharkey pointed out their use of government records "to demonstrate how Sheriff Arpaio's focus on immigration has compromised public safety," noting that this details reasons why "critical thinking and research are two key elements in journalism. They also are fundamental components of the journalism education we provide at The University of Arizona."

Both Gabrielson and Giblin have earned numerous other awards for their work.

Gabrielson won a national Sigma Delta Chi Award in 2007 for his work on a series investigating fraud and mismanagement within the Maricopa County Community College District.

Also, Gabrielson has received awards from the Society of Professional Journalists and the Arizona Press Club and he and Giblin won the George Polk Award for their immigration enforcement investigation.

"I think we changed the conversation," Gabrielson said, noting that the conversation about immigration moved beyond racial profiling and fear of immigrant communities. "It's not that those were not legitimate, but we showed people that there was way more going on than just those issues."

Gabrielson and Giblin are not the only former UA students to win the Pulitzer.

Nancy Cleeland, a 1977 graduate, was a lead writer on a 2004 Los Angeles Times series about Wal-Mart's labor policies and sourcing practices that won both the Pulitzer and Polk awards.

And UA journalism graduates Frank Sotomayor (1966) and Jose Galvez (1972) were part of a team, also for the Los Angeles Times, that won the Pulitzer for Public Service in 1984 for an in-depth examination of southern California's growing Latino community by a team of editors and reporters.