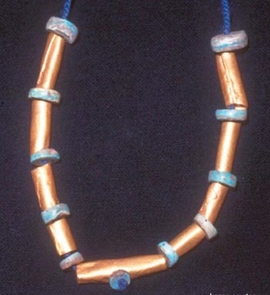 Gold has long been more than a fashion statement, and wearing jewelry and other adornments made of it often connotes prestige. And it did not take long for ancient people to figure that out.

A team of scientists led by an archaeologist from The University of Arizona has unearthed what is, to date, the oldest collection gold artifacts found in the Americas.

The finding suggests that even early groups with limited resources recognized the value of status symbols. The research is published in the current issue of the Proceedings of the National Academy of Sciences.

Mark Aldenderfer, a professor of anthropology at the UA, and his team excavated a site in the Peruvian Andes of South America, near Lake Titicaca. The site, Jiskairumoko, is located in a drainage basin where groups of hunters and gatherers were beginning to make the transition to a more settled existence.

Dates for the Archaic period, when Jiskairumoko was inhabited by these people, are as early as 5,400 years ago and ending about 4,000 years ago.

The site Aldenderfer and the others excavated included a burial that contained a necklace made of turquoise and native gold that had been hammered into shape, and may have belonged to someone with an elevated rank in the community.

Carbon-14 dates for Jiskairumoko range from 2155 to 1936 B.C., making the necklace about 4,000 years old, and some 600 years older than the previous earliest known gold artifacts in South America, or anywhere else in the Americas.

Gold metallurgy is almost exclusively associated with societies with the expertise to create agricultural surpluses and hereditary elite members. Jewelry requires time and skill to create, as well as sufficient capital required to acquire raw materials, a tall order for anyone who survives by subsistence. The surprise of finding gold artifacts at Jiskairumoko is that this site was a simple village.

The artist who created the Jiskairumoko necklace hammered gold until it was flat enough to roll into small cylindrical beads. The nine gold beads were interspaced with several smaller green stones and a turquoise bead in the center.

The materials were not available from the Titicaca Basin, requiring either a trade or a trip of some distance to acquire the gold and turquoise, or the finished necklace.

Evidence from Jiskairumoko supports the hypothesis that the earliest metal industry in the Andes was with native gold. It also offers some insights into ways in which wealthier people in society competed for and acquired power and prestige, pointing the way for generations of rule by hereditary leaders.