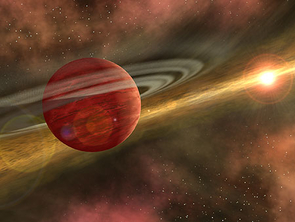 "Out of the Dust, a Planet is Born" - In this artist's conception, a possible newfound planet spins through a clearing in a nearby star's dusty, planet-forming disk. (Image credit: NASA/JPL/R. Hurt, SSC)

Astronomers have observed neon in disks of dust and gas swirling around sunlike stars for the first time.

University of Arizona astronomers who collaborated in the observations say that neon could show which stars retain their surrounding dust-and-gas disks needed to form planets and which stars might already have formed planets.

"When I saw the neon, I couldn't believe it. I was just amazed," said UA Steward Observatory astronomer Ilaria Pascucci. "We were not expecting to see neon around low-mass stars like our sun."

Neon showed up in disks of four sunlike stars in Spitzer's FEPS data. The discovery was a surprise because "we didn't realize that solar analog stars could radiate enough high-energy (X-ray and ultraviolet) light to ionize neon," Pascucci said.

"Astronomers have used ionized neon for years to study massive star formation, novae and the galactic center, all places where the environment is energetic and harsh, so it was a surprise to find this neon emission from planet-forming stars like the sun," Meyer said. "It serves as a valuable reminder that the environment in which the planets formed was harsh, too, in a way. And it could turn out to be an important tracer of remnant gas in circumstellar disks – a kind of 'vacancy/no vacancy' sign for planets."

Neon -- a gas commonly used in outdoor advertising signs since the 1920s -- is one of the few chemical elements that doesn't chemically react to form molecules or condense into solid particles. There's not much of it in Earth's atmosphere, only about 18 parts per million. Nor is it plentiful in gas whirling around stars, Pascucci said.

But when a neon atom absorbs high-energy X-ray or ultraviolet light, it "ionizes," or becomes electrically charged, and gives off infrared light at a specific wavelength. The Spitzer Space Telescope saw the spectral line at 12.8 microns, one of neon's infrared signatures.

So although neon isn't an abundant gas, it is pure, and it radiates infrared light at a specific wavelength when it ionizes, making it useful for tracing planet formation.

Most gas in the disk surrounding a star is swept up by the central star itself. Much of the remaining gas becomes so hot and energetic that it "photoevaporates," or escapes the star system's powerful gravity and evaporates into space. Scientists suspect that if too much gas photoevaporates too quickly, a star has missed its chance to form gas-giant planets.

Scientists believe that planets form when dust particles in the disk around a star begin to stick together and continue to grow by clumping, or "accreting," over millions of years. Some of these planetary building blocks smash together, eventually creating rocky planets like Earth or the cores of gas-giant planets like Jupiter. Ever-larger planetary cores exert greater gravity. If a core becomes massive enough, its gravity becomes powerful enough to pull in gas from the protoplanetary disk, creating an atmosphere.

Gas in the disk may also play a crucial role in making planets suitable for life, Pascucci said. The gas may help to circularize the orbits of planets as they form, as well as provide atmospheres for rocky Earthlike planets and gas-giant planets. Both the orbit of a planet and its atmosphere play an important role in stabilizing climate, a big factor in whether complex life can form and survive.

Astronomers may be able to trace the gas that is needed to circularize the orbits of Earthlike planets in the terrestrial planet region with neon, she added.

Pascucci and the FEPS team published their results in the July 2007 edition of Astrophysical Journal.

Pascucci will make future observations that use neon to track gas content in disks around young stars at different stages of planet formation using NASA's Spitzer Space Telescope and the Very Large Telescope, known as the VLT, in Chile.

"We'll use the Spitzer to look for neon in disks around slightly older systems than we've studied so far," Pascucci said. "Because neon is tracing a very tiny amount of gas mass, we want to see how the gas dissipates with time."

Some of the gas lines are strong enough that astronomers will be able to see the spectra from the ground with the VLT. Pascucci and her colleagues will study 15 candidate objects using the VLT in February 2008. The ground-based telescope is far less sensitive to infrared light than is Spitzer, but it is 50 times higher velocity resolution than the space telescope. By clocking the speed of the gas, the VLT should be able to locate where the gas is within a disk.

"The two studies are very complementary," Pascucci said. "Once we know for a sample of stars where the gas emission is coming from (using the VLT), we then can extrapolate to other stars which Spitzer can see.

"Nobody thought about observing these types of lines from the ground before they were detected by Spitzer. At least, I wasn't thinking about detecting neon," she added.