The Center for Latin American Studies and the Center for Middle Eastern Studies in the UA's Collegel of Social and Behavioral Sciences have been awarded millions of dollars in grant funding over four years from the U.S. Department of Education.
Rebecca Ruiz-McGill
,
University Communications
Aug. 11, 2010
Resources for the Media 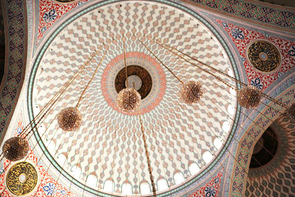 The Center for Latin American Studies and the Center for Middle Eastern Studies at the University of Arizona have been awarded millions of dollars in grants over four years from the U.S. Department of Education.

The two centers housed in the UA's College of Social and Behavioral Sciences earned National Resource Center designations – more commonly known as Title VI National Resource grants – by offering research and instruction in foreign languages and international studies, as well as providing outreach to secondary and elementary schools and to the wider community.

"I'm absolutely thrilled," said Anne Betteridge, director of the Center for Middle Eastern Studies. "The Title VI National Resource grants are the gold standard in international studies. For us and for Latin American studies, this is a hugely important form of national recognition."

As a Title VI center, the Latin American program will expand its role as a national leader drawing together scholars, artists and policymakers to examine critical issues of the Americas. At the same time, the center will enrich Latin American programming in the professional schools including journalism, public health, business, law and public administration.

The grant also will allow the School of Government and Public Policy to hire a professor in Latin American politics. "This is a most important part of the world for a Southwestern university, and with this grant, we can begin to rebuild our faculty in this area," said the school's director, Brint Milward.

The center historically has had an outstanding graduate program, which will be expanded with the grant while bolstering its critical role of providing undergraduate majors internships, study abroad opportunities and courses on the region.

"Latin America is in a critical period of political, economic and environmental change," said Scott Whiteford, the Center for Latin American Studies director, "but the eyes of the United States are on immigration and drugs, while many of the critical transformations are missed or misunderstood by the public and policy makers. The grant will help us address these issues, in addition to immigration and violence, while sharing our programs with the public."

The UA's CMES is one of only 19 Middle East centers nationally to receive the federal designation and funding in the new grant cycle, though since 1975, the program has been designated a National Resource Center, making it one of the longest-existing centers in Middle East studies in the country.

The funds support the center's mission to develop Middle East programs across campus, train students in Middle Eastern languages and provide outreach to K-12 schools and the community.

Betteridge said the funds also will allow the College of Social and Behavioral Sciences to move forward with two faculty hires, one in the area of language pedagogy and Arabic, and the other in the area of Middle East public health. The latter position will be shared with the Mel and Enid Zuckerman College of Public Health and will strengthen the dual master's program being developed between public health and Near Eastern studies.

The Foreign Language and Area Studies funds will allow CMES to award 11 academic-year awards to students during each of the four years, and to support intensive language study for at least five students each summer. Undergraduate and graduate students in any discipline at the UA who study Arabic, Hebrew, Persian or Turkish can receive the fellowship awards.