Climate records indicate the later part of the 20th century was the warmest period in the past 500 to 1,000 years, Lisa Graumlich told lawmakers May 6.
Daniel Stolte
,
University Communications
May 6, 2010
Resources for the Media 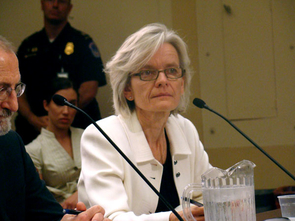 Lisa Graumlich, director of UA's School of Natural Resources and the Environment, testified before Congress May 6. 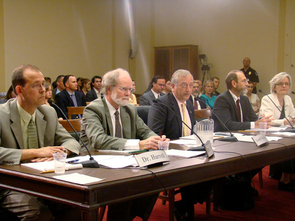 In addition to Lisa Graumlich, the panel of witnesses included: Chris Field, director of the department of Global Ecology at the Carnegie Institution of Washington; James McCarthy, oceanography professor at Harvard University and past president and chair of the American Association for the Advancement of Science; James Hurrell, of the National Center for Atmospheric Research; and Lord Christopher Monckton, chief policy adviser at the Science and Public Policy Institute.

The climate has changed throughout the Earth's history, but average Northern Hemisphere temperatures in the second half of the 20th century were likely warmer than in any other 50-year period in the past 1,000 years, a University of Arizona scientist told lawmakers Thursday.

Lisa Graumlich, director of the UA's School of Natural Resources and the Environment, testified May 6 before the U.S. Select Committee on Energy Independence and Global Warming. A video with selected parts of the testimony will be available on the committee's website.

Graumlich testified that the combination of climate records used in estimating Northern Hemisphere temperature trends – such as lake sediments, ice cores, coral growth bands and historical documents – obtained by independent research groups, has led to a clear indication that the later 20th century is the warmest period in the past 500 to 1,000 years.

"Given that we know that climate has changed throughout the Earth's history, it is critical to put the recent warming trend into the context of the natural variability of the Earth's climate system," Graumlich stated in a written copy of her testimony.

"The rise in temperatures since the 1970s, along with other evidence of warming (e.g. melting of snow and ice, sea level rise) support one of the key findings of that the ‘warming of the climate system is unequivocal.'"

Said Shay Stautz, UA associate vice president for federal relations: "Being part of this panel is an important opportunity for the UA and Dr. Graumlich to participate in advising members of Congress on a matter of critical national importance. It underscores our standing as one of the foremost players in the field of climate research."

Graumlich also was part of the "Oxburgh Inquiry," an investigative panel convened by the University of East Anglia and led by Lord Ron Oxburgh to review stolen e-mails from that school's Climactic Research Unit, which led to the "Climategate" controversy. Climate change skeptics used the e-mails to accuse the researchers of scientific misconduct and mishandling information requests.

The panel exonerated the scientists whose e-mails were stolen by hackers during this incident, saying they "saw no evidence of any deliberate scientific malpractice in any of the work."

As director of the UA's School of Natural Resources and the Environment, Graumlich integrates her career-long interest in global climate change with the emerging issue of how to best manage natural resources in an uncertain future. As a researcher, she investigates how ecosystems and human societies adapt to climate change, with a special focus on severe and persistent droughts.

Graumlich started her career at the UA as a faculty member in the Laboratory of Tree-Ring Research and was the first director of the UA's Institute for the Study of Planet Earth, or ISPE. While director of ISPE, she catalyzed the cross-campus interdisciplinary talent of UA researchers to define potential impacts of climate change on semi-arid regions.

In 1999, she moved to Montana State University to direct the Big Sky Institute, where she fostered partnerships among researchers and managers to develop science-based knowledge relevant to conservation of biodiversity in the Greater Yellowstone Ecosystem and other large protected areas.

In 2007, she was recruited to her present position as director of the School of Natural Resources and the Environment. She was given the mandate to broaden the school's engagement with the grand challenges in environmental sciences and resource management.

Under her leadership, the school has recruited new faculty members in emerging fields such as ecological informatics, ecosystem services, and ecohydrology and stabilized its resource base in a time of decreasing state support for higher education.