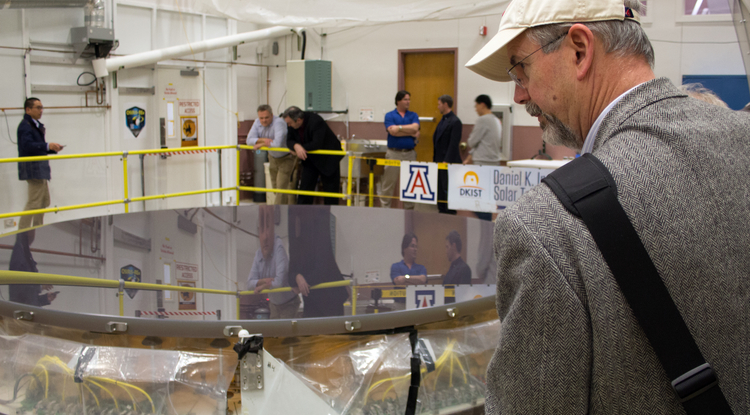 The completed primary mirror for the Daniel K. Inouye Solar Telescope awaits shipping at the College of Optical Sciences.

The Daniel K. Inouye Solar Telescope, or DKIST, is scheduled to see first light in 2019 on the island of Maui.
University Relations – Communications
Dec. 11, 2015
Resources for the Media
Extra Info:

Completion of the $14 million primary mirror for the 4.2-meter Daniel K. Inouye Solar Telescope, which is scheduled to see first light in 2019, was celebrated this week by the College of Optical Sciences at the University of Arizona.

The telescope is under construction by the National Solar Observatory atop the Haleakala volcano on the Pacific island of Maui. It is named after the late Daniel K. Inouye, who was a U.S. senator from Hawaii.

The telescope, also known as DKIST, features an off-axis, clear aperture design to allow for observations with unprecedented spatial, spectral and temporal resolution.

"We’re actually going to point this at the sun," said Thomas Rimmele, DKIST’s project director, who was on hand for the mirror’s completion. "This is an important telescope. It will be transformational for understanding the sun, solar activity and its impacts on humankind."

The DKIST primary mirror blank was fabricated by Schott AG of Germany then shipped to the UA for polishing. The UA’s polishing effort was four years in the in the planning and execution, involving more than 50 people from the College of Optical Sciences and Steward Observatory. The polishing alone required an estimated 80 hours a week for six months, utilizing four new measurement techniques.

"It was daunting to plan out the things we needed to do," said Jim Burge, a UA professor of optical sciences and astronomy and the project's principal investigator, citing the mirror’s complex shape and challenging specifications.

As an example of the research involved, Burge said, eight UA students worked on their thesis or dissertation related to different aspects of the project.

The mirror’s construction was "a research project all the way through," said Joseph McMullin, DKIST’s project manager.

The telescope’s site on Haleakala was selected for its clear daytime atmospheric seeing conditions, which will enable study of the solar corona. DKIST will be capable of observing objects on the sun that are about 25 kilometers (nearly 16 miles) across.

Construction at the DKIST site began in January 2013. Work on the telescope’s housing was completed in September of that year.

Justin Walker, associate dean of the College of Optical Sciences, praised the teamwork involved in the mirror project.

"The University of Arizona is known for this kind of work in optical fabrication, which is unmatched by any other university," Walker said. "We have this breadth of engineering staff that supports our faculty to do cutting-edge science with applied outcomes. It’s a unique capability."