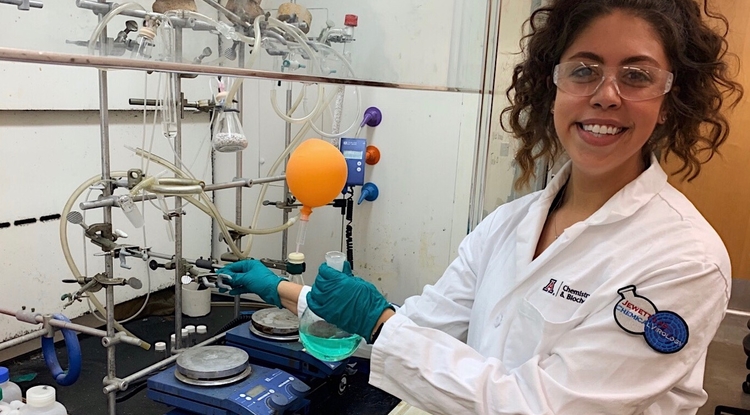 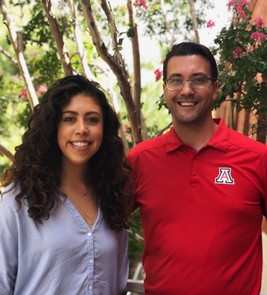 Natasha Cornejo, a second-year doctoral student in the Department of Chemistry and Biochemistry in the College of Science, and her thesis adviser, associate professor John Jewett, are among 44 student-adviser pairs to earn the designation in the institute’s latest round of awards. Along with a $50,000 annual award for up to three years for each adviser-student pair, advisers will participate in a year of mentor training focused on cultural awareness.

“Change can’t happen unless people at all levels are on board. I am excited that the HHMI recognizes how important a prolonged and intentional focus on mentoring can be,” Jewett says. “When Natasha graduates, she will carry her knowledge to new places, and I will be able to remain and continue to impact the University of Arizona.”

As part of their application, each fellow described how they plan to help contribute to a more inclusive scientific culture. Cornejo and Jewett plan to launch a seminar series where scientists from diverse backgrounds will share their research as well as their life experiences, both within and outside of the scientific community.

“I am so honored that Dr. Jewett and I have earned this fellowship and have the chance to be a part of the Gilliam community,” Cornejo says. “I am excited to learn and grow as leaders for diversity in science.”

The institute launched the Gilliam Fellowships in 2004 in honor of the late James H. Gilliam Jr., a charter HHMI trustee. Since then, the philanthropic organization has awarded 256 fellowships to biomedical or life sciences doctoral students, with a focus on those from racial, ethnic or other groups that are underrepresented in science. Students must aspire to careers in academic science and demonstrate a commitment to the advancement of diversity and inclusion in the sciences.

The fellowship will also allow Cornejo to focus the majority of her time on her research.

“Broadly, we use organic chemistry to make chemical compounds as tools, often called probes, to better understand biology,” Cornejo says. “My project involves imparting new levels of control on these probes so they can be turned to specific biological systems. For example, we can make a chemical probe that is unreactive until it enters a cancer cell, at which time the probe will respond to the specific biology of the cell, uncovering information that is unique to that cancer cell.”

Cornejo says she is making progress on her research goals and preparing for her first Gilliam conference at the end of September. Jewett’s training will consist of online training modules and two in-person workshops at HHMI headquarters.