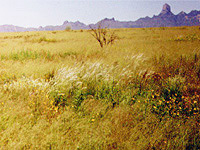 This view of the Buenos Aires National Wildlife Refuge shows a mix of native grasses and herbaceous dicots in the foreground, including Arizona cottontop and the golden-flowered Kallstroemia. The uniform grassland cover in the distance is Lehmann lovegrass, and includes an encroaching mesquite tree. Southern Arizona's Baboquivari peak rises in the background. (PHOTO: Erika Geiger)

Prescribed burns and livestock removal have done little during the past decade to control introduced South African lovegrasses and restore native grasses at the Buenos Aires National Wildlife Refuge southwest of Tucson, University of Arizona ecologists have found.

More, above-average rainfall in 1993 produced a significant increase in non-native lovegrass growing on sandy soil. The findings suggest that climate may outweigh management efforts to return many native grasses to the semi-desert landscape, said Erika Geiger. She is speaking on it today at the 85th annual Ecological Society of America meeting in Snowbird, Utah.

Geiger, a UA graduate student, collaborated with Guy R. McPherson in the research. McPherson, UA professor of renewable natural resources, is studying ecological relationships in savannas, grasslands and deserts of the southwestern United States.Grasslands in the southwestern United States and northern Mexico began to change appreciably centuries ago, when Coronado brought the first cattle into the region in the 1540s, McPherson noted. Livestock had a sizeable impact on plant and soil ecology by 1860. By the late 1880s, a huge population of livestock grazed the semi-desert grasslands.

Combined overgrazing and drought resulted in ecological disaster in the 1890s, dramatic disaster recorded in historical photographs that show severe erosion through barren ground, and, in some places, mounds of cattle bones piled high.

A concerned federal government intervened at the turn of the century. Pioneering researchers lacked modern technology and time to experiment with re-establishing native grasses after their initial attempts to restore these grasses failed. Their worldwide search for the best "miracle" grass to reduce soil erosion and provide livestock nutritive forage ended in the 1930s in South Africa, where they found Lehmann lovegrass. It established readily from seed, was easy to handle, and thrived on less than 10 inches annual rainfall. Lehmann lovegrass was widely seeded across southeastern Arizona from the 1940s through the 1970s.

By the 1970s, a new environmental awareness and wave of federal environmental legislation coincided with a realization that in the Sonoran borderlands, Lehmann lovegrass was displacing high quality native grassland, McPherson said.

The Buenos Aires National Wildlife Refuge was established in 1985 as habitat for masked bobwhite quail, an endangered species that had disappeared altogether on the Arizona side of U.S.-Mexico border. Biologists established a captive population of masked bobwhite quail on the refuge several years ago. They annually release several hundred quail into the refuge. But the question of whether the quail can sustain a population in the present habitat -- dominated by Lehmann and Boer lovegrasses --- is far from settled, McPherson said.

Refuge managers excluded livestock when they established refuge. They began a rigorous prescribed burn program in 1987, burning between 700 and 10,000 acres annually in an effort to reduce mesquite and the South African lovegrasses and restore native grasses.

Geiger and McPherson analyzed data collected as part of a long-term vegetation monitoring survey for the years 1987, 1989, 1993 and 1997. Their work has been funded by the U.S. Fish and Wildlife Service and supported by staff at the Buenos Aires National Wildlife Refuge, and collaborating biologists.

"We found that cessation of livestock grazing and prescribed burns did not alter richness, diversity or cover of plant communities in the 11 years following refuge establishment," Geiger said. "Time-since-fire and fire frequency had not affected communities by 1997.

"We did see some landscape-level changes that were a response to higher precipitation - an increase in Lehmann lovegrass on sandy, low-clay content soil."

Geiger and McPherson are working on similar research on the Fort Huachuca Military Reservation near Sierra Vista, Ariz.

"In our current studies with the Fort Huachuca project, we have sites that are dominated by the Lehmann lovegrass and sites that are dominated by the native grasses," Geiger said. "We see differences in the diversity of mammal, bird and reptile species. And having one dominant grass instead of a diversity of natives may be changing the hydrology, soil properties, nutrient cycling and fire regimes."

"In retrospect, it seems simplistic to think we can use a natural process like fire to restore habitat for species in light of this new player, the Lehmann lovegrass," McPherson added. "This grass wasn't around when recurring fires burned the native grassland inhabited by masked bobwhite quail. Restoring grassland - and other ecosystems as well - is a lot more complicated than that."