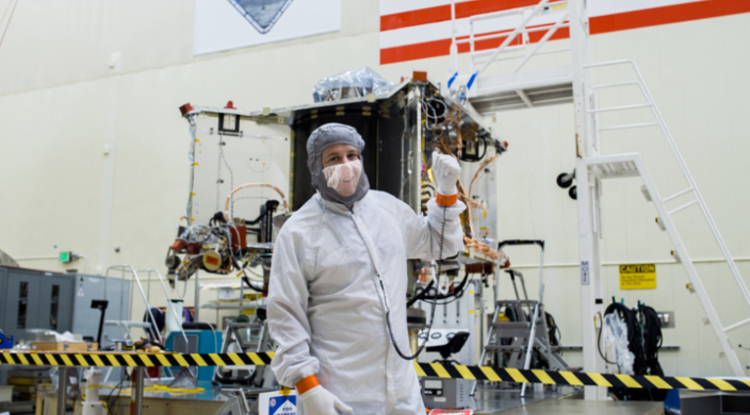 Systems engineer Bradley Williams with the OSIRIS-REx spacecraft in the Lockheed Martin cleanroom.

From modeling the asteroid to steering the spacecraft, UA engineering students are helping ensure all systems are go.
Jill Goetz
,
UA College of Engineering
Sept. 6, 2016
Resources for the Media
Extra Info:

Students in the UA College of Engineering are pursuing space-related research through many other programs at the University of Arizona, including the Space Object Behavioral Sciences initiative.

When NASA's OSIRIS-REx spacecraft lifts off aboard an Atlas V rocket from the John F. Kennedy Space Center in Cape Canaveral, Florida, dozens of UA College of Engineering students and alumni will be on hand to witness their handiwork. Others will be at ground control monitoring and steering the spacecraft.

UA master's student Bradley Williams, a systems engineer for the UA-built OSIRIS-REx Camera Suite, is looking forward to being among the select engineers giving the "All Systems Go" signal on Sept. 8. Williams is equally enthusiastic about what will happen post launch, when he turns his attention to uplinking commands to the cameras and evaluating the data coming down from them.

The UA-led OSIRIS-REx mission is the United States' first attempt to sample an asteroid and return it to Earth, and the first NASA deep-space mission involving a large cohort of engineering students from a public research university.

"OSIRIS-REx has given a young engineer like me a once-in-a-lifetime opportunity to have a hands-on role on a space mission," said Sara Balram Knutson, who earned her UA master's in engineering management in 2012 and is now a senior operations engineer for the OSIRIS-REx mission at the UA.

Knutson oversees day-to-day operations for the spacecraft's scientific instruments to ensure the spacecraft will be able to map the asteroid Bennu, select a sample site and obtain a sample.

So daunting is the task that the spacecraft will spend two years circumnavigating Bennu – 500 meters in diameter – before it extends its retractable arm, releases a burst of nitrogen gas to stir up enough soil to capture a sample, and retracts the arm with the sample securely in tow. OSIRIS-REx will have just three opportunities at only five seconds each to make the grab.

NASA chose the UA to lead OSIRIS-REx in 2011 and appointed Roberto Furfaro, director of the UA College of Engineering's Space Systems Engineering Laboratory, to lead the systems engineering team for the mission's Science Processing and Operations Center, which is responsible for the software that operates the spacecraft.

Furfaro immediately started training undergraduate students in the lab, helping many obtain prestigious NASA Space Grants, hiring them when they became graduate students to work on OSIRIS-REx, and supporting their transitions to UA employees working on the mission.

"The opportunity to work on a NASA-funded mission while obtaining a graduate degree seemed too good to be true," said Kristofer Drozd, a doctoral student studying systems engineering, who connected with Furfaro while finishing his UA bachelor's degree in aerospace engineering.

"I am part of a mission that will directly enhance our knowledge of the solar system – all while still being in school," he exclaimed.

Dante Lauretta, professor of planetary science and cosmochemistry at the UA Lunar and Planetary Laboratory and principal investigator of the OSIRIS-REx project, searched for more than 12 years before determining that Bennu was the most promising candidate for an asteroid sample-return mission.

Researchers have only been able to glean knowledge about asteroids by studying meteorites, pieces of space rock that have fallen to Earth, and by using massive telescopes like that at the Arecibo Observatory in Puerto Rico – one of several around the globe available to researchers at the UA – which have revealed and characterized many of the millions of asteroids in our solar system.

But meteorites become contaminated when they fall to Earth, which makes it hard for researchers to determine their original makeup or the asteroid they came from. And giant telescopes, powerful as they are, can only tell so much about asteroids' behavior and chemical makeup.

Best Still Yet to Come

To help compensate for the uncertainty, aerospace engineering master's student Tanner Campbell worked on software for an optical navigation system that produced the models of Bennu. Engineers will now use the system to navigate the unmanned spacecraft around the asteroid.

"Many of the most interesting aspects of this mission, like the mechanics of operating a spacecraft in close proximity to a small body, don't start until we get to Bennu two years from now," Campbell said.

John Kidd, who received a NASA Space Grant and earned his Bachelor of Science degree in aerospace engineering and a master's in systems engineering from the UA, agrees that the best is yet to come.

"Only when we approach Bennu can we begin a full characterization of the asteroid before we move in to collect the sample," Kidd said. "A large part of my job will be creating new plans and contingency plans as Bennu reveals its secrets to us."

Many working on OSIRIS-REx will continue on the mission through 2023, when the SUV-sized spacecraft re-enters Earth's atmosphere and releases a heat-shielded capsule containing its precious cargo – at least 2 ounces of pristine 4.5-billion-year-old carbon-rich regolith, or loose surface soil, snatched from Bennu – that will touch down by parachute at the Utah Test and Training Range.

Daniel Wibben, one of fewer than a dozen systems engineers steering the unmanned spacecraft, will be at mission ground control in Denver when the spacecraft takes off, and will continue piloting it for the next seven years with the Arizona-based deep-space navigation company KinetX Aerospace.

"For the launch, we will be sitting at computers at Lockheed Martin, waiting for the first signals coming back from the aircraft to figure out what trajectory it is on. We have charted a course for the spacecraft, but we don't know exactly what trajectory it will take," Wibben said, adding that "we do have automatic systems in place to help prevent problems in real time, even if we can't see them."

There is no GPS navigation in deep-space systems, and data will be delayed by 20 minutes as it travels from Bennu to Earth.

"Once we get to Bennu, we're going to be ready, agile and on our toes for whatever Bennu throws at us," said Wibben, who earned four UA degrees – bachelor's degrees in aerospace and mechanical engineering and master's and doctoral degrees in systems engineering.

Discoveries from the spinning-top space rock could shed light on the origins of the solar system and life within it and reveal possible sources of natural resources. It will also indicate potential perils from asteroid collisions and influence development of technologies to prevent them.