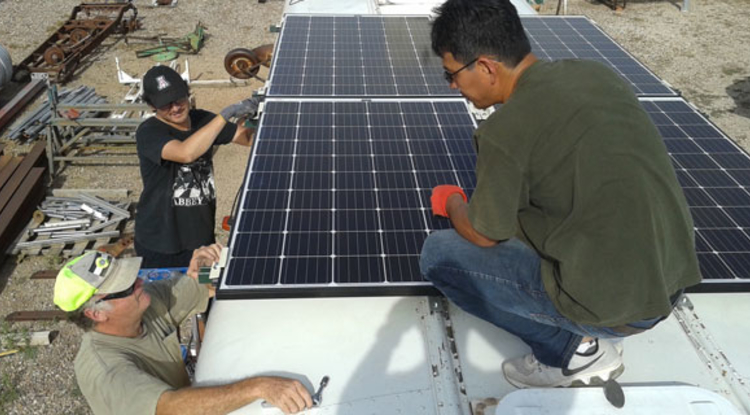 Members of the UA-AATech team mount the solar panels on the roof of the school bus. From left: Bob Seaman, technical lead for desalination unit assembly; environmental engineering master's student Chris Yazzie; and AATech president Peter Zhou. Yazzie was raised on the reservation and is writing his master's thesis on the separation of uranium from water.

With a solar-powered water-purification system and lab on wheels, UA researchers extend infrastructure to a community and supply educational opportunities for students.
Emily Dieckman
,
UA College of Engineering
Sept. 15, 2017
Resources for the Media 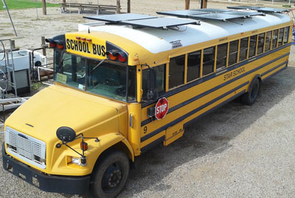 Once a team at the STAR School has become familiar with running the solar-powered desalination bus, they will take it on the road to demonstrate its water-treatment capabilities to the Navajo Nation.

University of Arizona engineers, partnering with the consulting firm Apex Applied Technology, recently delivered a mobile water treatment system to an off-the-grid school in a water-scarce Navajo community. The system is built into a refurbished operational school bus, which also houses a laboratory, adding an educational component.

"It's a way to extend infrastructure to these communities," said Bob Arnold, a UA professor of chemical and environmental engineering and an expert in water purification and wastewater treatment systems.

The desert portion of the Navajo Nation in northeastern Arizona receives only 7 to 11 inches of rain per year. There is, however, plenty of groundwater — it's just high in salinity and contaminated with metals, including uranium, in some areas.

"It can provide water for the Navajo Nation for many, many decades if we treat it," said Vicky Karanikola, a UA professor in chemical and environmental engineering.

Out of the Lab and Into the World

The multicultural research team, including a number of graduate students, developed the solar water purification system for STAR School, a preschool through eighth-grade public charter school operating completely off-grid in the Navajo Nation near Flagstaff, Arizona. On Sept. 7, the group delivered the bus and demonstrated the system to the school and its community.

"Here in the U.S., people don't realize there are people who have basic needs to be addressed," said Ilse Rojas, Apex Applied Technology's project manager for the bus. "If we can help them make their lives better, I think that's amazing."

This is the third water purification system to come out of the partnership between the University — including staff, students and alumni from the Department of Chemical and Environmental Engineering — and Apex Applied Technology, or AATech, which advocates for federal funding for underserved populations.

It is the first, however, to be built into a bus.

"Our mission is to take the research and apply it to technology to solve real world problems,” said Jing Luo, AATech vice president, who earned a PhD in environmental engineering at the UA in 2003.

The system is straightforward. Water is drawn up from wells into a feed tank on the bus. Then it passes through three filters with progressively lower micron ratings — 10, 5 and 1.

A micron is equal to one-millionth of a meter. A grain of ordinary table salt is about 100 microns, and the human eye can see down to about 35 microns without the aid of magnification. The lower the micron rating on a filter, the smaller the particles it can remove from the water.

Next, the water is forced through a series of semi-permeable membranes.

"With the pressure that we apply, we basically squeeze clean water through the membrane," Karanikola said.

About 20 percent of the water pulled in from the well will be filtered into drinkable water, and the rest will be returned to the source. Maintaining low recovery levels allows the filtering system to last longer, keeping operations sustainable.

"We've pretty well simplified the process so that people can produce water, and they can do it in a highly reproducible, robust way," Arnold said.

Easy for Community to Operate

Members of the community and students at the STAR School will learn to operate the low-maintenance system.

"We want students to be really motivated to want to learn more, and hopefully to go into hard sciences and help their people that way," said STAR School co-founder Mark Sorenson.

The team also hopes that training community members to use the system will help mitigate problems such as unemployment, which hovers between 40 and 45 percent in the Navajo Nation.

"I think that the chance to have hands-on experience will lead to big opportunities in the future," said Bob Seaman, a UA research specialist who designed the setup for the bus filtration system.

The bus idea initially came to Sorenson a few years ago as the Standing Rock Sioux began pushing back against Dakota Access Pipeline developers to protect the tribe's drinking water and ancestral lands.

"The mobile filtration unit can help people get water that they can drink," Sorenson said.

With nearly 40 percent of families on the Navajo Reservation living without running water, and much of the available water either unsafe or unpalatable, he then shifted his thinking closer to home, to providing drinkable water for STAR School's own community.

"If you get together a great group of scientists, and a great group of people who are motivated, and think creatively, you can solve some pretty serious problems at the local level," Sorenson said.

The UA College of Engineering research team couldn't agree more. The team met every Saturday for the last two years to make the bus a reality.

"It's really fun to see science changing people's quality of life," said Ph.D. candidate Rodolfo Peon, who designed the electrical system for the bus and outfitted it with solar panels.