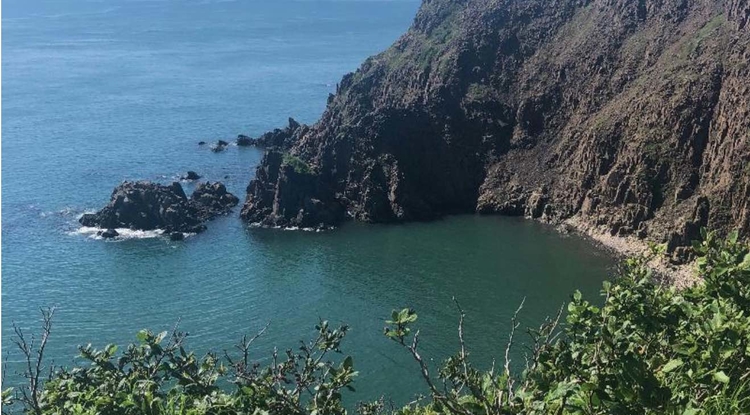 Kim Bussing's post on Grand Manan Island focused on the role of women in its past and current culture, writing, "This is an island built by women." (Photo: Kim Bussing)

Six UA creative writing graduate students traveled this summer — three to Grand Manan Island and three to the borderlands region — to find inspiration for their writing on urgent environmental and social justice issues.
Lori Harwood
,
College of Social and Behavioral Sciences
Aug. 26, 2019
Resources for the Media 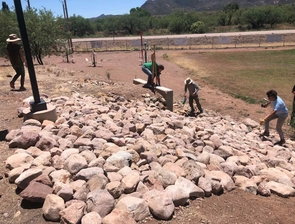 Katerina Ivanov's blog post included a description of the strenuous process of making rock piles in Patagonia to prevent soil from being swept away. (Photo: Katerina Ivanov)

This summer, three University of Arizona students traveled to Grand Manan Island in the Canadian Maritimes and three to southern Arizona as part of the Department of English's Field Studies in Writing Program.

The students, who are all in the Master of Fine Arts Creative Writing Program, blogged about their experiences during two-week program, which is funded by the Agnese Nelms Haury Program in Environment and Social Justice.

“Ours is the first MFA program to bring creative writing graduate students into site-specific engagement with issues of urgent environmental and social justice concern for the region and nation,” said Susan Briante, professor of English and coordinator of the Southwest Field Studies Program.

“Field Studies has brought a spirit of engagement into the artistic practice of our students,” said Alison Hawthorne Deming, Regents’ Professor of English and coordinator of the Grand Manan Field Studies Program. “We are currently seeking funds to continue the Southwest project, and we remain deeply grateful to the Haury program for enabling us to launch what has been a very gratifying innovation for creative writing at the UA.”

For five summers, three students have traveled to Grand Manan Island, Deming's childhood home. With a population of 2,500 year-round residents, Grand Manan has a 200-year history of traditional fisheries and is now undergoing profound changes due to decline of fish – and recently a dramatic increase in lobsters — in the North Atlantic.

Students in the Field Studies in Writing program created place-based literature that explored how the arts contribute to an understanding of environment and climate change. Students also mentored island youth to help them tell their stories of coming of age in a place where sustainability of the local culture is deeply tied to the sustainability of marine life.

This year, Kim Bussing, Emilio Carrero and Kevin Mosby made the trip to Grand Manan.

“We were able to interview a wide range of Grand Mananers, from students to those who have called the island home for many years, learning about their varied experiences, their perspectives on island life and current difficulties, and their view of the island's future,” Bussing said.

In his essay, Mosby wrote of the drug problem on the island. “Gradually, I discovered that nearly everyone on the island had been directly or indirectly affected by a longstanding drug problem, centered largely but not exclusively among the young lobster fishermen of the island who, in the midst of a now decade-long lobster boom, simply don’t know what to do with all the money.”

Carrero, whose research and writing focused on monuments and memorial sites, said both the cultural immersion and group collaboration helped him grow as a writer and researcher.

“Especially for creative work, the actual in-person experiencing of a place is invaluable,” Carrero said. “It creates a meeting place between individuals and cultures – a cauldron in which both can be alchemized into art.”

In 2017, the UA Creative Writing Program launched Field Studies Southwest, which is co-coordinated by Briante and alumnus Francisco Cantú. Each summer since, students have spent two weeks in Southern Arizona, exploring how literary and documentary arts can create humane responses to environmental, social justice and border issues.

This year, Katerina Ivanov, Logan Phillips and Miranda Trimmier made the trip. The team studied mining and ranching histories and met with groups addressing the aftermath of overgrazing, erosion and disappearing groundwater. They also met with advocacy groups and visited the border wall.

In collaboration with Borderlands Restoration Network, the students offered storytelling workshops for marginalized youth and worked with high school students in hands-on restoration work of the local ecosystem.

“As a writer I often think about the failings of popular border representations, those tropes that seem to short-circuit the sort of engagement that might make real change,” Trimmier wrote. “The ones that 'humanize' humans, or flatten complex violence into simple spectacle, or can’t quite grasp the structural conditions at hand.”

In her essay, Ivanov wrote, “The Americans here tend to speak the word refugee, the word migrant, while thick-tongued with pity, and for some reason, it digs at me. These words themselves can act as an erasure – when will we stop losing complexity? Losing the individuality of so many lives, a specificity that gets swept aside like loose sediment when the border is viewed only as a crisis. When a person is viewed only as a migrant– only as a cause, a threat, a tragedy.”

Phillips said one of his most memorable events was serving food at a migrant aid center in Nogales, Sonora, Mexico.

“The last time I was there, the cafeteria was filled with almost 100% single men. Now, there are so many families and children that the leaders of the shelter led the room in a round of kids’ songs before serving food,” Phillips said. “The desperation and resilience are both astounding.”

Philips added that the program gave him the opportunity to make connections between his love of the region and his academic research.

“Since childhood, I’ve found deep purpose and inspiration with being outdoors among the plants, animals and people of the borderlands region,” Phillips said. “This program helped me reconnect to that primary driver of my work.”

A version of this article originally appeared on the College of Social and Behavioral Sciences website: https://sbs.arizona.edu/news/ua-field-studies-program-inspires-writing-about-environmental-and-border-issues