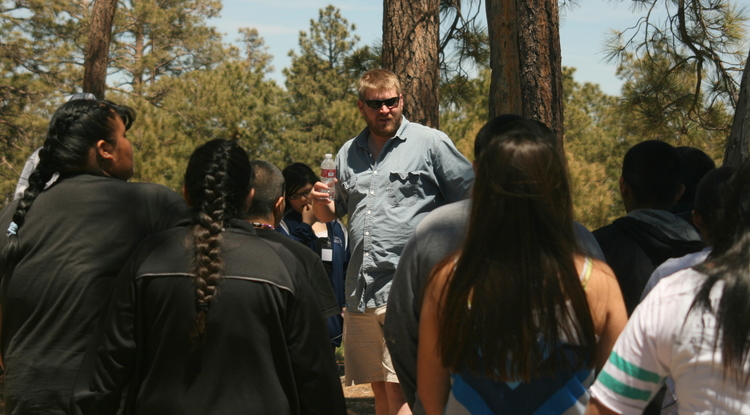 For the Walatowa High Charter School students, benefits of the recent UA excursion were manifold: Students were introduced to Arizona state universities, informed about UA fire ecology research around their home communities and learned about fire ecology from a scientific and cultural perspective in ways meant to inform their future studies and professional careers.

A new movement is under way to shift the way in which the UA engages its community partners in outreach initiatives funded by research grants. Where academics of the past sometimes limited their outreach projects, the move today is toward tailored, multi-year culturally responsive initiatives that serve a range of people throughout Arizona and beyond.
La Monica Everett-Haynes
,
University Communications
May 14, 2013
Resources for the Media
Extra Info: 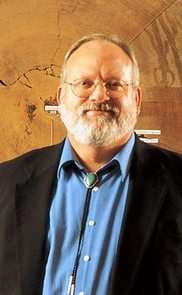 Thomas W. Swetnam, who directs the UA Laboratory of Tree-Ring Research and is from Jemez Springs, shared years of Jemez Pubelo-area research with the Walatowa High Charter School students. 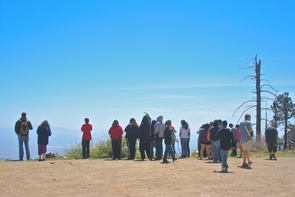 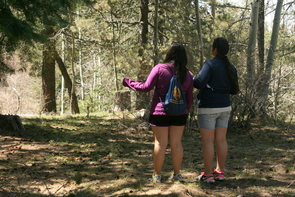 In addition to visiting Mount Lemmon during their recent trip, the Walatowa High Charter School students also met with Native American Student Affairs staff and students and also engaged in a cultural exchange at the San Xavier del Bac Mission. "It's better to be able to see people in person rather than online," said Keilani Gachupin, one of the high school students.

Recently atop the Santa Catalina Mountains, overlooking a remnant burn area of the 2003 Aspen Fire, University of Arizona researchers spoke with dozens of New Mexico high school students about the history of natural and human-caused fires in the southwestern region.

Under UA grant-funded partnerships, the students also learned about the historic pattern of wildland fires, not only in Arizona, but in forests near their homes in Jemez Pueblo, where UA scientists have been conducting research for decades.

Through the Jemez FHiRE (Fires & Humans in Resilient Ecosytems) Project and the Monsoon Project, students, educators, staff and researchers in Arizona and New Mexico are involved in the outreach component, which serves as a strong example of contemporary University-supported, grant-funded outreach.

"It is really important to create these experiences," said Sara Chavarria, the education outreach director for the UA College of Education.

"The Jemez people are really interested in learning about changes in nature because this is their historic land," Chavarria said. "And it gives us the opportunity to present our science, research and other projects."

Where academics of the past more often offered limited outreach initiatives, the move today is toward tailored, sustained multi-year, culturally responsive outreach initiatives that do not merely serve the benefit of the institution, but the range of partners.

Tolbert noted the recently launched STEM Learning Center, a joint project of the UA colleges of education and science, is offering a promising model for future University-led outreach. The center exists to better coordinate UA STEM initiatives and community-based outreach.

"What they are recognizing is that a large, long-term project will help to fund the great things that must be done; that outreach will be more impactful than the piecemeal projects we might otherwise do," Tolbert said, noting that numerous other examples exist throughout the UA.

"You don't have time to develop effective two-way partnerships unless you have this kind of broader initiative," Tolbert said. "There are resources and prospects you can tap into that will have a greater impact than if you just create something yourself. It's so smart."

Organized in partnership among the UA College of Education and Laboratory of Tree-Ring Research, the Jemez Valley Public School District and the students' respective tribal educators and leaders, the Jemez FHiRE Project is one of two major National Science Foundation grants the UA received for tree-ring research.

"This is extremely important for us – to have these young students here to see what the University has to offer," Marilynn Sando, who chairs the UA president's Native American Advisory Council, said upon meeting the New Mexico group during their recent visit.

Swetnam, one of the leading tree-ring scientists in the world, grew up in Jemez Springs, a village about 10 miles from Jemez Pueblo. He and his collaborators have spent decades investigating fire ecology in the nearby Jemez Mountains.

"Jemez is a place that is very close to my heart," Swetnam, a professor and director of the premier center for research and education dendrochronology, said while presenting to the group.

"There is a lot of interest and need to understand better what is happening in our forests so that we can reduce the risks of climate change. Tree rings can give us hundreds of years of history," he told the group, noting that such expanded knowledge is a core incentive of the grant-funded Jemez FHiRE Project's research component.

In particular, Swetnam and his team are studying how the Jemez people have historically lived in a region that has experienced bouts of fire activity, and how such populations conceived of the human-land-fire relationship.

One possibility is that given the farming culture of the Jemez people, the landscape was well-groomed to avoid major fires.

But given contemporary fire policies and practices, much has changed.

What seems more normative than has been historically evident are large, very intense fires, some of which have occurred since the students were born. When Swetnam asked if they could recall some of those fires – such as the Dome Fire of 1996, the Cerro Grande Fire of 2000 and the Osha and Las Conchas fires of 2011 – many nodded their heads.

"When I was growing up, we started to see some of these types of fires," Swetnam told them.

"We need to learn how the Jemez people lived in a ponderosa pine forest for so many hundreds of years, and yet they were successful," he said. "How can we learn without losing more of the forest?"

Later in the day, the group observed burn areas and learned more about dendrochronology.

Entering a swath of dense forest at one of the highest points of the Santa Catalina Mountains, the group of students huddled around Josh Farella. Farella, a UA graduate student of geography and Tree-Ring Laboratory researcher, provided a coring demonstration and, as he pulled the first core, the group's enthusiasm became evident.

Chatter began immediately. Some took camera phone photos while others stepped forward, asking if they could take a sample. Soon, the group of students was split into smaller teams who were responsible for taking their own samples, then sanding and analyzing them.

It was a thrilling tactile experience – to see, touch and smell the center of a tree still standing.

"Many of our students are involved with their land; they are farmers," said Fancine Garcia, Walatowa High Charter School's Gear Up coordinator.

"The land is not just a forest to them. They are hunters; they get their food from the land, so they are very interested and invested," Garcia said. "We don't have someone we can sit with who can tell us stories about what happened and to tell us the history, so we need to figure it out."

Though Keilani Gachupin does not envision that she will work in land management, she did find a value in the project. With plans to one day work in the medical field, Gachupin can see the link between her chosen field and studying what ways environmental conditions contribute to certain illnesses and conditions.

Dorell Toya-Upshaw, who accompanied her daughters on the trip, said learning about the UA research was especially meaningful.

"I was glad that Jemez was funded to learn more about the research that is happening at Jemez," Toya-Upshaw said. "The researchers have been studying how Jemez has changed for more than 80 years now. We need that information."

She also said it is hugely important that American Indian youth are recruited by higher education institutions and are encouraged to determine ways to support their home communities.

For example, Kiyani Upshaw is interested in working in the legal field, likely specializing in Indian law, so that she may "help people to solve their problems. It's all about helping people," the high school student said.

Toya-Upshaw said that while the UA visit was not focused directly on the legal field, the implications for her daughter were obvious.

"It is important to know what is happening in our environment to make sure, through laws, that it is afe for us to live and prevent different conditions," Toya-Upshaw said. "We can also make sure our children are safe for the future."

The Benefit of Sustained Outreach Connections

Tolbert noted that the move toward more comprehensive, partner-based outreach also is much more sustainable and makes better sense.

"Now, instead of creating one-off activities, we are able to establish long-term ties with school systems, school districts and classrooms," she said.

For the Jemez FHiRE Project, it is the second year of the partnership, which engages UA students, faculty and staff and also New Mexico tribal nations – their students, educators, community members and employees.

"I really want to build relationships," Chavarria said of her work coordinating the outreach component between the colleges of education and science and the New Mexico partners.

"I think that with these relationships we will be able to do this work well after the grants," Chavarria also said.

Indicators of the program's sustainability have begun to materialize.

The New Mexico tribal educators – who also have visited Tucson for workshops – have been involved in curriculum develop, learning ways to involve science, technology, engineering and mathematics (STEM) instruction into their classrooms, no matter what the topic.

But what prefaced the partnership with the UA under the two federal grants was a science awareness initiative through farming at Walatowa High Charter School.

"But it began to take on a life of its own," said Francis Vigil, who develops the high school's science curricula.

"We started to do more interdisciplinary, cross cultural work and, with this huge undertaking, we are taking into account tribal traditions and incorporating into the science program a more culturally based curriculum that allows students to be more involved, but also to have more buy-in in what we're teaching."

Now, in addition to the trip to the UA, several University and high school students will be offered summer internships, working with UA researchers and also forest service and U.S. Geological Survey specialists. Also, the Walatowa educators are adjusting their curricula to better meet and exceed state requirements while also incorporating teachings on fire ecology not only into science courses, but also in those covering mathematics, art, history and English.

"Some of the English teachers are doing a whole unit on genetically modified corn; mathematics is looking at crop growth rates," Vigil noted.

Vigil also said it has been infinitely valuable to collaborate with the partners, including the UA and its students, faculty and staff.

"The University of Arizona has allowed us to take a look at what hard science is being done in and around the Jemez Pueblo, which has everything to do with the Jemez Pueblo historically, and our future," Vigil said.

"It really does affect the future of these students, so it has been easy to get their buy in because they feel strongly about being stewards of their land," he also said. "The opportunities the UA has been able to provide for us is another reason why we are going to be able to raise the capacity within the community; advancing what the students are able to achieve outside of and within the pueblo."

Vigil also said expansive knowledge about ecology and land management "affects our culture, home, environment, where we come from."

He emphasizes to his students that "if we don't take care of the land, we will lose it."