The center is noted as one of the best programs in the country for political philosphy.
Jeff Harrison
,
University Communications
Feb. 24, 2012
Resources for the Media 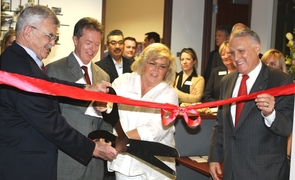 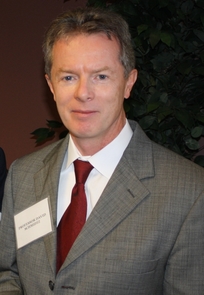 The Center for the Philosophy of Freedom at the University of Arizona officially opened its doors at the Marshall Building with a ribbon cutting on Feb. 24.

The center's new quarters were crammed with dozens of political and business leaders, including U.S. Sen. Jon Kyl, Congressman Jeff Flake, Karl Eller and others, along with UA President Eugene G. Sander, Provost Jacqueline Mok and other faculty members.

Based in the UA philosophy department, the center will house scholars who will pursue the philosophical underpinnings of freedom. David Schmidtz, the center's director and the Kendrick Professor of Philosophy, secured funding from several donors for four professorships and operating funds for the next five years.

Already it is one of the elite programs in political philosophy. The Philosophical Gourmet Report currently ranks the UA's Freedom Center No. 1 in the world.

"This is a research center interested in the philosophical and conceptual features that include liberty and freedom, and how they interact with other complex values that define ourselves in society," said Christopher Maloney, head of the UA philosophy department. "Ethics has a fundamentally important role in society, and is critical in establishing public policy as well as individual behavior."

"It's an example of how academics, given a good idea, can move at flank speed," said Sander, who was provost when Schmidtz and Maloney approached Sander with the proposal for the center.

"It's an excellent idea and one that I felt we could easily move forward on," he said.

The center has been a long-time dream for Schmidtz, who graduated from the UA in 1988 and taught at several schools before joining the UA faculty in 1995. A life-threatening illness nearly a decade ago almost derailed it.

"The story starts earlier with Randy Kendrick in 2003," he said. "I was getting an award from the Institute of Humane Studies (at George Mason University) as their alumnus of the year. They had given me a fellowship as a grad student."

"I sat at the head table with Randy and her husband, Ken, an owner of the Arizona Diamondbacks, although I didn't know any of this at the time. Randy called me about a week later and invited me to dinner, and I said ‘no.'"

That's because just two days earlier, Schmidtz had been diagnosed with a tumor lodged at the base of his brain. His doctors said they had an 85 percent chance to save his life, but he might not be able to walk, talk or see again. He told Randy Kendrick that he was getting his affairs in order and didn't feel like being social.

"She could have told me to go to hell, but instead Randy asked about the exact name of the tumor, its location and the name of my doctor. She called back a couple of days later to set up a consultation with Dr. Robert Spetzler, a neurosurgeon at Barrow Neurological Institute in Phoenix. Surgeons from eight countries came to watch," Schmidtz said.

The Thursday morning surgery went well enough, he said, that he watched the UA Wildcats win their NCAA tournament game that evening. The next day he went for a walk. On Sunday, he went home and was back in his office on Monday.

"Later, a couple of neurologists looked at the real-time MIRs and the path of the surgery. At one point they stopped and asked ‘Who did this? Was it by chance Robert Spetzler?' I said yes, and how did you know?"

"They looked at the monitor and then at me and said ‘Because you're still here.'"

Schmidtz, an authority on environmental ethics and political philosophy, renewed his focus on creating the Freedom Center. "I was teaching a course on the philosophy of freedom and wanted to expand it to a two-course sequence. I wanted to create a workshop to showcase research by our alumni who have gone on to other jobs and colleges, and create graduate fellowships."

Again, Randy Kendrick became a force in generating financial support among donors such as Charles Koch, Karl Eller and Jerry Fullinwider to create the center.

"They like what they saw, joined forces with Randy and things started to snowball," Schmidtz said.

Marty Zupan, president of the Institute for Humane Studies at George Mason University, said one significant measure of Schmidtz's success is that a number of his students have gone on to earn doctoral degrees, and that their students are in the process of earning their doctorates as well.

Schmidtz said some of the practical benefits of the center could include training teachers to handle Arizona's recent initiative to teach economics in the state's K-12 schools, or simply "helping UA students become better journalists, policy makers, lawyers and teachers who are trained in the social sciences in an interdisciplinary and practical way."

During the ceremony, Schmidtz frequently credited Randy Kendrick for the success of the freedom center.

"The important thing is that this center didn't start with a donation, or with fund-raising or a pitch, or an angle, or an ideology or even an initiative," Schmidtz said. "It started with Randy Kendrick charging into a burning building and doing whatever it took to save a man's life. My life."

To schedule an interview with David Schmidtz, the Center for the Philosophy of Freedom director, contact Gayle Siegel at 520-626-7680 or gayles@email.arizona.edu.