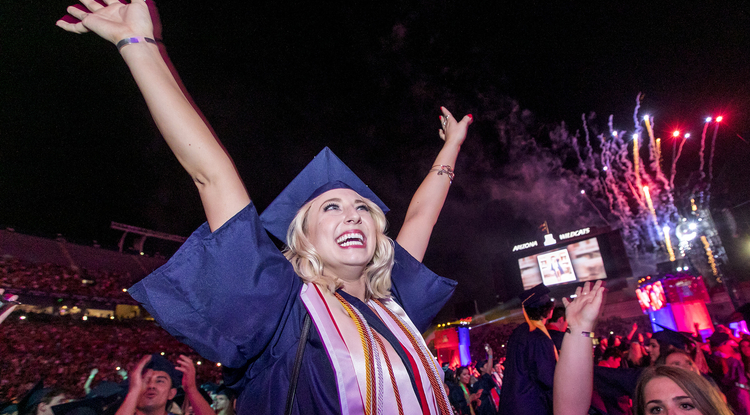 UA Grads Urged to 'Do Something Special'

Commencement keynote speaker Ray Mabus tells the Class of 2018 to pay it forward, using his tree-farmer father as an example of how it's done. The festivities at Arizona Stadium drew about 4,500 graduates and 40,000 guests.
University Communications
May 12, 2018
Resources for the Media 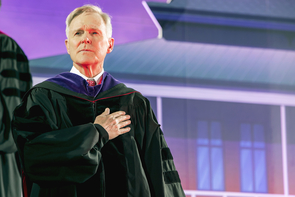 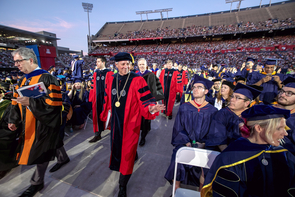 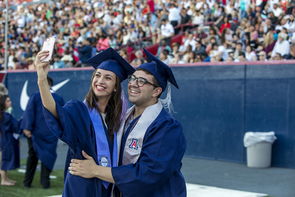 Ray Mabus, who holds the distinction of having thrown out the first pitch in all 30 Major League Baseball stadiums, made a different kind of pitch to the University of Arizona's Class of 2018: Do something special that's not about you.

Mabus, 69, who rose from small-town Mississippi roots to become that state's governor and serve as secretary of the Navy in the Obama administration, delivered the keynote address to about 4,500 graduates and 40,000 guests at the UA's 154th Commencement on Friday night in Arizona Stadium. His remarks drew heavily from his military background, which included two years in the Navy before Harvard Law School.

Mabus said that although those who serve in the country's military are heroes to him, "quiet acts of heroism" are practiced daily by the likes of teachers, nurses and neighbors — all well-represented in the audience before him.

As an example, he mentioned his late father, a tree farmer who planted thousands of trees in the last year of his life — but didn't cut down a single one.

Earlier Friday, Mabus provided some detail on how he came to be pitcher for a day in stadiums across the U.S. and Canada. A baseball fan, he began the tour to bring attention to the Navy and the Marine Corps, and the first occasion arose when he was in St. Louis for the dedication of the USS St. Louis. It continued when he dedicated a ship or submarine and when there were pregame swearing-in ceremonies for service members.

He said he was up to 17 stadiums by 2014 when someone asked if he wanted to try for all 30. He said yes, and now he has done it. The two toughest to cross off? New York's Yankee Stadium, where the ceremonial first pitch is thrown out only three times a year, and Toronto's Rogers Centre, because Mabus isn't Canadian (he partnered with Canada's chief naval officer to notch that one).

Robbins "has found a home and a calling at this incredible institution," Mabus said of the UA.

This was Robbins' first Commencement as president, and he quipped in his opening remarks that he hoped it wouldn't be his last. However, the 90-minute program focused exclusively on the University's students, faculty, staff and alumni. Especially noteworthy was recognition of Melissa Vito, an alumna who is leaving the UA after a lengthy administrative career and was responsible for efforts to increase access, retention and diversity among the student body.

Robbins singled out the 100% Engagement initiative in his praise of Vito, saying it "has set UA graduates apart from their peers." Through 100% Engagement, students can earn a special notation on their transcript indicating that they have performed real-world-ready work during their time at the UA.

Vito "has done incredible things for her fellow Wildcats," Robbins said. "All of us owe her a debt of gratitude."