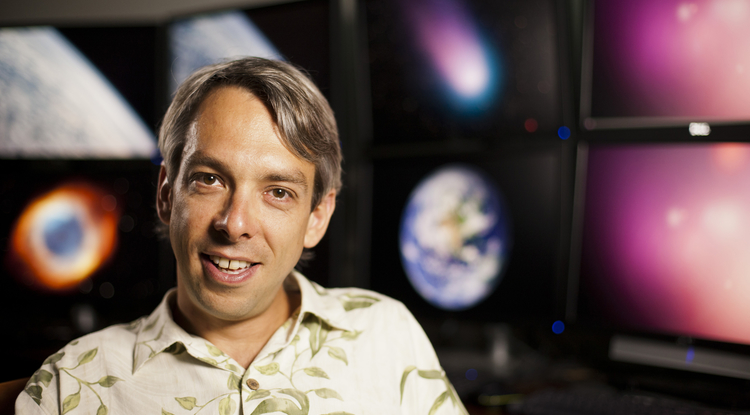 Olivier Guyon has been fascinated with the stars and planets since childhood. (Photo: MacArthur Foundation)

UA assistant professor Olivier Guyon has made it his mission to enable amateur astronomers and school children to discover alien planets far outside our solar system. For his breakthroughs in telescope optics and his vision of bringing cutting-edge science to the public, he was awarded the $500,000 MacArthur Fellowship.
Daniel Stolte
,
University Communications
Oct. 2, 2012
Resources for the Media
Extra Info:

About the MacArthur Fellows Program:

The MacArthur Fellows Program awards unrestricted fellowships to talented individuals who have shown extraordinary originality and dedication in their creative pursuits and a marked capacity for self-direction. It is intended to encourage people of outstanding talent to pursue their own creative, intellectual and professional inclinations.
Fellowships are awarded directly to individuals rather than through institutions. Recipients may be writers, scientists, artists, social scientists, humanists, teachers, entrepreneurs, or those in other fields, with or without institutional affiliations. Awardees cannot apply, but have to be nominated by nominators in their field.
The foundation emphasizes that the fellowship is not a reward for past accomplishment, but rather an investment in a person's originality, insight and potential, meant to encourage them to exercise their own creative instincts for the benefit of human society. 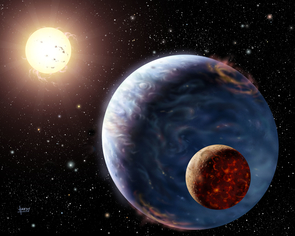 Artist's impression of an exoplanet far away from our solar system, bathed in the light of its parent star and circled by a young moon. (Image: NASA) 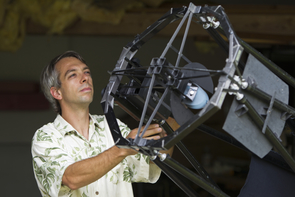 Olivier Guyon identified the theoretical limit on the performance of planet-hunting telescopes. Based on this analysis and computational models, he compared the expected performance of several methods to identify their relative strengths and shortcomings. (Photo: MacArthur Foundation)

University of Arizona astronomer and optical scientist Olivier Guyon has been named a 2012 MacArthur Fellow for his contributions and creative potential toward the study of planets outside the solar system and for his vision of involving the public in their discovery.

“When I was 10 years old, someone in my family gave me a book about astronomy, and I started looking at the sky and reading about it,” Guyon said in a recorded video statement. “Then I got a bigger telescope, and it never stopped.”

Guyon, who obtained his doctorate in physics at the Université Paris VI in France in 2002, has been an assistant professor of astronomy and optical sciences at the UA since 2008. He has a joint appointment in the College of Science’s department of astronomy and the College of Optical Sciences.
The young researcher develops optics for astronomy, specifically techniques to take images of exoplanets, planets outside our solar system.
“Every star you see at night has planets, and they’re called exoplanets,” Guyon said. “They’re extremely important because if there is life elsewhere in the universe, it is probably on a planet that is similar to the Earth around another star.”
He said scientists are looking at exoplanets in the hope of finding life outside the solar system. However, unlike stars, which are bright and relatively easy to observe, exoplanets hide in the overwhelming glare of their parent stars, making them invisible to conventional telescopes.
“If you try to point a normal telescope at star and try to take an image of the planet next to the star, it won’t work because the glare of the star is going to prevent us from actually seeing the planet, which is much, much fainter than the star,” Guyon explained. “Once we have identified such planets, PIAA (Phase-Induced Amplitude Apodization) allows us to study them. We can look at their colors. Do they have oceans? Atmosphere? Land? Clouds?”
Guyon develops optical techniques that massage the light of the telescope in a way that eliminates the glare and makes the planet emerge from the darkness.
One such technique is Phase-Induced Amplitude Apodization, or PIAA. In the process, he has figured out ways to get away with mirrors half the size of what scientists deemed necessary to accomplish this feat, making the search for alien worlds cheaper, less equipment-intensive and therefore more accessible. In doing so, Guyon hopes to involve the public and amateur astronomers in the search and discovery of exoplanets.
“In the last two years, I have been working on how to make this technique affordable and easy to use for amateur astronomers, schools and the general public to actually implement in their backyard,” he said.
While Guyon currently is working to optimize the performance of ground-based PIAA instruments, the foundation pointed out that the PIAA design significantly reduces the engineering and cost obstacles to deploying a planet-locating telescope in low-Earth orbit.
The fellowship also rewards Guyon’s contributions to other aspects of instrumentation, such as adaptive optics and low-cost, lightweight telescopes for amateurs.
“In all aspects of his work, from theoretical calculations to laboratory fabrication, Guyon relentlessly tests and pushes boundaries to construct instruments that are key to one of the great scientific adventures of our time – searching the galaxy for other planets like our own,” according to the nomination announcement.
Jim Wyant, former dean of the College of Optical Sciences, said: “When I met Olivier four or five years ago, I was extremely impressed. He's so clever, so full of ideas – there's no question that he deserves this.”
Topics:
Science and Technology
Share This
Related