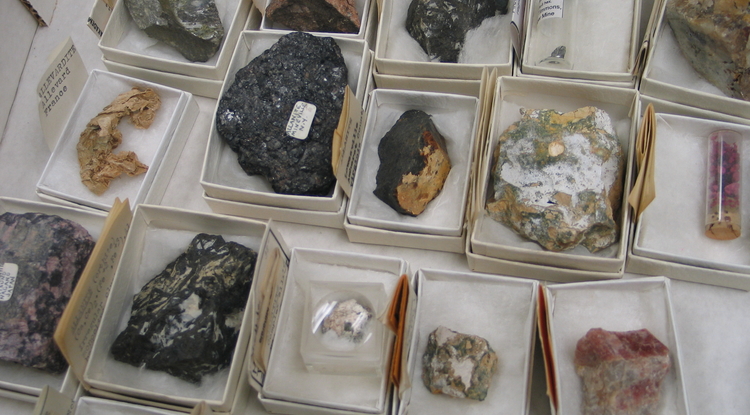 UA Mineral Museum Receives Its Largest Donation of Minerals Ever

The UA department of geosciences’ Mineral Museum recently received the largest single donation in the museum’s history - more than 8,000 mineral samples, including about 1,000 species the museum did not have. The donated samples will be used for research and may help identify rocks on Mars.
Alicia Saposnik
,
Department of Geosciences
July 25, 2013
Resources for the Media 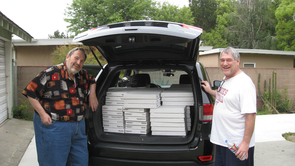 Rock Currier (left) and Robert Downs stand by Downs' rental car before his drive back to Tucson with the second load of the donated mineral collection. Half of the specimens were shipped, but the more delicate ones were packed and driven from LA. (Photo by Mark Candee/UA department of geosciences)

The University of Arizona's Mineral Museum recently received the largest collection of minerals ever donated to the museum, which is part of UA's department of geosciences. One of the world's most significant single donations of research minerals, the collection may help identify rocks on Mars.

The donation of more than 8,000 samples is eight times larger than any other gift of minerals to the museum. It includes approximately 1,000 species the museum did not previously own.

"This is a great collection that contains exactly the sorts of samples that are so valuable to science," said Robert Downs, UA professor of geosciences and UA Mineral Museum curator.

The donated minerals will be used primarily as research samples in the RRUFF project, which is creating a database of the characteristics of all known mineral species. Downs started the project with funding from Mike Scott, the founding president of Apple.

Having new minerals to study greatly expands the RRUFF database and increases its value to science. The database will allow scientists and the general public to identify minerals – both on Earth and as part of planetary exploration.

The project characterizes minerals using a technique called Raman spectrometry, which does not require destructive sampling. Once the RRUFF project has the signature of a mineral in its database, a detection device can identify a rock or mineral just by comparing its Raman "fingerprint" with ones already in the database.

Downs and Currier share a love of both the aesthetics and the science of minerals. They met about 20 years ago in Tucson, where Currier comes every February to attend the Tucson Gem and Mineral Show. Downs, also a co-investigator on NASA's Curiosity Mars rover project, stays at Currier's home during his trips to the Jet Propulsion Laboratory in California. Currier learned about the RRUFF project and the UA Mineral Museum from Downs and decided to make his gift.

Currier is a longtime wholesale mineral dealer. He has run numerous worldwide expeditions, amassing a systematic collection of minerals over the course of his career. Currier's interest in minerals began with his first job at Borax, where he worked in their chemical control laboratory at the open-pit borate mine and refinery at Boron, Calif.. At that point, he said, "Borate minerals became my passion, the first of many."

After 10 years, Currier decided to give the minerals business a try.

"I talked a buddy into going on a trip to India to hunt for zeolite specimens," he said. "In 1972 I left with a $500 round-trip plane ticket and $1,000 in my pocket, half of which was borrowed. I got a big pile of zeolite specimens."

This first trip to India was followed by many more, as well as trips to South America, Asia and Africa to find specimens for his wholesale business that continues today.

Downs says, "It all fits together. The minerals that Rock donated will become part of the RRUFF database, which we use to compare, identify, and characterize the minerals we find on Mars."

The UA Mineral Museum, owned by UA's department of geosciences, is located in Flandrau Science Center on the UA campus. The museum houses minerals for research as well as mineral displays that are open to the public.