The research aims to develop pharmaceutical dosage guidelines for diabetics traveling to high altitudes.
Karin Lorentzen
,
College of Pharmacy
May 4, 2010
Resources for the Media 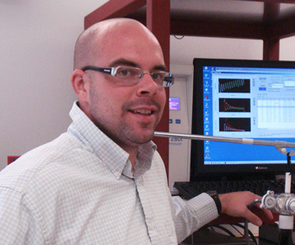 The University of Arizona and Northern Arizona University have been awarded $333,000 from the Arizona Biomedical Research Commission to study the effects of flying and other high-altitude activities on people who have type 1 diabetes.

The aim of the research is to develop pharmaceutical dosage guidelines for diabetics traveling to higher altitudes. Eric Snyder, assistant professor in the UA College of Pharmacy, and Christopher Baldi, assistant professor of biological sciences at NAU, will partner on the study.

According to Snyder, high altitude poses a challenge to the human lung and can result in de-oxygenation of the blood. Possible consequences of de-oxygenation include high-altitude sickness, pulmonary edema and even death. Adverse responses to altitude could be worse in diabetic patients, who often have a reduced ability to transfer oxygen from the lung into the blood.

Even moderate altitude, such as that created in a pressurized airline cabin, can negatively affect diabetics. A modern aircraft cabin can be pressurized only to 10,000 feet – so passengers flying at 40,000 feet might think they are breathing air pressurized at sea level, but they're not. They are getting less oxygen in their lungs than they would be if they were on the ground.

"This is a public health concern," said Snyder, "especially for diabetics whose lung function is often less efficient than healthy people's. It is a concern for people traveling by jet aircraft, climbing mountains, skiing, or just exercising at relatively high altitude."

Baldi, an exercise physiologist who grew up in the Colorado Rockies, is especially interested in the effect of altitude on diabetics' exercise.

"Small impairments in the diabetic lung that might go unnoticed at low altitude could prevent people with diabetes from enjoying ‘adventure activities' at higher altitudes like Flagstaff," he said. NAU is located in Flagstaff, Ariz.

To perform their research, Snyder and Baldi have set up identical labs at their respective locations. They will test both healthy and diabetic subjects, at rest and during exercise, at low altitude, in Snyder's lab in Tucson. The following day, they will take the subjects to Baldi's lab in Flagstaff, at 7,000 feet, and perform the same tests.

"Our plan is to stratify the data by how well the subjects' blood sugar is controlled, to see if response to altitude varies by blood sugar level," Snyder said. "Based on these results, we hope to be able to recommend optimum medicine dosages for type 1 diabetics at higher altitudes."

The team will study a total of 90 subjects. Preliminary results of the research are expected in 2011.