A UA-led team of researchers has just published an article about their work with a optical vortex coronagraph, a device they could advance astronomy research.
La Monica Everett-Haynes
,
University Communications
June 27, 2008
Resources for the Media
Extra Info: 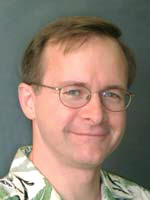 Grover A. Swartzlander Jr. is an associate professor in The University of Arizona’s College of Optical Sciences.

It is quite challenging to find and observe planets similar to our own, partially because nearby stars emit a flood of light making it difficult to study anything nearby.

In the search for exoplanets, a planet that lives outside of our Solar System, scientists have used the coronagraph – a device attached to a telescope that uses a disk to block out a sun or star’s light.

But two major problems have been that the coronagraph has not been able to remove all of the starlight and the nearby planets are, by default, sometimes 10 billion times fainter than stars.

A group of University of Arizona researchers believe the solution is in the optical vortex coronagraph. The team has been working with the device, using fundamental optics science as a backing. By doing so, it is easier to study planets without the blinding light coming from their parent stars.

The project and the findings are detailed in an article, "Astronomical Demonstration of An Optical Vortex Coronagraph,“ published in the current issue of Optics Express. The term “optical vortex” refers to the twisted diffraction of light that occurs when working with a lens that resembles a segment of a double helix.

The vortex lens, an “ultra” high-contrast imaging device , was fabricated by the Jet Propulsion Laboratory in Pasadena, Calif., one of the team's partners on the project.

A vortex coronagraph works by using a transparent spiral vortex lens and a two-part system that removes diffracted light from the imaging process, the newly published article notes.

In this process, scientists using a star gazing telescope must account for the atmosphere, the ability to focus on an object and the length of observation time required – all of which have the potential of jeopardizing imaging.

The UA’s Steward Observatory also was involved in the project, providing the telescope and an adaptive optics instrument that stablized images of stars, sometimes more than 100 light years away from Earth.

“It’s hard to get optical information about the planets, such as their spectrum. The main motivation is to find an optical way of turning off a star so you can see the planets nearby stars,” said Grover A. Swartzlander Jr., an associate professor in The University of Arizona’s College of Optical Sciences.

“Until about the last 10 years, the traditional 'Lyot' coronagraph was the only kind of coronagraph used. But we came across this concept of using the optical vortex lens which, theoretically, can lead to an ideal performance,” said Swartzlander, the lead researcher on the paper.

The Catalog of Nearby Exoplanets reports that 228 such planets have been found so far in nearby systems.

During the project, Swartzlander collaborated with Laird Close, a UA associate professor of astronomy.

Swartzlander's graduate students in optical sciences, Erin Ford and Rukiah Abdul-Malik along with Mary Anne Peters, one of Close's undergraduate students who is studying astronomy and physics, also helped build and test the project's system.

For their research, the UA-led team used the 8-inch refractive finder telescope on the Raymond E. White telescope located in the historic Steward Observatory on the UA’s main campus.

Using the optical vortex lens, which only works with very precise refractive telescopes, the team was able to reduce the light of a star located in a binary star system by 97 percent without stifling the light coming from the weaker companion star – a tremendous feat, Swartzlander said.

But the use of the optical vortex is promising and could someday benefit space missions and enable scientists to search for biomarkers – like water vapor and oxygen – on Earth-like planets, Swartzlander said.

“Using simple adaptive optics techniques we have made the first convincing demonstration of an optical vortex coronagraph that is coupled to a star-gazing telescope,” Swartzlander said. “There can be a big leap from the lab to the telescope, but we wanted to demonstrate that this is not some esoteric thing; you can actually get this to work.”

In the team’s newly published article, members explain how they were able to use a telescope outside of their usual laboratory setting to demonstrate the vortex coronagraph. “In theory the vortex coronagraph has the potential to achieve the 10 billion contrast required to see Earth-like planets around nearby stars,” Swartzlander said.

But reaching that point will require quite a bit more research.

The next steps are additional experiments to hone the findings, before placing the device on a space telescope to “avoid distortions caused by the atmosphere,” Swartzlander said.

That is critical to making the experiment work, he said.

Tucson and California researchers relied on numerous grants and funding to complete the project, including those from the U.S. Army Research Office, the Jet Propulsion Laboratory, NASA's Origins program and the National Science Foundation.

“Everybody realizes that any device used to directly observe Earth-like exoplanets would require an expensive space telescope,” Swartzlander said. "But this research is gearing up for that possibility.”