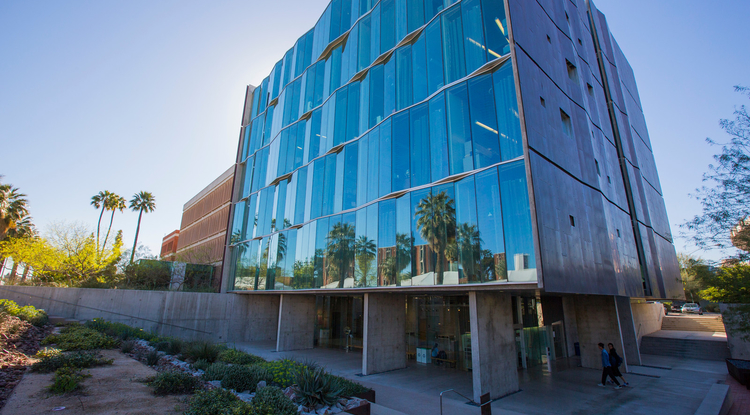 UA researchers are part of a public-private partnership that has just received $110 million in federal funding to, among other things, revolutionize Internet communication. (Photo credit: FJ Gaylor)

The UA is part of a project receiving $110 million in federal funding to revolutionize Internet communication, with other benefits expected to impact multiple commercial technology sectors.
University Relations - Communications
July 27, 2015
Resources for the Media 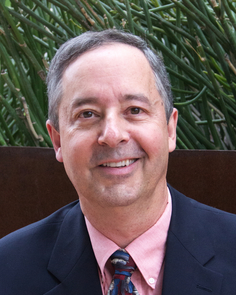 Vice President Joe Biden announced today that a New York-based public-private partnership – of which the University of Arizona is a part – has been selected to receive $110 million in federal funding to advance U.S. leadership in photonic integrated circuits (PICs), technology expected to revolutionize Internet communication and impact multiple commercial technology sectors across the nation.

The American Institute for Manufacturing Integrated Photonics (AIM Photonics) team was formed in response to President Barack Obama's fall 2014 announcement of Integrated Photonics as a major component of the National Network of Manufacturing Innovation (NNMI) program. The NNMI is a cross-sector, national effort to secure U.S. leadership in emerging technologies that will create high-quality manufacturing jobs and enhance America’s global competitiveness.

"The University is honored to be a part of this incredibly important effort," said UA President Ann Weaver Hart. "This technology, which touches so many industries, including defense, will have far-reaching impact for the nation. I am proud of our College of Optical Sciences' international reputation as a science and technology leader that led to the UA’s participation in this pivotal partnership."

"Today's announcement is a testament to the outstanding team of industrial and academic leaders assembled by AIM Photonics and its plan to establish the U.S. as a global leader in this emerging technology," said Dr. Michael Liehr, AIM CEO and SUNY Poly Executive Vice President of Innovation and Technology and Vice President of Research.

"Being awarded the Integrated Photonics Institute for Manufacturing Innovation (IP-IMI) would not have been possible without the critical support of Governor Andrew Cuomo, whose pioneering leadership in establishing New York State's globally recognized, high-tech R&D ecosystem has enabled historic economic growth and innovation and secured our partnership with the state of Arizona," Liehr said. "SUNY Poly is excited to be working with partners such as the University of Arizona's College of Optical Sciences on this initiative, which will be truly transformational for both the industry and the nation."

The Department of Defense will continue its lead role representing the federal government in partnership with AIM Photonics, along with significant involvement from the Departments of Commerce and Energy, as well as NASA and the National Science Foundation. The award of $110 million in federal funding will be combined with a commitment of $250 million in funding from the State of New York, and matching contributions from the various participants totaling over $500 million for the duration of the program.

The primary AIM Photonics team, led by SUNY Polytechnic Institute in New York State, includes faculty from the University of Arizona, Massachusetts Institute of Technology, University of California Santa Barbara, University of Rochester and industry partners such as Intel, HP, IBM, Cisco, Infinera, Raytheon, Lockheed Martin, and Northrup Grumman. Overall there are more than a dozen other prestigious universities and 50 large and small companies participating in the team.

"It's an honor to be part of this highly accomplished team of researchers and industry leaders," said Dr. Kimberly Andrews Espy, senior vice president for Research at the University of Arizona. "This award, and the UA’s role in championing the program, shows the breadth and depth of our College of Optical Sciences."

PIC technology enables optical systems to be miniaturized and fabricated on semiconductor chips. Just as electronic integrated circuits (ICs) revolutionized electronics by miniaturizing transistor circuitry, PICs integrate lasers and other optical devices to route and process information with reduced size and power. PICs can also scale in complexity to do things that would simply not be possible using conventional optical design approaches, and the new partnership will create a national “foundry” infrastructure to promote broader access to the technology.

Over the last 18 months, the UA College of Optical Sciences' Dean Tom Koch helped to develop both the technical concepts and the academic, industry and government partnerships to realize the revolutionary national manufacturing capability that AIM Photonics represents.

"It has been gratifying to see so many of the major stakeholders in the photonic integration community join together to support this major federal initiative," Koch said. "We are also indebted to The National Photonics Initiative for its support in advancing the cause. The applications that will be enabled by chip-scale, highly integrated photonics and electronics are boundless."

In addition to the UA College of Optics receiving funding as a participant in AIM Photonics research and education projects over the next five years, as a member of the leadership team Koch will chair the Technology Advisory Board, which will oversee the portfolio of AIM Photonics projects.

Photonics and PIC technology is critical to optical fiber communications and the Internet, and research and education in this area been a cornerstone of the College of Optical Sciences' modern history through its lead role in the NSF's Center for Integrated Access Networks. University participation in AIM Photonics will involve a team of prestigious UA faculty initially including Dr. Nasser Peyghambarian, Dr. Robert Norwood and Dr. Stanley Pau.

The biggest dimension of the program extends well beyond basic research and education, and targets developing the right team of industrial partners to promote a sustainable new national manufacturing capability.

"Our college has always had a unique collaborative linkage to industry," said Justin Walker, associate dean for Business Development and Administration. "We have worked closely at the national, regional and local level with our partners to make sure we had the proper private sector buy-in to effectively differentiate the effort."

In addition to major national firms noted earlier, the local "Optics Valley" cluster of small, medium and large companies will be connected to the national network in pursuit of program goals. The Arizona Commerce Authority has committed up to $2.5 million of tax incentives over the initial five-year period to Arizona companies that support AIM Photonics programs at UA.

"The support of state of Arizona has positioned us well for national participation. The role and influence of our own Optics Valley here in Tucson should also not be understated. These firms continually demonstrate the University’s propensity to move discovery to the marketplace, and I firmly believe our combined regional strength will assist in furthering UA’s role in this initiative," added Koch.