From connections to content, Beichuan Zhang, a UA assistant professor of computer science, is part of a team receiving up to $8 million in National Science Foundation funding to investigate ways to revolutionize the Internet's architecture.
La Monica Everett-Haynes
,
University Communications
Nov. 2, 2010
Resources for the Media 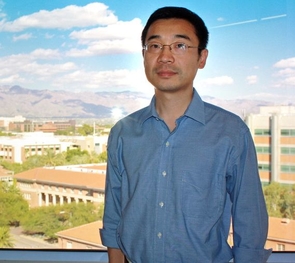 UA computer scientist Beichuan Zhang was part of an invitation-only meeting of experts with the National Science Foundation that has led to major initiatives to evaluate how to push for a major evolution for the Internet. (Photo credit: Beatriz Verdugo / UANews) 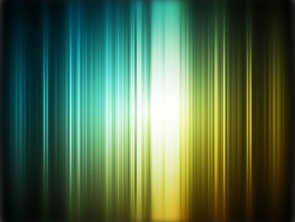 The Named Data Networking project will seek to address the technical challenges in creating a network, including routing, network security, content delivery and privacy concerns, among other issues.

Over the Internet's nearly 40-year history – one marked by increased popularity and complexity – applications and hardware utilized to operate the megasystem have continually seen updates and advances.

But the Internet's architecture has yet to undergo such an evolution, even though the ways in which the Internet is used today are drastically different.

Originally envisioned as a small-scale communication network, today's Internet is much larger and complex, driven by "different purposes and different contexts," said University of Arizona assistant professor Beichuan Zhang, a member of a 10-university team that has initiated a project to revolutionize the Internet's architecture.

Led by researchers at the University of California, Los Angeles, the Named Data Networking project has been named one of four by the National Science Foundation to receive up to $8 million.

The agency's Directorate for Computer and Information Science and Engineering, or CISE, announced that the project and three others across the nation would be funded over a three-year period as part of the NSF's new "Future Internet Architecture” program.

Zhang, a UA computer science faculty member, said he and his collaborators are working to produce "the next generation – the new Internet."

Today's Internet is built on a client-server model where the location of where data resides – not the actual data itself – plays the most important role in information being communicated over the Internet.

Zhang's team is working to take the focus off the TCP/IP connection – also known as containers that transmit data – and place it on the data being transmitted.

"As our reliance on a secure and highly dependable information technology infrastructure continues to increase, it is no longer clear that emerging and future needs of our society can be met by the current trajectory of incremental changes to the current Internet," said Ty Znati, director of the Computer and Network Systems Division within CISE, said in a prepared release.

"Thus our call to the research community to propose new Internet architectures that hold promise for the future," Znati added.

Zhang and other members of the research team will begin meeting with NSF representatives and other FIA teams on Nov. 15 to begin developing the new architecture.

"We're trying to change the network, not the users or applications," Zhang said. "And we want a model that fits application and user needs to ensure that application development is easier and that there also is more efficient content delivery."

At the UA, Zhang is involving a number of his graduate students in computer science. They are: Varun Khare, Xin Zhao, Cheng Yi and Qing Ju.

The team intends to have a prototype developed by the end of the grant funding period.

Broad-based content creation, dissemination and delivery is the mainstay today, but the efficiency and the protections are not always in place.

"As a user, I might not care where the information comes from so long as it is the document I want," Zhang said.

Consider social networking or news sites with a highly popular video, for example. If too many people are drawn to the site, it could crash the system because each user is putting in a new request for the video.

"Why should we have to retrieve the same information multiple times? If you had a router that could store the information locally, and match the stored information with future requests, you could serve many more users," Zhang said. "That would be one of the major benefits."

The new architecture has other implications, particularly for those involved in e-commerce.

Structured as-is, individuals must trust that secured sites are working, which poses as least two problems: The current Internet architecture does not name the data being transmitted, and the IP address – the computer-specific internet protocol originally created decades ago to facilitate communication between two entities – may be on the cusp of being phased out, Zhang said.

"Naming the data would get into some different security paradigms," Zhang said. "Right now, what is secure is the channel, not the data."

That is because the early Internet was not originally designed to protect highly sensitive information that banks and other financial organizations now transmit.

The NDN is projected to aid in improved content delivery and security by not merely labeling data packets by addresses – the site for the stored information – but would identify the actual data by unique names and carry authentication information. This would also avoid the common practice of duplicating data for transmission purposes.

It would serve as a "universal overlay," adding security building blocks into the network architecture, Zhang said.

"We haven't seen too many fundamental changes with the Internet architecture," he added. "But what we need is a fundamental upgrade for the next generation. We can't just wait until the thing breaks."