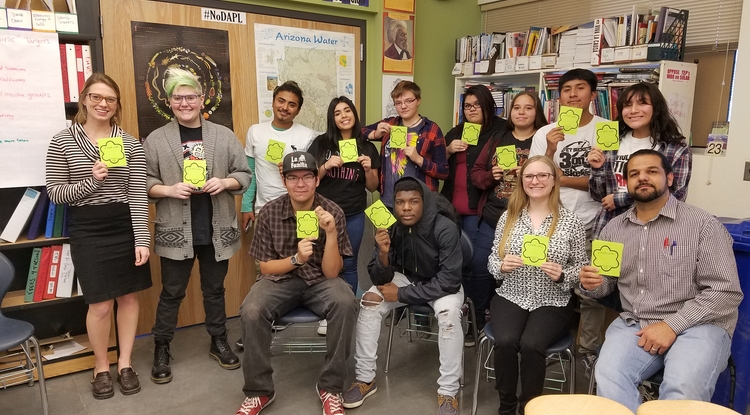 UA students Sarah Heath Howe (far left) and Sarah Johnson (seated, second from right) meet weekly with Changemaker High School students to help them prepare for their summer trip to Japan. It will be the first time on an airplane for some of the students, like Ricardo Goodman (in the baseball cap).

The College of Education is working with Changemaker High School on a project designed to raise awareness of cyberbullying and promote the spread of kindness online.
Alexis Blue
,
University Communications
Feb. 13, 2018
Resources for the Media 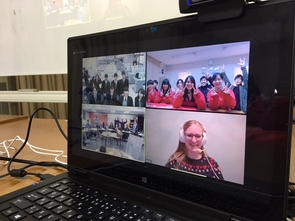 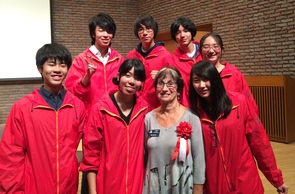 UA education professor Sheri Bauman (front row, third from left) has presented internationally on the topic of cyberbullying and had the idea for an international exchange project with Japan.

Ricardo Goodman believes the internet can be something beautiful — a place to gain knowledge, to exchange ideas, to be entertained. But he's also familiar with some of the perils of the online world, especially on social media.

At 16, Goodman says he has been a victim of cyberbullying. And he says he has friends who have encountered the problem "to the extreme."

For him, the issue of cyberbullying is personal, and he's determined to help create a kinder environment for teens — and everyone else — online.

Goodman is one of 10 students from Changemaker High School in Tucson working in partnership with the University of Arizona College of Education and Tucson nonprofit Ben's Bells on a cultural exchange project to promote being kind online.

"My hope for this project is to open the public's eyes," said Goodman, a junior at Changemaker, a charter school. "A lot of people don't know what it means to be cyberbullied. Maybe they've seen it on the news and in documentaries, but they don't really know how it affects people."

In June, Goodman and his classmates will travel to Japan to meet with a group of Japanese high school students who also are working to combat cyberbullying and promote kindness online. During 10 days there, they will attend Japan's Smartphone Summit, an annual program that engages young people in discussing risky online behaviors and possible solutions.

The Japanese high school students will then visit Tucson in August and, as part of their trip, attend a kindness-centered event organized by Ben's Bells, an organization that actively promotes the spread of kindness.

The goal is that the students from the two countries will share ideas and ultimately come together to develop a joint project that could be implemented across cultures to address what has become a global problem, especially for young people.

"We're seeing cyberbullying all over the world. It's very widespread. Wherever there is technology, there is misbehavior or cruelty online," said UA education professor Sheri Bauman, one of the exchange project's coordinators and co-editor of the book "Reducing Cyberbullying in Schools: International Evidence-Based Best Practices."

"Often, anti-bullying and anti-cyberbullying curriculums are developed by adults without input from the kids who know what's going on, and our belief is who knows better than the youth what the youth will respond to and need?" said Bauman, who teaches in the Department of Disability and Psychoeducational Studies and directs the UA's graduate degree program in school counseling.

In preparation for their trip abroad, the Changemaker students are meeting weekly with two graduate students from the UA College of Education, who are helping to facilitate project development while also teaching the high schoolers about Japanese culture and language basics.

They also meet monthly via videoconference with the Japanese high school students and their project advisers to discuss, through a Japanese-English translator, topics related to online behavior.

"We often brainstorm — examples of cyberbullying, what could steps be to stop or prevent this, what does kindness mean to you, how can we promote kindness in their schools," said Sarah Heath Howe, a UA master's student in school counseling. "This is a really special group of kids. They come up with really impressive ideas."

Heath-Howe is working with the students alongside fellow master's student Sarah Johnson, who is also helping to coordinate the students' travel and will accompany them on their trip abroad.

While the students in both countries are working to increase awareness and prevention of cyberbullying, their projects won't just focus on what not to do online, but also on what people can do to spread kindness online, incorporating some of the concepts promoted by Ben's Bells.

"So much of the stuff that's out there is about the bad things, and this idea is to switch the focus to being kind online," Bauman said.

Bauman, who has done extensive research on bullying and cyberbullying and has presented on the topic at local, state, national and international levels, approached some of her colleagues in Japan with the idea for an international exchange project and helped them develop a funding proposal.

The project is supported in part by a grant from the U.S. Department of State to Osaka Kyoiku University in Japan, which is working with the Japanese high school students. The Tucson students are raising additional donations to cover travel expenses through a GoFundMe page.

For some of the students involved — like Goodman, a Tucson native — this will be their first time visiting a foreign country.

"I've never been on a plane before. I've only traveled by car," Goodman said. "The thing I really look forward to is meeting with and understanding another culture."

Bauman said she hope the project helps build in students a sense of service and contributing to both their school and their larger community.

"We want to build the sense that kids can make a difference and also help them develop intercultural understanding," she said. "The bottom line is: We're all human beings."