Many in the sample of eight high-poverty Tucson neighborhoods were employed, and the leading source of struggle was the cost of housing.
Lori Harwood
,
UA College of Social and Behavioral Sciences
May 22, 2015
Resources for the Media 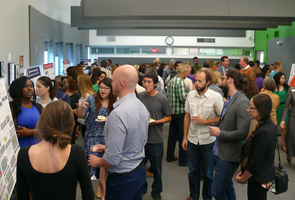 More than 100 community members, city officials and nonprofit organizers turned out recently to hear University of Arizona students from the Poverty in Tucson Field Workshop present the results of their semester-long efforts to collect data from low-income households across Tucson.

The Poverty in Tucson Field Workshop is a partnership involving the UA College of Social and Behavioral Sciences, the Mayor’s Commission on Poverty, and local nonprofits such as Habitat for Humanity Tucson, the Community Foundation for Southern Arizona and the Community Food Bank of Southern Arizona. The results were presented at a community forum at Habitat for Humanity.

"Tucson has a high and unfortunately persistent problem with poverty, with about 25 percent of our city population living below the poverty threshold," said Brian Mayer, associate professor in the UA School of Sociology, who teaches the workshop course along with sociology graduate student Julia Smith. Mayer is also a fellow in the Agnese Nelms Haury Program in Environment and Social Justice.

"Even though we know (about the problem), we wanted to learn more about what the lives were like of low-income Tucsonans," Mayer said. "How are these households coping and what strategies are they using?"

Over seven weeks, the students knocked on 2,000 doors and completed 257 surveys in eight neighborhoods designated by the census as having high poverty rates. More than half their sample lived in "extreme poverty," which means an income of less than half the poverty threshold.

During the forum, Mayer gave a short summary presentation, and groups of students explained posters representing their findings. (Posters can be viewed here.)

"A lot of the people in our sample were working full time or part time. Also, a large number were fairly well educated," Mayer said. "One thing we talked about in class was the myth of the unemployed welfare recipient, that most people are just at home living off the government."

The leading source of struggle for respondents was housing costs.

"When we asked people to prioritize their expenses, if No. 1 was rent, food was very rarely in the top five," Mayer said. "It says we are doing a pretty good job with food assistance."

Even so, about one-third of the extreme poor were regularly skipping meals.

Several students commented about how impressed they were by the resourcefulness of the people with whom they spoke.

"I was surprised by how resilient people were," said Sarah Schwartz, a student in care, health and society and in nutritional sciences. "People were really struggling, but they were happy and doing what they could."

The percentage of interviewees who were not using government or charitable assistance was one of the biggest surprises for the group. Almost 25 percent of those living in extreme poverty did not use government assistance. The main government support used by respondents was SNAP, or Supplemental Nutrition Assistance Program.

Among the extreme poor, more than half reported never receiving any type of nonprofit or charitable funding.

"Most weren’t using them because they weren’t aware of them," said Brandon Peacock, a student in the class. "When we gave them the information sheet, they were seeing the names of these organizations for the first time. We saw a very low percentage of people who had attempted to get help from a nonprofit organization and were turned away."

Mayer said the plan is to interview the same households next year, and he invited local nonprofits to add their names to the service provider list and to help him craft future questions.

In addition to helping collect data that can be used to improve the lives of the poor, the Poverty in Tucson Field Workshop is part of the UA’s commitment to the goal of 100% Engagement.

"I liked that we actually received hands-on experience," said Chantelle Figueroa, a sociology and psychology major. "It wasn’t just sitting in the classroom. We were able to talk to people."