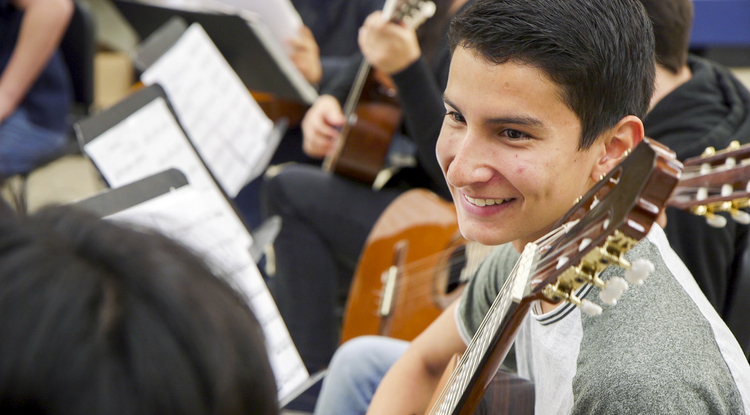 Pablo Esteban Quiñonez Paz learned to play guitar through Lead Guitar, part of the UA CFA in Schools outreach program. He plans to pursue a degree in music at the UA. (Photo: Bob Demers/UANews) 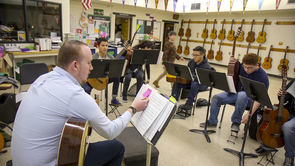 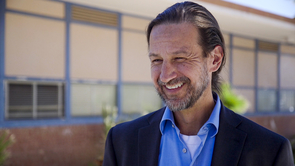 Brad Richter started Lead Guitar two decades ago to bring guitar education to students without access. The program has now been used as a model for dance and percussion instruction as well. (Photo: Bob Demers/UANews)

When Pablo Esteban Quiñonez Paz was a young boy, he listened to his father and brother play "Spanish Ballad" on the guitar and told himself that he, too, would one day learn to play the song.

Fast forward to 2014, when he and his family immigrated to the U.S. from Hermosillo, Sonora, Mexico. Quiñonez Paz was 14 years old and adapting to an entirely new culture and way of life when he set foot in his first guitar class at Amphitheater High School in Tucson.

Now an 18-year-old recent graduate of the school, he's able to play "Spanish Ballad" and a host of other tunes, including the Eagles classic "Hotel California," which he and his classmates plucked their way through during a recent spring morning rehearsal.

Quiñonez Paz is one of 16,500 young students who has benefited from arts education offered through the University of Arizona CFA in Schools program, which works with 75 partner schools in Arizona and across the country to provide music and dance instruction.

Based in the UA College of Fine Arts, CFA in Schools deploys experts to help establish music and dance programs in schools that might not be able to offer such programs on their own, either due to lack of resources or cuts to arts funding.

Those experts spend two to three years training and mentoring teachers, who may or may not have experience teaching arts disciplines. The idea is that they can eventually sustain the classes on their own. In Arizona, the trainers are usually UA alumni, students or faculty members.

"The goal for CFA in Schools is to get the highest quality arts education in the hands of the students who could typically least afford it," said Brad Richter, director of arts outreach in the UA College of Fine Arts. "We search for schools that have 80% or more of their students eligible for free and reduced lunch, and we offer free programs to those schools."

CFA in Schools has three offerings for middle and high school students: Lead Guitar for aspiring guitarists, UpBeat for drummers, and Step Up for dance. There is also a general music program called Music First for students in kindergarten through second grade.

Richter started the Lead Guitar program independently in 1999 while working as a professional musician. After playing a concert in northern Arizona, he was asked to visit Page High School to teach a guitar workshop. There, he was inspired by a group of students who had begun learning guitar on their own, without any formal instruction. Richter wrote a guitar curriculum for the school's choir teacher so she could help the students continue learning.

The program grew from there, with Richter and colleague Marc Sandroff eventually establishing Lead Guitar as a 501c3 nonprofit organization in 2007. Six years later, in 2013, Richter joined the UA and brought the program with him.

With the encouragement of Jory Hancock, director of the UA School of Dance and then-dean of the College of Fine Arts, Richter began using the Lead Guitar model to develop similar programs in different arts disciplines. And so CFA in Schools was born.

Since 2013, CFA in Schools has grown from 17 to 75 schools, including several locations across Arizona, as well as in Chicago, Los Angeles, Colorado and Oklahoma. Lead Guitar remains the program's most popular offering.

Schools chosen to partner with CFA in Schools are typically located in areas where there is strong university partner from which to draw expertise and arts enrichment opportunities.

In addition to its instructional component, CFA in Schools brings students to universities to see performances and to perform in their own showcase concert at the end of the school year.

The program also helps arrange school visits from professional performance artists. In Tucson, for example, world-class artists on the UA Presents season schedule are sometimes brought in to perform for the students at their schools.

"There are three important legs to what we do: the in-school instruction from university-level instructors, training the co-teachers to be able to eventually teach the class on their own, and community and university experiences that get the kids out of school and onto campus," Richter said. "We want them to feel comfortable here and to be celebrated here and to get used to the idea that a university is a place that they're welcome."

The program also serves as a good training ground for university students who are preparing for careers in arts education.

Steven Lerman, who is finishing a doctorate in classical guitar performance in the UA Fred Fox School of Music, teaches guitar alongside the music instructor at Amphitheater High School. Quiñonez Paz was among his students.

Lerman has been involved with Lead Guitar since he was a UA senior, and he says it's helped him hone his skills as both a teacher and performer.

"It's really fulfilled me with my studies to take what I've learned and help other kids learn and experience something different – something they wouldn’t have had the opportunity, maybe, to do," he said. "As a teacher, it's been amazing to get all that extra experience and to work under different conditions and have to be able to respond to things, but the best part about it has been to just work with the kids."

The intention of CFA in Schools is not to cultivate the next generation of professional musicians, but to give young people – many of whom may come from difficult circumstances – the confidence to pursue whatever they want to do next, said Holly Holmes, assistant to the director of CFA in Schools.

"The goal is not to bring up students who are all going to major in the arts, necessarily, but to have that as part of their critical thinking," Holmes said. "It's not about becoming a spectacular performer, but about realizing their potential."

For some, though, a career in the arts does become the ultimate goal.

Now that Quiñonez Paz has graduated from high school, he plans to attend the UA and double major in music theory and guitar performance. He wants to continue performing, with the support of his family and friends.

"It's nice to show the people what you can do," he said, "and that you can become something bigger."