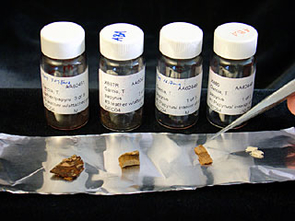 Scientists at The University of Arizona's NSF-Arizona Accelerator Mass Spectrometry (AMS) Laboratory radiocarbon dated these samples of an ancient Coptic manuscript at between A.D. 220 and A.D. 340. The manuscript contains the only known surviving Gospel of Judas. Left to right are a sample of leather binding that incorporates some of the papyrus on which the manuscript was written; a sample of just the leather binding; a sample of untreated papyrus; and a sample of papyrus after cleaning. (Photo: Lori Stiles) 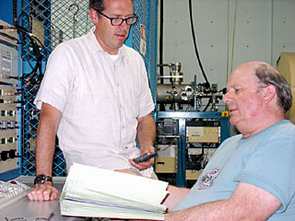 Scientists at the University of Arizona's Accelerator Mass Spectrometry (AMS) lab in Tucson, Ariz., have radiocarbon dated an ancient Coptic manuscript containing the only known surviving Gospel of Judas at between A.D. 220 and A.D. 340.

A. J. Tim Jull, director of the National Science Foundation-Arizona AMS Laboratory, and Gregory Hodgins, assistant research scientist, radiocarbon dated five tiny samples of papyrus and leather book binding from a collection of ancient documents, known as a codex, that was discovered only about 30 years ago in Egypt.

"All five samples, remarkably, are the same age," Jull said. "All date to the third to fourth century, clearly before the Council of Nicaea, which presumably would have suppressed such a document."

The first Council of Nicaea, convoked by the Roman Emperor Constantine the Great in A.D. 325, was the first ecumenical conference of bishops of the Christian Church. It was historically significant because it was the first attempt to attain consensus in the church through an assembly representing all of Christendom.

The UA radiocarbon age is evidence that helps verify that the ancient papyrus text titled "Gospel of Judas " is a genuine Coptic manuscript, the National Geographic Society announced at a Washington D.C. press conference today (April 6). The gospel is part of a 66-page Coptic (ancient Egyptian) manuscript that also contains the Epistle of Peter to Philip, the First Apocalypse of James and a fragment of an as-yet-untitled text, National Geographic said.

The Society collaborated with the Maecenas Foundation for Ancient Art in Basil, Switzerland, and the Waitt Institute for Historical Discovery in La Jolla, Calif. in an international effort to authenticate, restore and translate the codex.

Jull and other experts - including historians, theologians and other scientists -- examined the document at a workshop in Geneva, Switzerland, in early December 2004. The 26-page Gospel of Judas was written on 13 sheets of papyrus, both front and back. Conservators had carefully mounted the fragile pieces between sheets of glass.

Jull chose the samples to be radiocarbon dated after discussions with Rodolphe Kasser, a Swiss who is regarded as one of the world's preeminent Coptic scholars. An expert papyrus conservator then cut the samples at the Geneva workshop.

The UA scientists completed the radiocarbon dating tests in early January 2005. They had five samples. However, one book binding piece also contained papyrus, so they determined radiocarbon ages for both leather and papyrus in that fragment. The calibrated ages for all individual samples agreed to an astonishing degree within the third or fourth centuries A.D., Jull and Hodgins said.

"Given the clustering of the dates the five samples and the nature of the object (a book), one can argue that, in fact, a single object was measured six times," they said.

"The codex has been authenticated as a genuine work of ancient Christian apocryphal literature of five fronts: radiocarbon dating, ink analysis, infrared photography, contextual evidence and paleographic evidence," Garcia said in a National Geographic news release. "This dramatic discovery, the most significant biblical find in 60 years, enhances our knowledge of the history and theological viewpoints of the early Christian period, and is worthy of continued study and reflection by historians, scholars and theologians."

The Gospel of Judas gives a different view of the relationship between Jesus and Judas than do the canonical gospels of Matthew, Mark, Luke and John. According to the newly discovered gospel, Judas acted at Jesus' request when he delivered Jesus to Roman authorities. The manuscript reflects themes that scholars regard consistent with Gnostic traditions.

The leather-bound papayrus codex was discovered in the 1970s near Al Minya, Egypt. It then circulated among antiquities traders from Egypt to Europe to the United States. The codex languished in a safe-deposit box on Long Island, N.Y., for 16 years before it was bought in 2000 by a Zurich-based antiquities dealer, National Geographic said. The dealer turned it over to the Maecenas Foundation in February 2001 for restoration and translation. The manuscript will eventually be returned to Egypt, to be housed in Cairo's Coptic Museum, National Geographic said.

On Sunday, April 9, the National Geographic Channel (NGC) will premier its exclusive, 2-hour documentary about what has happened to the codex since it was found. The documentary will air at 8 p.m. Eastern Time (7 p.m. Pacific Time) and again at 10 p.m. Eastern (9 p.m. Pacific). An NGC video crew shot footage of UA radiocarbon dating for the documentery last October.

The UA's National Science Foundation AMS Lab, established in 1981, has become a world leader in dating objects by their radiocarbon and other radioactive isotope content.

AMS scientists use only milligrams of material - papyrus and leather, in this case - for radiocarbon dating. They burn the sample and convert the carbon dioxide given off by combustion to graphite. They use a huge machine, the accererator mass spectrometer, to measure how much radioactive carbon, or carbon 14, is present in the graphite sample. Radioactive carbon decays at a known rate, giving scientists the object's radiocarbon age. They convert radiocarbon years to known calendar years by using the calibrated tree-ring record.

Other famous religious objects that have been precision-dated at the UA laboratory include the Shroud of Turin and the Dead Sea Scrolls.