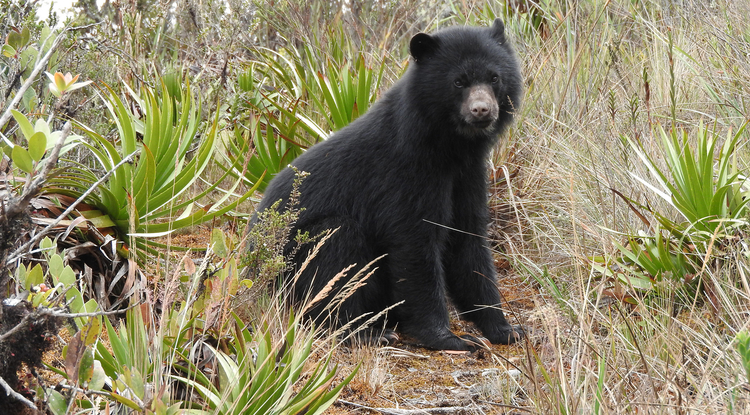 In the high Andes of Colombia, University of Arizona doctoral student and Fulbright scholar Ivan Mauricio Vela-Vargas recently directed the first successful capture and satellite collaring of an Andean bear in the Chingaza National Natural Park.

The Andean bear, also known as the spectacled bear, has been listed as vulnerable on the International Union for Conservation of Nature Red List of Threatened Species since 1982. It is the only bear species found in South America.

The approximately 6-year-old bear, nicknamed Xué, is a 220-pound adult male in perfect health. Xué was fitted with a telemetry collar with satellite technology that periodically transmits information about his movements in the Chingaza National Natural Park and surrounding areas in the east Andean range of Colombia.

Few Andean bears have been collared, and the effort was the first of it’s kind within a Colombian national park. The capture and marking process allowed the research team to register health information and provide support data to genetic conservation currently being developed between the Alexander von Humboldt Research Institutes and the National Natural Parks of Colombia.

“This is the first successful capture of an Andean bear inside of a protected area in Colombia,” said Vela-Vargas, who is pursuing a Ph.D. in the UA School of Natural Resources and the Environment. “The information we are receiving right now will allow us to understand how Andean bears perceive the landscape in the Chingaza Massif and give us new tools for monitoring the species inside and outside of protected areas.”

Since his release, Xué has not disappointed, traveling nearly 12 miles across the páramo grasslands at elevations surpassing 10,000 feet. By tracking Xué’s movements, researchers are hoping to learn more about the state of the bear population in Colombia. Their goal is to provide technical and scientific information to inform practices that contribute to conservation efforts of this vulnerable species.

Andean bear conservation transcends the management of a single protected area. The project was a collaboration between the Chingaza National Natural Park, the UA School of Natural Resources and the Environment, ProCAT Colombia, the Wakatá Biopark, the Phoenix Zoo Arizona Center for Nature Conservation and the Reid Park Zoo.

"Collaboration is the key to successful conservation, where the collective efforts of many can be focused on major challenges to biodiversity,” said John Koprowski, director of the School of Natural Resources and the Environment. "Andean bears are icons of the high Andes, but we know little about this declining species. The work that Mauricio is conducting will help fill these knowledge gaps."

“This is a huge advance in scientific research of the species in the country," said Vela-Vargas, who recently assumed leadership of the Colombian bear research for the Wildlife Conservation Society. “We are constantly receiving information that will allow us to help in the conservation and research of this iconic species for Colombia and South America.”