Regents' Professor Lynn Nadel and psychology colleague Jamie Edgin have developed a series of cognitive tests that may aid in better understanding and treating the genetic disorder.
Jeff Harrison
,
University Communications
Aug. 25, 2010
Resources for the Media 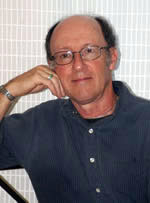 Neuroscientists in the Down Syndrome Research Group at the University of Arizona have created a battery of tests that quickly aid in the assessment of the cognitive abilities of persons with Down syndrome. The UA collaborated on the development of the tests with colleagues at Johns Hopkins University and Emory University.

The tests – a series of computer exercises that are not language dependent – offer clinicians and other researchers a new tool that can help determine both the developmental trajectory of those with Down syndrome and aid in devising drug and behavioral interventions.

The study, "Development and validation of the Arizona Cognitive Test Battery for Down syndrome," is published in the Journal of Neurodevelopmental Disorders.

Jamie Edgin, a member of the UA psychology department who helped develop the new test battery, said the test is portable and can be administered in about two hours.

"In the past when we would assess cognition in Down syndrome it would be over the course of several days. This is really compact and practical," Edgin said.

Lynn Nadel, a Regents' Professor in psychology who leads the research group, said the concept for the test battery originated about 15 years ago, but the actual task of constructing it, the "hard slog of validating them, was about three years of work."

Down syndrome is a genetic disorder caused by the presence of an extra 21st chromosome. It occurs once in approximately 800 to 1,000 live births and those with it often have mild to severe developmental disabilities as well as health issues that include heart defects and the early onset of Alzheimer's dementia. New research also suggests connections between chromosome 21 and other genes point to some of these problems.

Down syndrome primarily affects three major parts of the brain: the prefrontal cortex, hippocampus and cerebellum. Neuroimaging, primarily fMRI and PT scanning, was a key part of Edgin and Nadel's research. Images show that individuals performing certain tasks engage one or more of those three parts of the brain. Researchers also know that when certain parts of the brain have been damaged that particular tasks can or cannot be performed.

Those with Down syndrome run a broad range of outcomes, from mild to severe cognitive impairment depending on development in the three brain regions that are at risk. The hope is that the test battery is a way to figure out, for any given child, where they fit developmentally within each of these particular domains. And because Down syndrome is caused by an extra chromosome with many genes involved, there is considerable variability in the outcome for a given child.

"You might have a kid who is weak in one area but strong in another," Nadel said. "The profile is going to vary from person to person. The battery will give us a handle on understanding that profile so you might be able to target an intervention in a specific way for a given person. It also would allow as early as possible to understand the likely trajectory for any given child, and what might be the most appropriate forms of intervention."

The battery also could have value as a before-and-after tool for assessing interventions. Knowing what therapy might work best and whether that has made a difference requires a precise set of measures. It also becomes a key piece of information for assessing the outcome of various clinical trials.

Jamie Edgin said that is where the field is headed.

"That is why this is so key right now and why we're having so much interest in the battery. People in the pharmaceutical industry are developing clinical approaches. They have drugs they are interested in testing in phase-one clinical trials and they need an assessment tool like this. Groups from all around the world are getting in touch with us wanting to incorporate this battery either into their clinical trial or basic research study," she said.

Nadel, who has been studying cognition in Down syndrome for years as part of his overall research, said the work on the test battery is part of a larger national consortium that is rapidly becoming international.

"Our focus here at the UA – where Jamie really was the lead player – was in the development of this battery. Others are doing animal model work, clinical work and drug work. But the neuro-psychological test battery that is going to be the heart of any clinical trial is what we did. That's the contribution we made and will continue to make."

The battery is a set of computer-based tests that was designed primarily for adolescents. Different kinds of tests – memory tests, motor tests, attention tests – are targeted toward particular brain regions that are at risk with Down syndrome. The tests are meant to be portable so they can be done on a computer and are as free of language as possible.

"Tests take about two hours, which is key for a lot of these different studies because they need a set time," Edgin said.  "It's practical, which is a big thing for a lot of these studies. It's also one of the largest studies done in cognition on Down syndrome. We saw a large number of children across a wide range of variability."

Nadel said the project will expand to other areas of study. One is focusing on the disordered and fragmented sleep on cognitive performance in Down syndrome and what interventions might help those with Down syndrome improve their sleep.

They also are developing the battery for other age groups to look at longitudinal effects. "We're moving downward into younger children to find the earliest possible indicators, and upward toward adults with Down syndrome so that we can look at decline with dementia because a significant portion of people with Down syndrome end up developing Alzheimer's disease," Edgin said.

The Down Syndrome Research Group is recruiting children and adults with Down syndrome from age 7 to late adulthood. More information on this and other DSRG studies is available at 520-626-0244 or by e-mail at jedgin@email.arizona.edu.