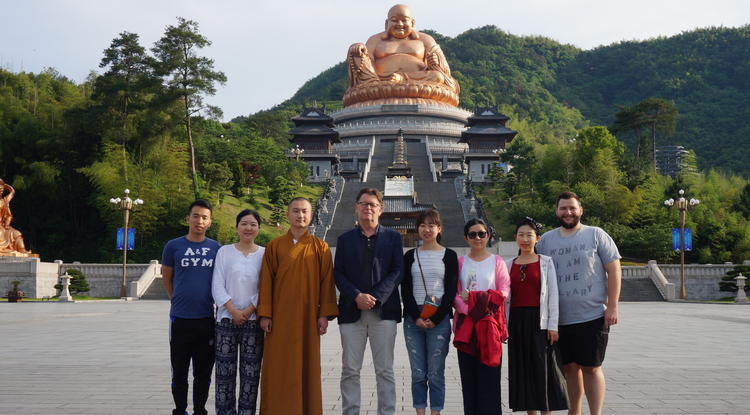 In front of the statue of Maitreya Buddha at Xuedou (Snow Pass) Monastery with the abbot, UA professor Albert Welter and UA graduate students

New grants have launched an in-depth study of East Asian Buddhism as one of the signature projects of the UA's Center for Buddhist Studies.
Eric Swedlund
,
UA College of Humanities
Nov. 27, 2017
Resources for the Media 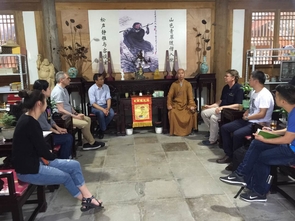 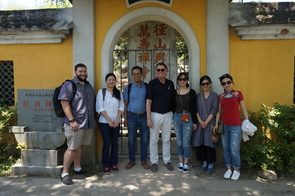 Aiming to chart the spread of Buddhism in China and across East Asia, University of Arizona researchers are examining distinct traditions that developed in the Hangzhou region.

Although Buddhism originated in ancient India, the tradition of Chan (Japanese, Zen) Buddhism that developed in Hangzhou from the 10th century became the basis for East Asian Buddhist practices that spread to and flourished in Japan and Korea.

Albert Welter, head of the Department of East Asian Studies, has long specialized in Buddhist figures and texts related to the Hangzhou region, but only in the last two years did he begin developing a research project that seeks to understand Hangzhou in a holistic sense as the foundation of East Asian Buddhism.

"My research has been related to Hangzhou for decades, but I never thought of myself focusing on the Hangzhou region," Welter says. "This project looks at the Hangzhou region as a second homeland for Buddhism subsequent to India. Usually the history of Buddhism is told from an Indian perspective with little emphasis on East Asian, but that was just the first phase. From an East Asian perspective, phase two begins when Buddhism recedes in India and is no longer active. At that point, Hangzhou comes into its own."

A signature research effort of the UA's new Center for Buddhist Studies, the Hangzhou Project aims to develop a new paradigm for the study of East Asian Buddhism, replacing an outdated focus presuming India as the center of the Buddhist world, with a regional focus on the expansion that started in China. Traditional historical and textual study will be augmented with digital humanities methodology, including GIS mapping and the creation of a "virtual Hangzhou" in collaboration with the UA's new Center for Digital Humanities.

Earlier, 19th-century European pioneers of Buddhist studies, following the model of Protestant Christianity, were mostly preoccupied with the founder of Buddhism and his original teachings and regarded later forms as corruptions of the original message.

However, Welter argues, by the 10th century Chinese Buddhists became boldly innovative, creating new forms of Buddhism unique to the East Asian context and the spread of those new forms became foundational for an East Asian Buddhism that was largely independent and only tangentially related to its Indian forebears. As the Hangzhou region, located on China's east coast at the southern terminus of the ancient Grand Canal, gained prominence among both religious pilgrims and trade merchants from Japan and Korea, Chinese teachings spread from the hub of the Hangzhou region.

"The current project aims to systematically reorient the study of East Asian Buddhism as an indigenous form, and not as part of an Indian trajectory," Welter says. "The Hangzhou region became a kind of 'homeland' for many Buddhists throughout the East Asian region who traced their lineages, doctrines and teachings directly to Hangzhou regional Buddhist institutions."

Zen, or Chan Buddhism as it is known in China, is the most prominent form of East Asian Buddhism and the most common form depicted in Western media. In the West, as well as in China, Zen Buddhism is attracting increasing attention, which creates an opportune time for a more in-depth study of Zen in both the historical and modern contexts.

"The proposal looks at the vertical aspect, the development of Buddhism historically, as well as the horizontal aspect, the regional spread," Welter says. "The Hangzhou region is traditionally the strongest region of Buddhism in China and it's returning to that place today."

Hangzhou, today the capital and most populous city of Zhejiang Province, is known for its West Lake, a UNESCO World Heritage Site. A prosperous city for the last millennium, Hangzhou first gained notoriety in the Western world through Marco Polo, who visited in the late 13th century and called it "without a doubt the finest and most splendid city in the world." It also hosted a G20 summit in 2016.

During the Mao era, from 1949 through 1976, traditional Buddhist culture in China was cast aside as socialism and secularism replaced religion in the culture, Welter says. The Great Proletarian Cultural Revolution that occurred from 1966 to 1976 was particularly brutal toward expressions of traditional Chinese culture, including Buddhism.

"Buddhism was virtually destroyed in China, both the physical monuments and the culture. Temples went defunct or were repurposed as factories or military installations, and for all intents and purposes Buddhism no longer existed in China in any real capacity," Welter says. "But in the last couple decades, there's been a tremendous revival of Buddhism and Buddhist culture, as China rediscovers and reinvents its past."

Last summer, Welter received a $28,500 International Research and Program Development, or IRPD, seed grant, co-funded by the UA's offices of Research, Discovery & Innovation and Global Initiatives, to launch the project.

In May, Welter and six graduate students in East Asian studies conducted a research trip to Hangzhou to enlist local support for the project and visit many of the region's important sites for initial observations and investigations. The idea of the project was "extremely well received," says Welter, who formed partnerships among the UA, Zhejiang and Jiliang universities in Hangzhou, and the Hangzhou Buddhist Academy. The triangulation is a model for how the IRPD grant can work.

The grants will fund three-week field research trips for six graduate students annually, each working on individual research projects that will be presented together at three planned conferences — two that will be held in Hangzhou and one at the UA. While in Hangzhou, students will participate in workshops/seminars featuring experts in Hangzhou Buddhist culture, many of whom will be drawn from universities and academies in the Hangzhou region. Graduate students in China also will participate in the project.

"This will create a new and enhanced model for graduate training. Our students and the Chinese partners' students will be working together, each doing individualized projects in the context of a greater whole," Welter says. "These thematic volumes of research that connect with everyone will demonstrate to people how they can develop projects in their own areas of expertise, and the synergy of the combined research will show a comprehensive picture. It's a transition to a team approach.

"The combined effort of many people can produce something I could never dream of. That's the model that this project and future Center for Buddhist Studies projects can offer down the road."