UA's Public Eye to the Stars

The Schulman Telescope is the largest in the country dedicated exclusively to public outreach. The instrument formally will be dedicated to the UA's Mt. Lemmon SkyCenter on April 28.
Daniel Stolte
,
University Communications
April 26, 2012
Resources for the Media
Extra Info:

Information about the SkyNights public programs can be found on the SkyCenter's website.

For images of the universe, visit Adam Block's astrophotography gallery. 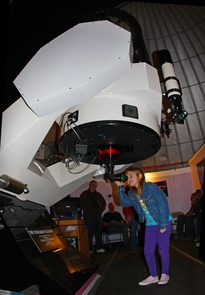 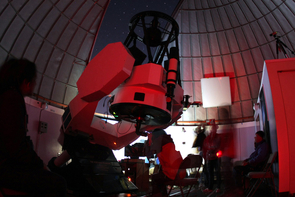 Bundled up against the chilly air on top of Mt. Lemmon, students use the Schulman Telescope for a night of observing planets, stars and galaxies. (Photo: Adam Block) 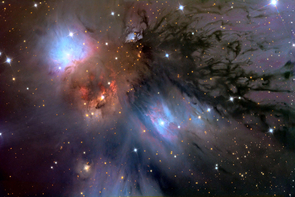 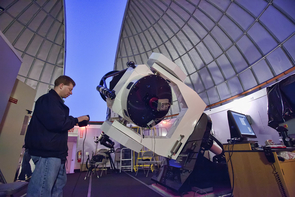 Adam Block adjusts the telescope to point to an object in the evening sky. (Photo: David Harvey)

Thanks to the very generous support of Joseph and Dixie Schulman of the Schulman Foundation, a 32-inch reflecting telescope will be dedicated at the University of Arizona's Mt. Lemmon SkyCenter on April 28.

The telescope is the largest telescope in the country used exclusively for education and public outreach and, in addition to its local functions, has been custom-designed for worldwide public access for astrophotography via the Internet.

"My wife, Dixie, and I saw a unique opportunity to enable the public to appreciate the wonders of the universe by providing access to a superb telescope on a first-class site that has long supported cutting edge science," said Schulman.

Weighing in at more than 5,000 pounds and standing 12 feet tall, the new 32-inch Schulman Telescope is safe and easy to use for public programs and delivers digital images of exceptional quality.

It is the centerpiece of an interactive campus located at the summit of Mount Lemmon, a unique "sky island" environment that provides visitors with an opportunity to experience nature and history by day and explore the universe by night.

The story of the Schulman Telescope began when Adam Block, a world-renowned astrophotographer who runs the SkyCenter's public outreach programs in astronomy, met Joseph Schulman in 2006 at a conference.

"Dr. Schulman was familiar with my work, and at the time I was actively looking to try and start an innovative public outreach program," Block said. "It turned out that our visions of public outreach agreed. An important aspect of his vision was a telescope that could be remotely accessed and controlled by members of the public across the globe."

To do so requires a telescope with the requisite precision and optical quality, along with a good location and Internet connection and technical specs allowing for complete remote control, Block said.

"If a single piece is not in place, you won't be able to do it. That is the most difficult part, to have all those pieces in place," he added.

With the additional designation of being one of the world's largest telescopes dedicated exclusively to public access and education, the telescope had to be specifically designed to meet those requirements.

"Hubble, for example, was designed to produce top-notch scientific data first, and pretty pictures second," Block said, "but our telescope was designed to do just that. Our mission is to inspire lay people, for example by taking visually compelling, full color images of astronomical objects."

The Schulman Telescope was designed to rigorous specifications provided by the UA, and also commercially constructed to high precision with computer controls enabling it to point to and track distant astronomical objects. Images are acquired with a large format charge-coupled device (CCD camera), the data from which can then be displayed locally or transmitted over the Internet to observers around the world.

The telescope features carbon fiber trusses that do not change with temperature and a mirror support system that keeps the mirror in shape regardless of its position. Telescope mirrors have to withstand the pull of gravity, as even the slightest distortion would ruin the image.

The Schulman Telescope has already proven its worth by capturing images of breathtaking beauty that reveal rarely seen details of objects, such as vast dust clouds, galaxies, stars and planets in the full range of visible wavelengths.

Many a night and countless hours that Block and members of the public have spent observing with the telescope and assembling data into images paid off when NASA selected several of them for its Astronomy Picture of the Day gallery.

"We are extremely grateful to the Schulmans for their tremendous support of science education and public outreach at the Mt. Lemmon SkyCenter," said Alan Strauss, the center's director.

"Most people never have an opportunity to look at astronomy targets through an observatory-class telescope," Strauss said.

"Our public astronomy programs allow us to share our science with the public and communicate astronomy and planetary sciences to adults, children, students, really anybody," he also said. "The Schulmans' gift was the seed that allowed the SkyCenter to grow."

Schulman said: "With the support of an outstanding department of astronomy at the UA and the participation of world-renowned astrophotographer Adam Block, the project seemed worthwhile, and we have now completed it after over five years of planning and execution."

Block said the SkyCenter offers "life-changing experiences" for members of the public, which have been possible because of the Schulmans' generosity.

"Because of their vision, we are able to share ours," Block said. "Community and worldwide access to a large telescope has now been realized through the regular SkyCenter public astronomy programs."

The combination of high altitude, dark skies and low atmospheric humidity all make the Schulman Telescope and the Mt. Lemmon SkyCenter, which is part of the UA's Steward Observatory, a premier facility for both the public and for professional astronomers.

Every night, the SkyCenter offers its SkyNights presentation. The five-hour program includes a light dinner. Participants are invited to come up the mountain in the early afternoon and look at the sky with star charts and binoculars. Once it gets dark, people get to look through the Schulman Telescope to see everything from planets to galaxies.

"Most of humanity has not had an opportunity to see things as clearly as we are able to show them," Block said. "For example, you can see the spiral arms of the whirlpool galaxy, which is 30 million light years away, with your eyes when you look through the telescope."

"I'm very happy with it," he added. "And those who know me know I'm a perfectionist."