The insects known as aphids can make their own essential nutrients called carotenoids, which are the building blocks for molecules crucial for vision, healthy skin, bone growth and other key physiological functions.
Mari N. Jensen
,
College of Science
April 29, 2010
Resources for the Media 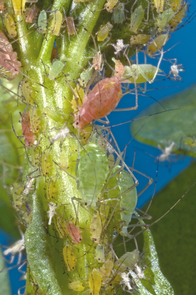 Red and green aphids are grouped together. The large red aphid toward the top of the photo is giving birth. (Copyright 2010, Charles Hedgcock R.B.P.)

The insects known as aphids can make their own essential nutrients called carotenoids, according to new research from University of Arizona scientists.

No other animals are known to make the potent antioxidants. Until now scientists thought the only way animals could obtain the orangey-red compounds was from their diet.

"Once you start realizing how widespread carotenoids are, you realize that they're everywhere in life," said Nancy Moran, a UA Regents' Professor of ecology and evolutionary biology and leader of the team that overturned the conventional wisdom.

Carotenoids are building blocks for molecules crucial for vision, healthy skin, bone growth and other key physiological functions. Beta-carotene, the pigment that makes carrots orange, is the building block for Vitamin A.

"The yellow color in egg yolks, the pink in shrimp and salmon, the pink in flamingos, tomatoes, carrots, peppers, Mexican poppies, marigolds – the yellow, orange and red are all carotenoids," Moran said.

She and her co-author, Tyler Jarvik, also figured out how the aphids they studied, known as pea aphids, acquired the ability to make carotenoids.

"What happened is a fungal gene got into an aphid and was copied," Moran said. She added that, although gene transfers between microorganisms are common, finding a functional fungus gene as part of an animal's DNA is a first.

"Animals have a lot of requirements that reflect ancestral gene loss. This is why we require so many amino acids and vitamins in the diet," she said. "Until now it has been thought that there is simply no way to regain these lost capabilities. But this case in aphids shows it is indeed possible to acquire the capacity to make needed compounds.

"Possibly this will be an extraordinarily rare case. But so far in genomic studies, a single initial case usually turns out to be only an example of something more widespread."

She and Jarvik, a research specialist in UA's department of chemistry and biochemistry, report their discovery in the paper, "Lateral Transfer of Genes from Fungi Underlies Carotenoid Production in Aphids," scheduled for the April 30 issue of the journal Science. The National Science Foundation funded the research.

A lucky accident in the lab plus the recent sequencing of the pea aphid genome made the discovery possible, Moran said.

Pea aphids, known to scientists as Acyrthosiphon pisum, are either red or green. Aphids are clonal – the mothers give birth to daughters that are genetically identical to their mothers. So when an aphid in the Moran lab's red 5A strain began giving birth to yellowish-green babies, Moran and her colleagues knew they were looking at the results of a mutation.

"We named it 5AY for yellowish," she said. "That yellowish mutant happened in 2007. We just kept the strain as a sort of pet in the lab. I figured that one day we'd figure out how that happened."

Symbiotic bacteria live within aphids in specialized cells. The bacteria, which are passed from mother to babies, supply the insects with crucial nutrition. If their bacteria die, the aphids die.

Moran, who has been studying the pea aphid-bacteria system for decades, already knew the three main species of symbiotic bacteria did not make carotenoids.

She also was pretty sure the aphids didn't get their carotenoids from their diet. Aphids eat by sucking the phloem sap from plants, but the sap is carotenoid-poor. In addition, the carotenoids in the aphids were different from those usually found in plants.

In late 2009, after the complete DNA sequence of the pea aphid became available to researchers, she decided to search it for carotenoid genes.

All organisms use the same biosynthetic pathway to make carotenoids, which made searching for carotenoid genes straightforward, she said.

Lucky for Moran, the researchers who sequenced the pea aphid genome used red aphids, which have an extra copy of the carotenoid gene, making the gene causing the red color easier to find.

Next, she figured out whether the genes were from pea aphid DNA or from uncommon symbiotic bacteria or were just contamination from fungi in the sample.

In addition, tracing the lineages of the red, green and yellow strains of aphids showed the colors had a Mendelian inheritance pattern, indicating the DNA that coded for red was part of the aphid's DNA.

The final piece of the puzzle was figuring out where the genes came from. The particular sequence of aphid DNA that coded for carotenoids differed from bacterial carotenoid genes and matched those from some fungi.

Moran said a long-term association between aphids and pathogenic fungi could make such a gene transfer possible.

The discovery illustrates "the interweaving of organisms and their genomes over time and their merging in different ways," she said. "The distinctness of different genomes and organisms and lineages is much less than we thought."