Five engineering students are testing their senior design project in a simulated Martian environment in the Utah desert.
Pete Brown
,
College of Engineering
April 16, 2012
Resources for the Media
Extra Info: 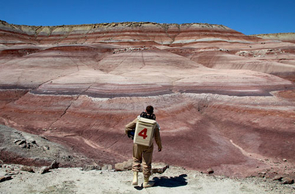 A team of University of Arizona engineering seniors is on a two-week simulated mission to Mars to test a camera they are designing for NASA.

The students' senior project, part of the UA College of Engineering senior capstone program, is to develop the NASA-sponsored remote imaging system acquisition, or RISA.

New mission requirements mean that future NASA space vehicles will have less room, which is why NASA specified that RISA should incorporate the abilities of multiple existing cameras into a single system.

This means that RISA will do double duty as a camera for rover-based planetary surface exploration, and for onboard use in NASA space vehicles. The project is sponsored by NASA's Johnson Space Center and is currently in its sixth year of development.

The student team, aka Crew 117, is currently holed up in the Mars Desert Research Station, a simulated Mars habitat managed by the Mars Society near Hanksville, Utah.

During the two-week mission, Crew 117 is simulating living on Mars, including treating the outside environment as the space environment and using simulated space suits, known as "sim suits," for all extravehicular activities, or EVAs.

The crew is living in a two-story habitat, known as the "hab," from where they have access to a greenhouse, a telescope and observatory, and all-terrain vehicles for EVAs. "The surrounding area is very remote, so the complete isolation aids in creating the simulated environment," said Kyle Stephens, crew commander and optical engineering senior.

This is Stephens' second simulated mission to Mars. In December 2010, he was a member of Crew 96, an engineering team that prepared the Mars Desert Research Station, or MDRS, for the 2011 field season.

Seasons end in May, which allows time for up to 10 missions before the desert heat sets in. Stephens also leads the RISA senior design project back on Earth at the UA College of Engineering.

Reporting from the hab recently, Stephens said: "So far we have been exploring the area and using a small remote-control rover ... in addition to performing some EVAs." The crew built the camera as a wireless system, said Stephens, so the camera could be used as a tool for robotic navigation.

During their mission, which is supported by a UA/NASA Space Grant, the crew also wants to prove that the camera can be used for everyday operational duties such as determining water tank levels, monitoring equipment operation, checking plant health in the greenhouse and monitoring crew activities.

After the crew returns on April 22, results from these tests will be incorporated into RISA ready for the senior design team to present their project to judges and the public at Engineering Design Day 2012, which will be held May 1 in Bear Down Gym on the UA campus.

Crew 117 is confident that some extreme testing will help their camera design to meet NASA mission requirements. "These new NASA mission objectives require the final prototype to be radiation hardened, multispectral, completely wireless, and take both high-quality video and still images," Stephens said.

The RISA project still has some distance to go before it is ready for operation. "While we focused on developing key components like the optical design and the wireless communication system," Stephens said, "more work will need to be done to create a flight-certified system."

"Finishing the project was not in the scope of our year," added Stephens, "but we have compiled a great amount of information and hardware that will help future teams move forward with the project."

The crew settled in and got to work quickly, and didn't experience any reality-TV-style confrontations, although mission XO Parker Owan was looking forward to a little more physical freedom. "I think being unable to do outdoor activities without going through a lengthy suit-up process is the worst part because I love being outside all the time," Owan said. "Even then, you're still enclosed in a stifling suit that doesn't allow for a whole lot of airflow. I think when it is all done, going outside will be the thing I look forward to most."

Not every activity aboard the hab is mission critical, and the crew has some down time. They are helping with a study to determine what kind of food is most suited to interplanetary travel. "With six people in a small hab," said crew engineer Sam Martin, "freeze-dried chili is a bad idea."

There is always gardening and maintenance to be done, Stephens said, "but there's no escape from homework."