In an investigation of Pima County couples, UA undergraduate researcher Ryan D. Davidson and her colleagues found that despite imposed mediation, violence often did not end between divorced couples.
La Monica Everett-Haynes
,
University Communications
Dec. 1, 2009
Resources for the Media 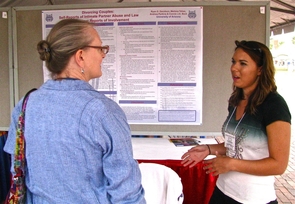 A great deal of research indicates that mediation is helpful for divorcing couples, but a project underway at the University of Arizona indicates that for certain couples, more supervision is necessary after the mediation process has ended.

Information collected documenting telephone calls to law enforcement agencies effectively tracks a record of domestic violence prior to and after divorce, which is an atypical approach.

"The unique piece about this project is that we have the police data for these couples, said Beck, a UA associate professor of psychology. She noted that to protect the confidentiality of couples, the data is maintained and analyzed using research identification numbers.

"It's a double check on what is being reported by the parents in mediation and signifies a level of severity when people are willing to call the police or shieff to help with family problems or when people are arrested," Beck said.

Overall, the project involves more than 1,000 couples who were participating in mandatory custody and parenting time mediation, or visitation, as a result of going through divorce proceedings. All couples also were in conflict about the custody of their children.

It is the first known study of mediated divorcing couples that involves extensive longitudinal data from law enforcement, Beck said. For some couples, the team has 10 or more years of law enforcement data, "essentially from the beginning of the couple's relationship," Beck said.

"Domestic violence is not something a lot of people choose to talk about. It is so underrepresented, said Davidson, a UA psychology junior and Honors College student.

She noted that 98 percent of individuals in the study reported some form of psychological abuse or coercive control in the previous year. "I think the biggest thing and what is important is that a lot of people don't realize these things."

The team's investigation is part of a larger project headed by Beck's lab, which has for most of the last decade studied ways in which legal process creates stress for victims and clients attempting to resolve disputes.

The current project, however, focuses primarily on forms of abuse between couples, including psychological abuse, coercive control, physical violence, sexual assault, sexual intimidation and threats of and escalated physical violence.

The team's work and preliminary findings counter the prevailing belief that if people simply walk away from abusive partnerships, the abuse will end.

"Even when the marriage relationship is over there remains serious conflict and violence between many couples," Davidson said. "These are things that must be accounted for after a couple separates."

The team chose to seek out the law enforcement data after noting a pattern in Superior Court records related to divorcing couples. Often, protection and custody orders were filed along with statements indicating fear of safety on the part of one of the divorcing adults, or their children, Tehee said.

"Mediation is about coming together on mutual terms and trying to work them out," said Tehee, who is pursuing a dual doctorate degree in psychology and law.

"But when there is a lot of intimidation and coercion, it's going to be very difficult to come up with a custody arrangement," she said. "And part of what we're seeing are couples who are using a lot of court and police time and resources."

"The calls are a lot different than when people simply go to court," she said. "Every call that is made to police doesn't necessarily result in a court record, but there tends to be a lot more information in those calls."

Tehee noted that the team also will present their findings during the American Psychology-Law Society's annual meeting, which will be held in March in Vancouver, B.C. The team also has plans to prepare their findings for future publication.

Preliminary findings also indicate that if domestic violence occurred prior to divorce, it tends to continue after divorce and that violence typically accelerates within the first three to 12 months after separation.

"We think this has to do with exchanging the children," Beck said, emphasizing that additional research is necessary to solidify the findings.

"These two people have to remain in contact because they have children, but they do not get along," she added. "This is very new, and this is the only domestic violence database with police data that exists, but it is one jurisdiction."

Yet the research has been well received.

Beck and her team has been funded by a range of agencies, including the Arizona Psychological Association and the National Institute of Justice to ensure the continuation of the investigations.

Also, the research has resulted in numerous articles. Beck has co-authored a forthcoming article with colleague Chitra Raghavan, an assistant professor at John Jay College, titled, "Intimate Partner Abuse Screening in Custody Mediation: The Importance of Assessing Coercive Control." The article has been accepted for publication by Family Court Review, and is expected to run in the journal in July 2010.

Despite the study being preliminary, the early findings carry clear implications for law enforcement agencies, mediators, judges, psychologists and researchers.

"All the way from the chief of police and the sheriff down to the mediation center and the judges – they have all been incredibly supportive of this research," Beck said.

She noted that one implication for mediators is the need to screen couples "very, very carefully" for domestic violence. She also noted that while mediators in Pima County have levels of screening, not all mediators are careful in the process.

"And I think we need to think very seriously about supervised exchanges and limits on contacts between the parents so that there is less violence happening," Beck said.

In the team's research, Beck added: "If we can help point out possible places where changes can be made in the process so that it protects children and victims, everybody wins."