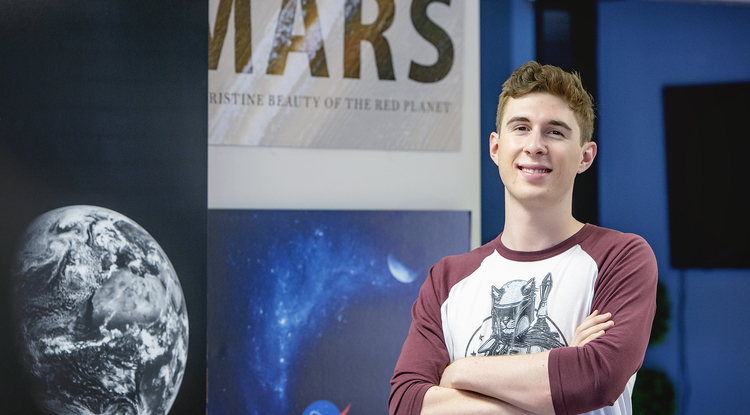 Scientists from around the world are working on the NASA Curiosity rover mission. What makes the UA's Mars Science Laboratory team different is one of its most unique members, undergraduate student Gordon Downs.
Pam Scott
,
University Communications
July 17, 2018
Resources for the Media

An undergraduate student from the University of Arizona is part of a team of researchers from around the world working on the NASA Curiosity rover mission.

Gordon Downs is the only undergraduate at the UA assigned by the Mars Science Laboratory science team as a collaborator. Researchers are working to determine if Mars ever was habitable, or ever exhibited an environment that could have been capable of supporting microbial life. In addition to Downs, eight researchers and graduate students from UA are contributing to the project.

Downs, who is double majoring in mathematics and electrical and computer engineering, has been working with a team at the UA for about a year, developing new ways to analyze data from the CheMin instrument on Curiosity. The CheMin is feeding back to Earth X-ray diffraction data, which offers clues to researchers working to determine the chemistry and mineralogy, or crystalline structure, of samples from Mars. The chemistry and mineralogy of Martian rocks and soils help scientists determine the geological history of the planet. Specific minerals discovered with CheMin formed from water, and some of these minerals suggest ancient Martian lakes could have sustained life.

“The development of our analytical software has been building and building, and now we have a working product,” Downs said. “Now that we have something usable to analyze the data, I was added as a team member to help analyze the data as it comes down from the rover.”

The new analytical method created by the UA team, with the help of recent doctoral graduate Cherie Achilles, will assist with more critically identifying the materials on Mars, bringing the mission a step closer to answering the question of whether the ancient Martian surface would have been habitable to microbial life.

“There are a lot of materials on Mars that we would like to quantify,” Downs said. "When it is done, our software will tell you analytically the components of the amorphous materials in the crust on Mars. It is estimated to vary between 15 and 30 percent. While we are doing this analysis for the materials found on Mars, the analysis will also be very applicable to the soils on Earth, which tend to be about 5 percent amorphous.”  Amorphous materials are those without a crystalline structure identifiable by X-ray diffraction.

The Curiosity, or Mars Science Laboratory rover, is a robot about the size of a car that is roaming Gale Crater on Mars, investigating ancient lake deposits that the mission determined once had conditions capable of supporting life. It launched in 2011 from Cape Canaveral, Florida, and Downs attended the event with his father while he was in grade school.

“There was this moment when my father, brother and I were watching the movie ‘The Martian’ in a theater and we were watching the Mars rover launch in the movie,” Downs said. “My dad nudged my brother and me and said that was the launch we went to. At that moment, it really hit me how big all of this is. It’s a testament to my education at the University of Arizona that an undergrad can have the opportunity to contribute to such significant science. I feel really lucky!”

Downs has earned this opportunity along with two scholarships, including a Thomas R. Brown Distinguished Scholarship for UA incoming National Scholar freshmen and a Murphey Foundation Scholarship.