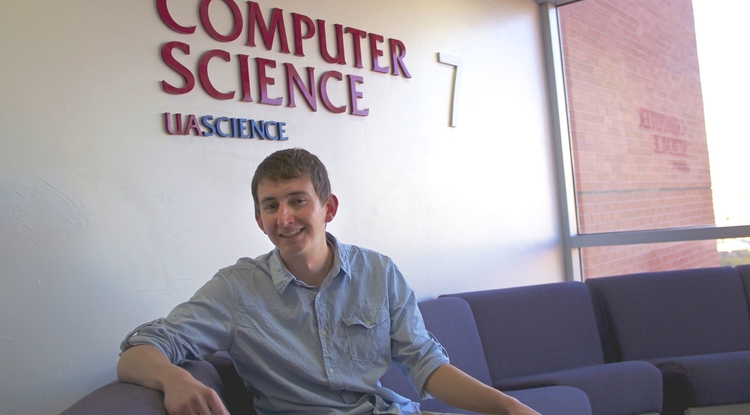 Daniel Fried is the second student from the UA to receive the Churchill award. The first Churchill Scholar from the UA was Diane M. Thomson, selected for the 1994-1995 year to study environment and development. (Photo credit: Beatriz Verdugo/UANews)

Daniel Fried, a UA senior in the Honors College, is one of 14 Churchill Scholars selected for the 2014-2015 academic year.
University Communications
Jan. 27, 2014
Resources for the Media
Extra Info:

The UA's Office of Nationally Competitive Scholarships facilitates the application process for UA students applying for national fellowships and scholarships. To learn more, contact Emily Kotay, scholarship adviser for the office, at 520-621-0162 or emkotay@email.arizona.edu.

A University of Arizona Honors College student is one of 14 students in the U.S. selected as a 2014-2015 Churchill Scholar by the Winston Churchill Foundation of the United States, which provides funding for one year of graduate school in the United Kingdom.

The awards range from $50,000 to $60,000 – depending on the student's field of study – for tuition and fees, a living allowance and transportation.

Daniel Fried, a Tucson native, has three majors: computer science, information science and technology and mathematics. He plans to use the scholarship to study at the University of Cambridge, where he will pursue a Master of Philosophy in advanced computer science.

Fried is the second student from the UA to receive the prestigious award. The first Churchill Scholar from the UA was Diane M. Thomson, selected for the 1994-1995 year to study environment and development.

Fried, a highly accomplished student, entered the UA as a Flinn Scholar, selected for his academic and personal achievements. He also was named a 2013 Goldwater Scholar, chosen for his strong potential to pursue a research career in the fields of science, technology, engineering or mathematics.

In addition to conducting research at the UA, Fried has studied in Germany and Japan. His main interest is in artificial intelligence, focusing on computational linguistics and machine learning.

"Cambridge is particularly strong in my main research interest: computational semantics, or automatically producing representations of the meaning of language," Fried said. "The Churchill Scholarship will give me the chance to investigate this area further and prepare for future research in natural language processing and machine learning."

While at the UA, Fried has served as a teaching assistant and as an ambassador in the College of Science.

"Daniel is a wonderful representative of the University of Arizona," said Karna Walter, assistant dean for student engagement in the UA Honors College. "He will make the most of being part of the Churchill Scholars and Cambridge communities.”

Ultimately, Fried is interested in creating computer systems that not only store and retrieve information, but also understand the information and process it.

Fried said he is grateful to UA faculty members Paul Cohen, Stephen Kobourov and Kobus Barnard; professor Kevin Duh at the NARA Institute of Science and Technology in Japan; and also Felix Wolf and Ali Jannesari at Germany's RWTH Aachen in Germany "for giving me such great research opportunities and supporting and advising me throughout our projects."

After finishing his year at Cambridge, Fried plans to complete doctoral studies in computer science, and then pursue a career in research.

"Recently, huge amounts of knowledge have become available electronically – for example, through scanned books and the billions of Web pages on the Internet," Fried said.

"If we can develop methods for extracting structured meaning from these sources of data," he said, "we should be able to create better artificial intelligence systems to help us answer questions, make plans and reason about the world."