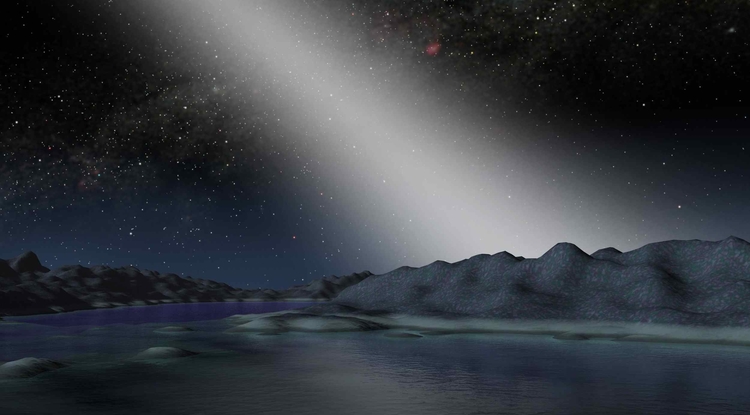 An artist's impression of exo-zodiacal light viewed on an alien world (Image: NASA/JPL-Caltech)

By studying dust in the habitable zones of nearby stars, the HOSTS Survey — led by UA astronomers and performed with Arizona telescopes — is helping to determine how big future telescopes should be, which stars are likely candidates for harboring Earth-like planets and what the average star system looks like.
Emily Walla
,
NASA Space Grant Intern, University Communications
March 28, 2018
Resources for the Media 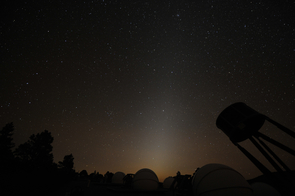 Sometimes mistaken for light pollution, zodiacal light is sunlight that is reflected by zodiacal dust. It is most visible several hours after sunset on dark, cloudless nights surrounding the spring and fall equinoxes, when the Earth's equator is aligned with the plane of the solar system. (Image: Malcol) 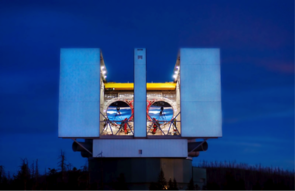 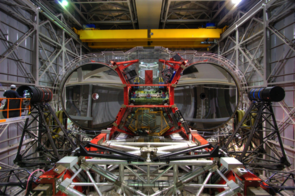 The LBTI is the most precise interferometer to date. (Image: Phil Hinz/LBTI)

That is the question the Hunt for Observable Signatures of Terrestrial Systems, or HOSTS, Survey was tasked with answering, albeit on a cosmic scale. Using the Large Binocular Telescope Interferometer, or LBTI, in Arizona, the HOSTS Survey determines the brightness and density of warm dust floating in nearby stars' habitable zones, where liquid water could exist on the surface of a planet.

This research will contribute to a once-per-decade report on the field of astrophysics, produced by the National Academies, that NASA uses to help chart a course for future missions, some of which could continue the search for planets around other stars, known as exoplanets. But before telescopes for prospective exoplanet-hunting missions can be designed, astronomers must know if there is a fundamental limit to their ability to see a tiny, dim planet next to a bright star when the system is shrouded in dust.

"Our result is that there is no fundamental problem," said Steve Ertel of the University of Arizona's Steward Observatory, instrument scientist for the Large Binocular Telescope Interferometer and lead author on the paper, "The HOSTS Survey – Exo-Zodiacal Dust Measurements for 30 Stars," which is published in the in the Astronomical Journal. "Now it is a technical challenge."

A potential mission to search for terrestrial planets probably would include a space-based telescope, and the HOSTS Survey will help determine its size.

"The more dust there is, the bigger the telescope has to be to image a planet," Ertel said. "It is important to know what telescope size is required, so the costs can be minimized."

The dust that orbits in the plane of our solar system is known as "zodiacal dust." The HOSTS Survey has determined that the typical level of zodiacal dust around other stars — called "exo-zodiacal dust" — is less than 15 times the amount found in our own solar system's habitable zone. Stars with more than that amount of dust make poor targets for future exoplanet imaging missions, as planets would be difficult to see through the haze. One such star with a prominent dust disk, called Epsilon Eridani, is one of the 10 nearest stars investigated by the HOSTS Survey.

"It is very nearby," Ertel said. "It’s a star very similar to our sun. It would be a very nice target to look at, but we figured out that it would not be a good idea. You would not be able to see an Earth-like planet around it."

If dust and debris make finding rocky worlds challenging, then why search for planets in dusty systems?

"There is dust in our own solar system," said Philip Hinz, the lead for the HOSTS Survey team and associate professor of astronomy at the UA. "We want to characterize stars that are similar to our own solar system, because that's our best guess as to what other planetary systems might have life."

The pattern of dust distribution around a host star also can tell astronomers something about the potential planets in a star system. Some stars have wide, continuous disks that fill the whole system. This is considered a standard model, as dust is formed during asteroid collisions far from the star and then spirals inward toward the star so that it is evenly distributed throughout the system.

"This is something that we expected to see, but we also saw some surprises," Ertel said.

Take Vega, one of the brightest stars in the night sky. For more than 30 years, astronomers have known that Vega has a massive belt of cold dust far from the star, analogous to our solar system's Kuiper Belt. The star also has a disk of hot dust very close to it.

"We were thinking that Vega must have dust in the habitable zone as well, because it has dust very close and dust farther away," Ertel said. "But we looked at Vega's habitable zone and we didn't find anything."

Vega's habitable zone is devoid of detectable dust, which could indicate that the system has planets that prevent dust from collecting there. Planets have not yet been detected around Vega, but current observations are not even sensitive enough to detect a planet as large as Jupiter near the star, let alone Earth-like planets.

"This could be an indication of a planet we cannot see," Ertel said. "It could be a massive planet outside the habitable zone, or it could be several Earth-mass planets."

Other stars had different dust distributions: nothing far away or very close, but huge amounts of bright, warm dust in their habitable zones. If a star does not have a Kuiper Belt analogue producing dust, but it still has a ring of warm dust, there must be another mechanism at play in the system.

"There might be giant planets like Jupiter and Saturn in that system, but that system's asteroid belt has a lot of mass to it, so you're getting a lot of collisions that make large amounts of dust," Hinz said.

Studying these dust disks provides astronomers with more pieces to the puzzle of planetary architecture. While past studies have looked for planets very close to, and very far away from, stars to determine where planets are typically located in star systems, the HOSTS Survey is determining how dust and asteroid belts appear in the average star system.

"The survey is ongoing, so we have more questions than answers," Hinz said. "We are in the early days for trying to figure out how it all fits together."

Exo-zodiacal dust has been warmed to room temperature by its host star, so it glows when viewed in infrared wavelengths — that is, in infrared light, emitted by heated objects. However, at those wavelengths, stars glow 10,000 times brighter than the dust. To see how much dust was swirling around their chosen 30 stars, the HOSTS Survey detected the dust disks using a technique called "Bracewell nulling interferometry," after Ronald Bracewell, the astronomer who first suggested the method.

The Large Binocular Telescope, or LBT, has the unique capability to perform this interferometry, as it is designed so that its twin telescopes can each detect light waves that are perfectly out of phase with each other. When waves are out of phase, they cancel each other out, causing their peaks and troughs to flatten.

"The result is that you cancel out the light from the star," Hinz said.

A similar technique was introduced in 1998, using the Multiple Mirror Telescope on Arizona's Mount Hopkins.

Achieving this cancellation requires that the LBT be adaptable. After light bounces off the telescope's 8-meter primary mirrors, it reflects off the secondary mirrors and into detectors. The secondary mirrors are deformable so that they can correct for the distortions of light caused by ripples in the atmosphere. In order for the interferometry to work, these corrections must be accurate to one one-hundredth of the width of a human hair.

The LBTI is funded by NASA's Exoplanet Exploration Program office and managed by the agency's Jet Propulsion Laboratory in Pasadena, California. JPL is a division of Caltech. The LBTI is 10 times more sensitive than the previous telescope capable of detecting exo-zodiacal dust, the Keck Interferometer Nuller, which completed its observations of exo-zodiacal dust in 2011. To learn more about the Keck Interferometer, visit science.nasa.gov/missions/keck.

The LBT is an international collaboration among institutions in the U.S., Italy and Germany, and it is managed and headquartered at the UA.