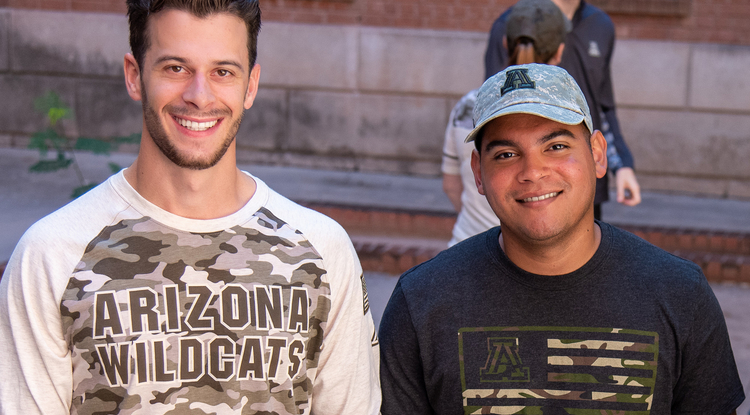 Operation Hat Trick, a national nonprofit dedicated to supporting wounded veterans, has again named the University of Arizona the winner of its Excellence in Service Award.
Andy Ober
,
University Communications
May 26, 2020
Resources for the Media

For the second straight year, the University of Arizona has earned the Excellence in Service Award from Operation Hat Trick, a nonprofit organization dedicated to supporting wounded U.S. combat veterans. The university was recognized for its efforts to support military service members and veterans through the sale of hats, shirts and other gear featuring military-style designs.

In honor of that effort, Operation Hat Trick has donated $12,000 to the Tucson Fisher House on behalf of the university. The Fisher House Foundation provides homes across the country, where the families of military members and veterans can stay free of charge while a loved one is in the hospital.

"We are excited to be honored again by OHT for our efforts around supporting our local military and veteran communities," said Alixe Holcomb, University of Arizona director of trademarks and licensing. "We're thrilled to be able to donate $12,000 to the Fisher House on the campus of the Tucson VA and look forward to our continued partnership. Being able to make such a meaningful impact in our community through the sales of licensed Arizona merchandise is so rewarding."

Holcomb says the university sold more than $100,000 in Operation Hat Trick merchandise since November. The effort included a photo shoot with student veterans to promote the products. Royalties from those sales went to Operation Hat Trick, which distributes the money to charities on behalf of the participating schools.

Dot Sheehan, Operation Hat Trick president, presented the award via videoconference on May 14.

"Our partners at Arizona have continually shown the kind of commitment and devotion to our veterans we're hoping to inspire nationwide," Sheehan said. "Raising funds is a critical part of meeting their needs, but equally important is raising awareness of veterans' struggles so we never forget our obligation to help them overcome their injuries and enjoy full lives."

Sheehan founded Operation Hat Trick in New Hampshire in 2008, and launched in nationally in 2012. The organization's mission is to support the recovery of wounded service members and veterans through merchandise sales.