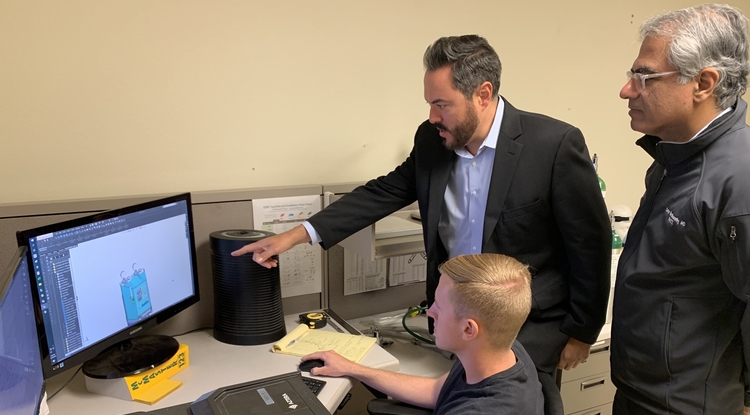 Researchers at the University of Arizona College of Medicine – Tucson have invented a new respiratory-assist device that provides fast, safe relief to those who experience difficulty breathing.
Paul Tumarkin
,
Tech Launch Arizona
April 1, 2020
Resources for the Media
Extra Info:

Resources for media, including photos and videos, available here.

One of the major complications of COVID-19 is that it causes inflammation in the respiratory tract and lungs that can lead to life-threatening pneumonia. In such cases, the fast and safe application of a respiratory-assist device can make the difference between life and death.

Researchers at the University of Arizona College of Medicine – Tucson have invented a new RAD that provides fast, safe relief to those who experience difficulty breathing.

Dr. Sairam Parthasarathy, professor of medicine and chief of the UArizona Division of Pulmonary, Allergy, Critical Care and Sleep Medicine, and Dr. Marvin Slepian, Regents Professor of medicine and director of the UArizona Center for Accelerated Biomedical Innovation, created the new device: a small-scale, low-pressure heliox rebreathing system that simultaneously removes carbon dioxide while appropriately adjusting for humidity as it recirculates gases in a closed system.

Heliox systems work by mixing helium and oxygen – a combination that has a lower density than the normal air we breathe – allowing the gas to flow through the respiratory airways with less resistance and lowering the amount of work needed for breathing.

Parthasarathy said the team originally developed the RAD as an at-home device for asthma and chronic obstructive pulmonary disease patients.

"Then COVID hit," he said, "and we saw that we could have a huge impact if we could make this available quickly to clinicians and first responders."

"Institutions around the world are working around the clock  to respond to the current crisis," said Doug Hockstad, assistant vice president of Tech Launch Arizona, the university's commercialization unit. "We've been working with this team for several months, and are thrilled that they've been able to see the current need and aggressively pivot to supply this solution at such an urgent time."

Along with adjusting the mix of gases and moisture for maximum comfort, the new device also works at a lower pressure, adding to patient comfort. While RAD systems usually function at a pressure of about 4 centimeters of water, this system functions at between zero and 2 centimeters of water – almost the same pressure as the normal air we breathe in a room.

"Most systems in use today are high-pressure and high-flow," Parthasarathy said. "The advantage with our system is that people can comfortably wear it without feeling like air is being forced into them; it won't make them feel claustrophobic."

In addition to being more comfortable and effective for patients to use, the new technology also provides a safer alternative for mitigating infection among health care workers. When first responders are called to a patient's home, they potentially are exposed to the virus through the coughs, sneezes and fluids of sick patients.

"By having a closed-circuit system with this kind of mask that covers the nose and mouth, first responders can give people assistance immediately on site, and do so with less chance of infection," Parthasarathy said.

"I applaud the members of this team for reimagining their existing technologies in a way that helps address the critical needs of our community during this unprecedented health crisis," Robbins said. "I am incredibly proud of the innovative thinking and tireless dedication of our researchers who have immediately responded to address this most-pressing challenge."

Manny Teran, a Tucson entrepreneur, started a new company – SaiOx, named in honor of Sairam "Sai" Parthasarathy. It has licensed the intellectual property for the RAD invention, which will be called Hespiro, from the university.

"The beauty of Hespiro is in its elegance and simplicity. We can build it quickly because of the availability of off-the-shelf parts, with some customization," said Teran, CEO of SaiOx.

Speed will be the key to maximizing impact, and the company already is moving quickly to get expedited U.S. Food and Drug Administration approval, as well as to form agreements with local manufacturers to produce the devices.

"In January, we were going to have a very elegant tool for COPD," Teran said. "Now we're shifting into high gear to provide a very functional tool for front-line clinicians."

"It's been a very smooth operation and I've been happy to work with Sai, as well as everyone on the TLA team," Teran said.

"One of the really exciting things about this is that the businesspeople stepping up to help with this project are all from outside the University of Arizona," Norman-Powers said. "They're community members who are jumping in to work with faculty inventors. That's fantastic."