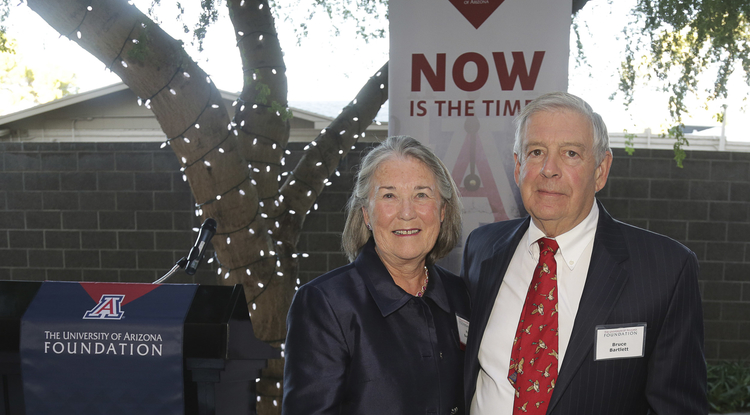 Patricia and Bruce Bartlett's $10 million gift will establish the Bartlett Labs, the goal of which is to unite the international research community in advancing understanding of issues that impact learning and attention challenges for undergraduate students, and to ensure Arizona students benefit from the resulting research.

The 360 Initiative is intended to meet students' financial, emotional and academic needs. Donors have already made $21 million in gifts for the 360 Initiative.
University of Arizona Foundation
Nov. 1, 2019
Resources for the Media
Extra Info:

Learn more about the 360 Initiative at giving.arizona.edu.

Learn how the university is improving how students live, work and study with the Student Success District.

Read about the SALT Center's innovative approach to supporting students with learning and attention challenges. 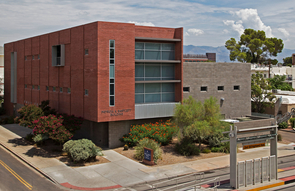 The Bartletts' gift is earmarked for several purposes within the Strategic Alternative Learning Techniques Center, including scholarships for program fees and mental health services.

The University of Arizona has launched the 360 Initiative fundraising campaign, which seeks to raise at least $50 million by this time next year to remove obstacles to students' success, enrich their experiences and prepare them to pursue meaningful careers.

In addition to enhancing services such as tutoring and counseling, the 360 Initiative will help students cover the full cost of attendance. The university's Office of Scholarships and Financial Aid estimates that tuition makes up 42% of the cost of attendance – $30,500 for an academic year – for incoming in-state undergraduates who live on campus.

The campaign, announced today, is tied to the university's strategic plan, which includes a set of initiatives devoted to student success. The vision for the campaign is to combine institutional and private resources to provide 360 degrees of support. Donors have already given a total of $21 million for the 360 Initiative.

The announcement follows the creation of the Pell Pledge Grant, a commitment from the university that all Arizona-resident freshmen who are eligible for federal Pell grants will have the full cost of their tuition covered for four years, starting with the fall 2020 semester.

"Everyone at the University of Arizona is committed to our students’ success, and in order to prepare every student with the skill set and mindset they need to lead in the Fourth Industrial Revolution, we will need the partnership of our incredibly generous donors united around this vision," said UArizona President Robert C. Robbins. "Our supporters are an amazing part of this community and I look forward to working with them through this new initiative."

Supporters gave $334.6 million to the university in the last fiscal year, breaking the giving record set the previous year. Many gifts went to scholarships and the Student Success District, a project now underway that will create a centralized hub for academic, wellness and retention services in the heart of the main campus. The Student Success District is scheduled for completion in 2021.

Two recent gifts illustrate the potential for private donors to partner with the university to better address students' financial, academic and emotional needs, said John-Paul Roczniak, vice president of development and chief development officer for the university and president and CEO of the University of Arizona Foundation.

The gifts have been made by Patricia and Bruce Bartlett and the Craig H. Neilsen Foundation.

The Bartletts recently built on their history of supporting student programs by making a $10 million gift, $8 million of which went to the Strategic Alternative Learning Techniques Center. The remainder is split between recruitment scholarships and Arizona Health Sciences, where it will be used to support medical research into issues affecting learning.

The Bartletts are the SALT Center's most generous donors, said Director Gabrielle Miller. This gift is earmarked for several purposes within SALT, including scholarships for program fees and mental health services. It also establishes a new multidisciplinary research effort that will be known as Bartlett Labs.

A primary goal of Bartlett Labs is to unite the international research community in advancing understanding of issues that impact learning and attention challenges for undergraduate students. Another is to ensure Arizona students benefit from the resulting research.

"We don't know of another major university that's doing anything like this. It's a transformational gift, and that's not an overstatement," Miller said.

Patricia Bartlett sees the gift as a celebration of the SALT Center's history of helping students. When the center was founded in 1980, three students used its services. Now, 700 students make 30,000 annual visits for comprehensive individualized assistance.

The gift is also a way of thanking the University of Arizona and Robbins for creating an environment where students can engage, learn and empower themselves to find academic success for a very bright future, Bartlett said.

"President Robbins has been very supportive of the SALT Center and the Student Success District since he arrived on campus. It is so important for me to have a president who is forward thinking in how we prepare our students in a rapidly changing world. The University of Arizona is a very special place," she said.

The Bartletts are former educators and longtime supporters of the university. Their son is an alumnus.

The Craig H. Neilsen Foundation, which supports research, education and quality of life programs for people affected by spinal cord injuries, has made a gift of $762,000 for scholarships.

The foundation provides students with funding for tuition as well as other needs that help them overcome "whatever acts as a barrier to their education," said Julea Juarez, program associate at the Neilsen Foundation. Students can use the funds for expenses such as books, child care, assistive technology and mobility equipment.

"It's our hope with these funds we can help students make their way through their education and move into professional fields," Juarez said.

One student who has benefited from the foundation's support is Alex Spartz.

When Spartz began his journey as a Wildcat, he was concerned about adapting his learning methods and making new friends. The previous year, Spartz had broken his neck in a swimming accident, which caused partial paralysis.

"I maybe knew one person in my entire dorm from high school. So I had to learn how to become friends with everyone again, but now I was a wheelchair user," he said.

Spartz was given a merit scholarship and an award from the Craig H. Neilsen Foundation that filled funding gaps as costs changed each semester.

"I've loved my experience here, in terms of the Disability Resource Center, the College of Engineering and the dorm community. I never expected people to be as welcoming or understanding," he said.

The Neilsen Foundation has been a longtime philanthropic partner to the Disability Resource Center and the Adaptive Athletics Program.

Coming Together for Students

Every gift matters in the ongoing effort to provide 360 degrees of student support, Roczniak said.

"Not everyone can make a large gift. But if we all do what we can, we will make a tremendous difference in achieving this vision of student empowerment," he said.