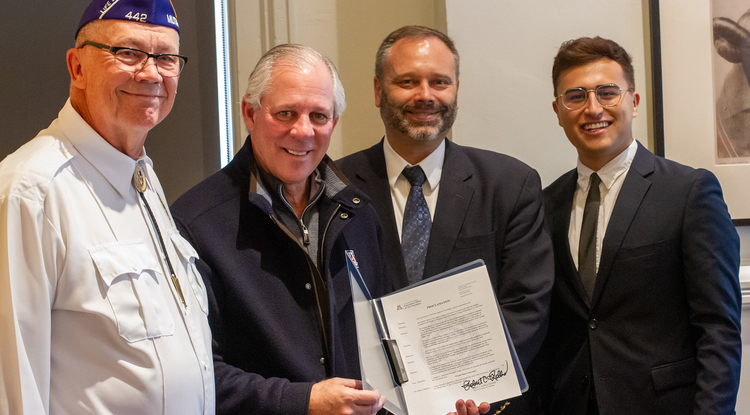 The Associated Students of the University of Arizona led an initiative that resulted in the university being named a Purple Heart University.
Stacy Pigott
,
University Communications
Dec. 4, 2019
Resources for the Media

The Military Order of the Purple Heart has designated the University of Arizona a Purple Heart University in recognition of the university's support of military members, including veterans and their families.

"We have more than 1,800 student veterans at the University of Arizona. Obviously, we are deeply committed to every student we have, but a little extra special are our military students – either active or veterans," Robbins said. "One thing that I think everybody is united behind are the people who served and made freedom a reality. We really are one of the top military-serving universities, and I’m proud of that fact."

In conjunction with Veterans Education and Transition Services, student representatives within the Associated Students of the University of Arizona, or ASUA, led the initiative that resulted in the designation. ASUA leaders compiled evidence that the University of Arizona serves veterans and supports the purple heart recipient community, then worked with the Executive Office of the President and the Military Order of the Purple Heart to make the designation a reality.

The Purple Heart Medal, which was created by George Washington in 1782 as the Badge of Military Merit, is the oldest military award given to U.S. military members. The medal is given to those wounded in combat or to their next of kin if they are killed in action or die from wounds received in action.

In October, the University of Arizona was ranked No. 18 overall and No. 15 among public universities on the latest edition of the Military Times' "Best for Vets: Colleges 2020" list. In May, Military Times ranked the University of Arizona Police Department as one of the top 20 employers of veterans in its "Best for Vets: Employers" ranking. The university also received the Engineering Excellence for Veterans Award from the Military and Veterans Division of the American Society for Engineering Education earlier this year.