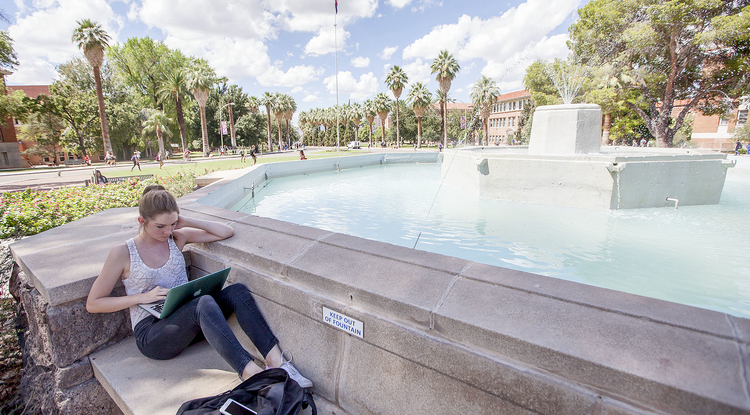 The Eller College of Management again was recognized by U.S. News & World Report for excellence in management information systems, appearing at No. 5, and the James E. Rogers College of Law climbed seven spots to No. 41.
University Communications
March 21, 2018
Resources for the Media

"These rankings confirm the University of Arizona's excellence in a broad range of disciplines," said UA President Robert C. Robbins. "We're proud to see many of our graduate programs recognized as among the best in preparing future generations of researchers, scientists, leaders and citizens. Working together, the next generation of UA alumni will be equipped to create innovative solutions to some of the world's biggest challenges."

Each year, U.S. News ranks schools and programs in business, education, engineering, law, nursing and medicine. The rankings in these six areas are based on expert opinions about program excellence and statistical indicators that measure the quality of a school's faculty, research and students.

Beyond the six disciplines ranked annually, U.S. News also periodically ranks programs in the sciences, social sciences, library sciences, humanities, health and many other areas based solely on the ratings of academic experts.

The James E. Rogers College of Law climbed seven spots to No. 41 on the Best Law Schools list, while also ranking 25th for legal writing.

The UA School of Government and Public Policy tied at No. 34 in the public affairs category — the same ranking it held when the list was last updated in 2016. The UA also came in at No. 19 in public management and leadership.

The College of Nursing's doctorate in nursing practice ranked No. 28 and its master's program rose two spots to No. 39.

The College of Education rose six spots to No. 51 among Best Education Schools.

A number of other UA graduate programs appeared on the U.S. News list, but their rankings were not subject to review in 2018.

For the full set of rankings and methodology, go to: https://www.usnews.com/best-graduate-schools.