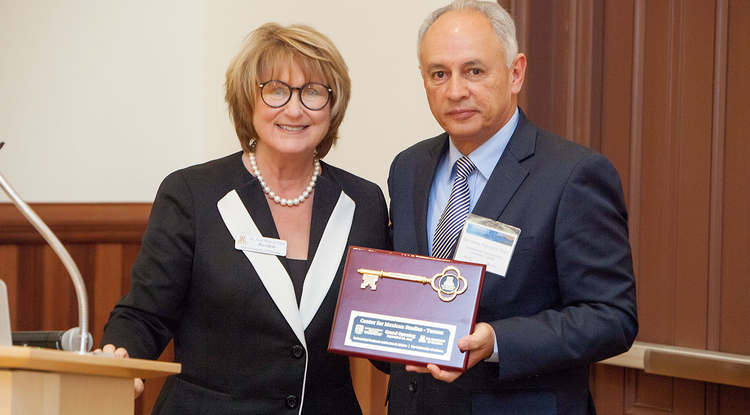 The UA's collaboration with the Universidad Nacional Autónoma de México, the largest university in Latin America, has entered a new stage.
University Relations - Communications
Sept. 30, 2015
Resources for the Media

The University of Arizona's collaboration with the Universidad Nacional Autónoma de México, or UNAM, on a Center for Mexican Studies, which was announced earlier this year and formalized in June with a signed agreement, has entered its next phase.

A delegation from UNAM visited campus for four days of academic and cultural activities related to the inauguration of the UNAM Center for Mexican Studies in Tucson. UNAM, a public research institution based in Mexico City that is the largest university in Latin America, already has four full-time representatives based at the UA at 939 N. Tyndall Ave., working for the center under the direction of Claudio Estrada.

Estrada, UA President Ann Weaver Hart and Francisco Trigo, UNAM's institutional development secretary, were among those in attendance at a dinner held at Old Main on Monday evening that introduced the center’s advisory committee.

"We mean partnership in the broadest human sense," Hart said. "We have different talents, similar interests and a remarkable set of resources."

Hart traced the universities' relationship to 1980, noting that it has included collaboration ranging from astronomy to the arts. In presenting a symbolic key to the center to Trigo, she said the UA has decided to move its Mexico City office — a fixture since 2007, when it was established through the College of Science — onto the UNAM campus there.

Collaborative research has been a focus of the Mexico City office from the beginning. In 2013, the office established a binational consortium to research arid-lands issues facing the Southwest and Mexico. The consortium, a partnership between the UA and UNAM, is funded by Mexico's National Council for Science and Technology, also known as CONACyT, which is the country's equivalent of the National Science Foundation in the U.S.

UNAM has had a presence for years in San Antonio, Chicago and Canada, according to Trigo. He said those offices initially were isolated from universities, and recent affiliations have been located on or near college campuses. These include UNAM satellites in Beijing, Paris, London, Costa Rica and Spain, as well as branches at the University of Washington and California State University, Northridge.

The UA becomes the 11th location outside Mexico for UNAM, which claims an enrollment of more than 340,000.

"The center will begin on solid ground because of the relationships that already exist between our faculties," Trigo said, praising the UA's Mike Proctor, vice president for global initiatives, for his work in helping to establish the center.