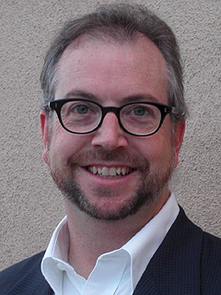 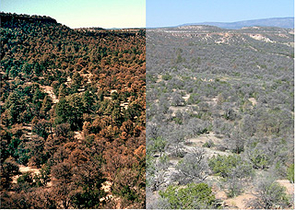 These photos show the massive die-off of pinyon pines that occurred during the recent drought. Pinyons, normally evergreen, have reddish-brown foliage in October 2002 (left). By May 2004, the dead pinyons have lost all their needles, exposing gray trunks. The photos were taken from the same vantage point in the Jemez Mountains near Los Alamos, N.M. Photo credit: Craig D. Allen, U.S. Geological Survey.

The high heat that accompanied the recent drought was the underlying cause of death for millions of pinyon pines throughout the Southwest, according to new research.

"We documented a massive forest die-off  and it's a concern because it's the type of thing we can expect more of with global warming," said research team leader David D. Breshears, a professor of natural resources in The University of Arizona's School of Natural Resources in Tucson and a member of UA's Institute for the Study of Planet Earth.

At study sites in Arizona, Colorado, New Mexico and Utah, the team found that from 40 to 80 percent of the pinyon trees (Pinus edulis) died between 2002 and 2003. The researchers confirmed the massive regional dieback of vegetation through both aerial surveys and analysis of satellite images of those states' pinyon-juniper woodlands.

"Scientists are concerned about how fast vegetation will respond to climate change, but we don't have many examples to test our ideas," Breshears said. "Here we've clearly documented a case that shows how big and fast the die-off can be."

The drought coupled with particularly high temperatures set the trees up to be susceptible to insect infestations. Bark beetles delivered the knock-out punch.

"It was the drought  beetles don't get trees unless the trees are really water-stressed," Breshears said.

Breshears, Neil S. Cobb, director of the Merriam-Powell Center for Environmental Research at Northern Arizona University in Flagstaff, Paul M. Rich, research scientist at Los Alamos National Laboratory in New Mexico, and their colleagues will report their findings the week of Oct. 10 in the online Early Edition of the Proceedings of the National Academy of Sciences. A complete list of authors and their affiliations is at the end of this release. Los Alamos National Laboratory (LANL), the National Science Foundation, the U.S. Forest Service, the U.S. Geological Survey, NASA and the National Institutes of Health funded the research.

Ecologists want to learn more about long-term changes in ecosystems that occur in response to climatic and other environmental variation.

So in 1987, researchers established a study site in the pinyon-juniper woodland zone at LANL. Roughly every two weeks, Breshears and his colleagues measured soil moisture on the 100-by-150 meter plot (about three times the size of a football field). Temperature and precipitation data were recorded at a nearby site. In 1992, the team began tracking tree mortality.

"I could see the plot from my office window," said Breshears, who used to work at LANL. When the recent drought hit, the scientists were well-positioned to compare how the vegetation fared before and during the drought.

Initially the trees managed, but in 2002 the pinyon pines began to die. By the end of 2003, more than 90 percent of the pinyons on the plot were dead. Breshears said, "I would see the trees go from vibrant green to pale, gasping green to pale brown to dropping all their needles."

Pinyon pines all over the Southwest were doing the same thing.

The effect was so dramatic it could be detected by satellite.

Rich and his colleagues at LANL and the University of Kansas analyzed satellite images of the region's pinyon-juniper woodlands for the years 1989 through 2003 using a measure of vegetation greenness known as Normalized Difference Vegetation Index (NDVI). The weekly composite images came from data collected by AVHRR (Advanced Very High Resolution Radiometer) sensors on National Oceanic and Atmospheric Administration satellites.

The region's 60,000 square miles (about 155,000 square km) of pinyon-juniper woodlands became a lot less green starting in 2002, the team found. Moreover, the NDVI measurements for the site at LANL showed that the plot's greenness dropped at the same time and in a similar way.

During a previous multi-year drought in the 1950s, not as many trees died. To see how the two droughts differed, the researchers compared the four driest consecutive years of the earlier drought, 1953-1956, with those of the recent drought, 2000-2003.

"By every measure we looked at, the recent drought was hotter," Breshears said, adding that, if anything, the 1950s drought was drier.

The high heat combined with the extreme dryness put the trees under so much water stress that the attacks from bark beetles finished them off. Under such conditions, the trees cannot make enough pine sap to defend themselves against the insects.

"These trees are slow-growing trees, so we aren't going to have woodlands of this type back in this area for decades," Breshears said. He added that the lack of pinyon nuts will have negative effects on wildlife and on people who harvest the nuts for food and for sale.

Rich said, "The fate of the pinyon-juniper forest depends on what happens next, especially in terms of weather. If it's wetter, the trees may come back. If not we'll probably see shifts to species from drier ecosystems."

Having such a wealth of data and a range of expertise was crucial for figuring out what happened, said Cobb, leader of the Drought Impacts on Regional Ecosystems Network (DIREnet). "The NSF DIREnet project allowed us to bring all these researchers together."

Breshears said the team's next step is developing ways to predict how bad a drought must be to cause such large-scale die-offs.

Breshears, Cobb and Rich's coauthors include Kevin P. Price and Jude H. Kastens of the University of Kansas in Lawrence; Craig D. Allen of the U. S. Geological Survey in Los Alamos, N.M.; Randy G. Balice and Clifton W. Meyer of Los Alamos National Laboratory; William H. Romme of Colorado State University in Fort Collins; M. Lisa Floyd of Prescott College in Arizona; Jayne Belnap of the U.S. Geological Survey in Moab, Utah; Jesse J. Anderson of Northern Arizona University; and Orrin B. Meyers of the University of New Mexico in Albuquerque. The team's paper, "Regional vegetation die-off in response to global-change type drought," will be published in an upcoming edition of the Proceedings of the National Academy of Sciences.