'Unforgettable: The Korean War' to Air Nationally on PBS

The Arizona Public Media documentary, honoring the 60th anniversary of the Korean War, features vets from the Tucson area, including from Arizona's Easy Company, the 13th Infantry Battalion that was activated for the conflict in July 1950.
Steve Delgado
,
Arizona Public Media
June 18, 2010
Resources for the Media
Extra Info:

More information on the documentary, including a preview video, can be found on the Arizona Public Media website at http://originals.azpm.org/unforgettable/.

What:
"Unforgettable: The Korean War" documentary by Arizona Public Media
When:
10 p.m. Monday, June 21
Where:
PBS 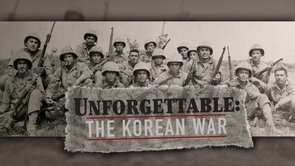 Korea was the un-won war that never ended. No one even wanted to declare it a war: it was "The Korean Conflict," a "Police Action" and finally, "the Forgotten War."

No matter the name, the Korean War killed millions of people and affected hundreds of thousands of lives in the United States.

"Unforgettable: The Korean War," produced by Tom Kleespie and Arizona Public Media, is a powerful journey with Korean War veterans as they recall their memories and emotions of the war and of America in the early 1950s, when young men from across the world were shipped off to defend South Korea against the advancing Communist Army.

The documentary, honoring the 60th anniversary of the Korean War, features vets from the Tucson area, including Arizona's Easy Company, the 13th Infantry Battalion that was the first local Marine Corps. Reserve unit activated for the conflict in July 1950, shortly after the end of World War II.

This program will be the second from KUAT and Arizona Public Media to air to a national PBS audience. The first, in 2008, detailed the UA-led Phoenix Mars Mission.

The Korean War era was a conflicting time for many nations. Former World War II allies suddenly were potential enemies. People who were anxious to enjoy peace and prosperity from the sacrifices of the World War – most of whom had never heard of Korea – now had to digest the news that their loved ones were being shipped overseas yet again.

This program includes Korean War veterans who were part of the international force fighting this conflict.

They share their stories in their own words from their own homes – including moments of heartbreak, fear and victory and times of camaraderie with fellow soldiers.

To help Korean War veterans and their families continue to share their thoughts and memories, and to create greater awareness of the sacrifices and services these vets have given, the producers have launched "Unforgettable: The Korean War Blog," where vets, families and others can connect via the Arizona Public Media website.

No registration is necessary to post comments to messages; the blog is moderated by Kleespie and veteran liaison Erin Deely.